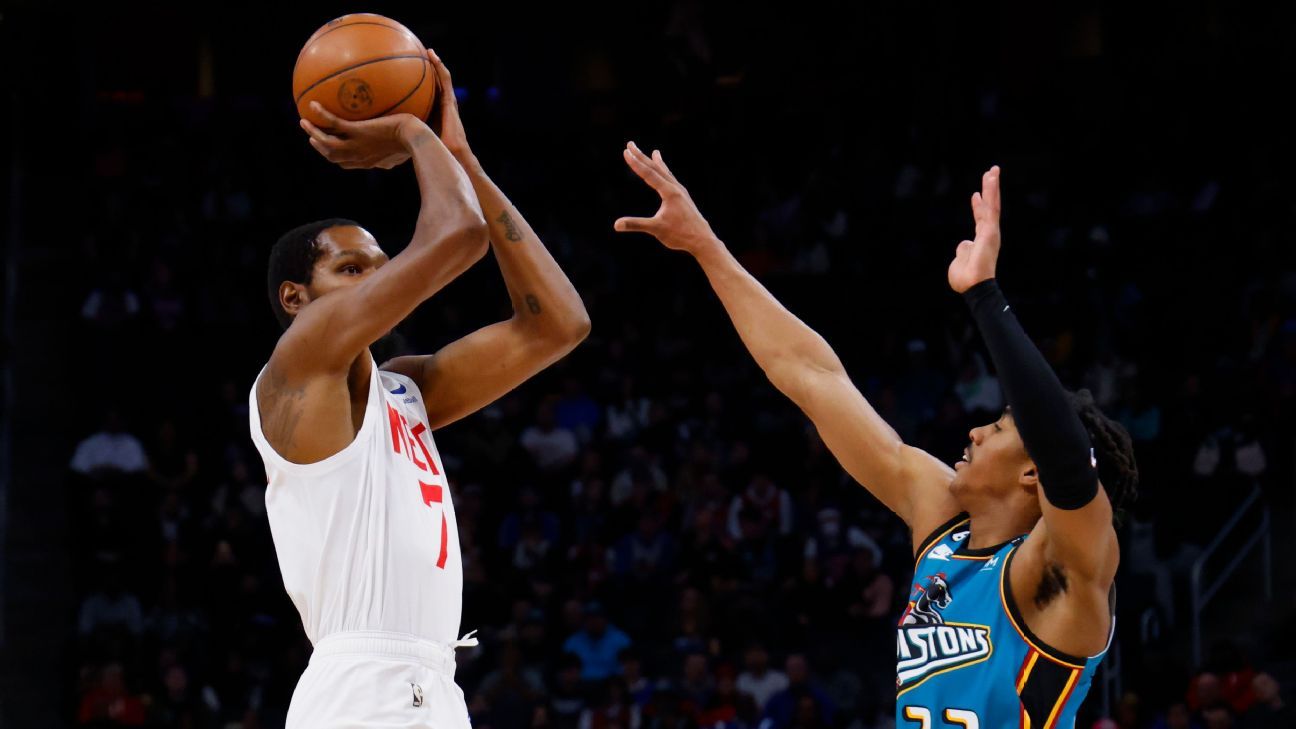 DETROIT — Kevin Durant got so hot in the third quarter of Sunday night’s 124-121 win over the Detroit Pistons that even one of the NBA’s all-time great offensive players lost track of how well he was shooting the ball.

Durant scored 26 points in the third, a career high for most points he’s ever had in any quarter, and finished the game with 43. He wore a big smile after the game while trying to describe the mindset he had after one shot after another went down.

“I usually know how many shot attempts [I have],” Durant said. “But when I forget that’s when I really know I’m super, super in the zone. I don’t know for sure what my shot attempts or my points are. I felt like the ball was coming to my hands so fast so I couldn’t even process it in my mind and I looked up, ‘Damn, I got 39.’ I didn’t think I had that much. But it was good to get back in the game and give us some momentum and energy.”

Durant’s brilliance helped carry the Nets in the second half as they crawled back from a 19-point deficit and earned their sixth straight win. Nets coach Jacque Vaughn had a strong description of what it’s like to watch Durant dominate offensively.

“When the water started running, it started pouring,” Vaughn said.

Durant’s night was made even more special by the fact he passed John Havlicek and Paul Pierce on the NBA’s all-time scoring list after scoring his first six points of the night. He now sits in 16th place all-time.

Durant has played his way into another MVP conversation through two months of the season, but as Vaughn and his teammates agree, the 34-year-old is playing at possibly the highest level of his star-studded career.

“The teams throw everything at him, so that piece of it, I think it warrants that conversation,” Vaughn said. “Just because at the end of the night — you look at the stat sheet and it’s an extremely efficient night … You just see it in a variety of ways, which means his game is getting better still, which is pretty difficult to say but some truth behind it.”

Durant hesitated when asked if this is the best stretch of his career, noting the other unbelievable stretches he’s had during his 16-year career. But he did acknowledge feeling more at ease on the floor than at any other point during his time in the league — because of all the different defensive looks he’s seen through the years.

“I just think mentally I understand the game a little bit more,” Durant said. “I’m not too surprised by anything that’s thrown at me. I could say I’m on a different level mentality wise than I was as a younger player a few years ago. But I felt like I had some great stretches of basketball before, but this is pretty solid.

“I’m having fun, I’m knocking down some shots right now so I can’t compare, I try not to compare, but I feel mentally I’m getting better and I’m starting to understand the game on a different level than I did before.”

After a rocky start on and off the floor, the Nets are having as much fun as they’ve had in the last year, rattling off 10 wins in their last 11 games. There is an ease within the locker room — and on the floor — that is palpable for a group that believes its best is still ahead of them, especially with the way Durant continues to play.

Edmond Sumner summed up how many within the Nets locker room were feeling after watching Durant go 14-for-22 from the field, 12-for-13 from the foul line, grab six rebounds and dish out two assists in 36 minutes.

“I wouldn’t say surprising,” Sumner said with a smile while describing Durant’s latest performance. “But it’s like, ‘Man, this guy is on another level’ … he just keeps taking it up a notch. He’s not slowing down at all.”

Irving just wants his teammates to enjoy the ride that they’re on now with Durant leading the way.

“I definitely don’t take it for granted,” Irving said. “We’ve got to enjoy the time while he’s here, not just as a teammate, but the whole entire world watching. He’s impacted the world of sport, completely, but when he’s doing performances like this on a consistent basis, you can’t take it for granted.”