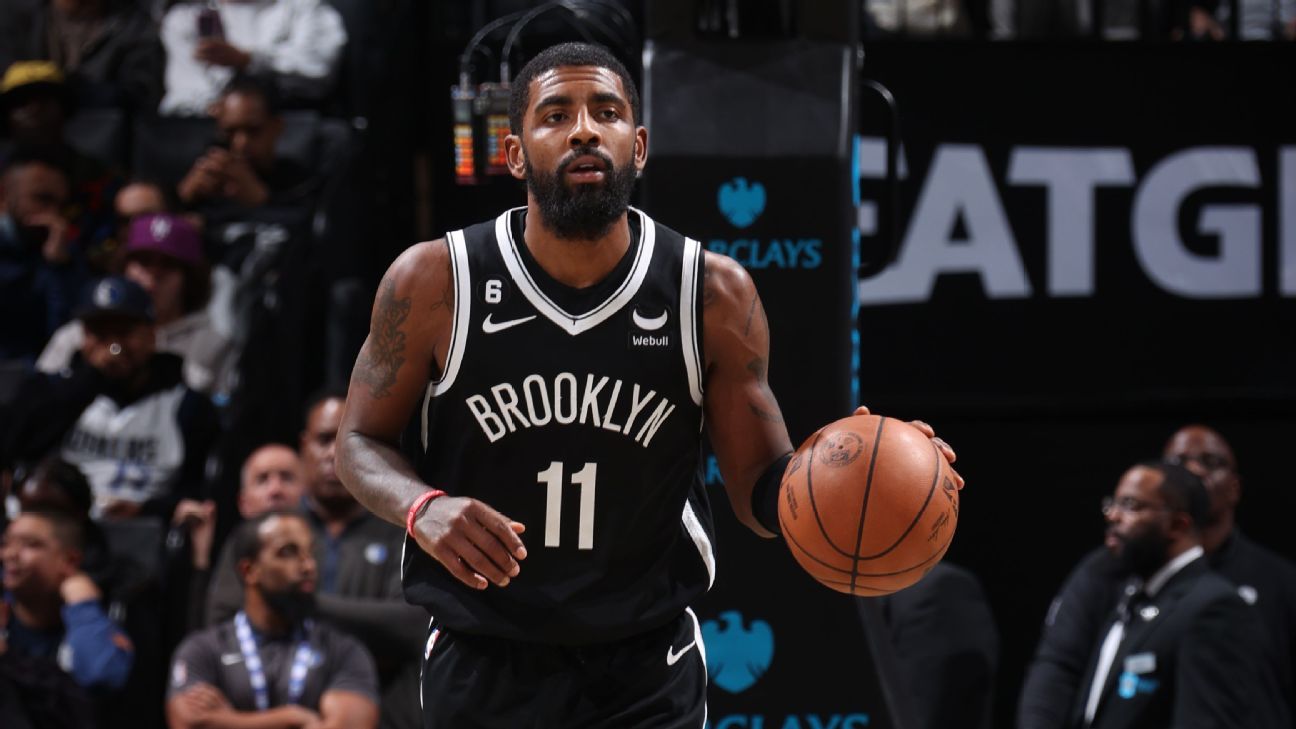 The Brooklyn Nets guard started Sunday night’s game against the Memphis Grizzlies. It marks his first action since he was suspended Nov. 3 for “harmful impact of his conduct” relating to social media posts around a book and movie that contained antisemitic ideas.

Irving reiterated to reporters before the game that he wanted to offer “my deep apologies to all those who are impacted over the last few weeks.”

“I don’t stand for anything close to hate speech, or antisemitism, or anything that is anti going against the human race,” Irving said. “I feel like we all should have an opportunity to speak for ourselves when things are assumed about us. And I feel it was necessary for me to stand in this place and take accountability for my actions because there was a way I should have handled all of this.

“… I meant no harm to any person, any group of people. And yeah, this is a big moment for me because I’m able to learn throughout this process that the power of my voice is very strong. The influence that I have within my community is very strong. And I want to be responsible for that. In order to do that, we have to admit when you were wrong and instances where you hurt people and it impacts them.”

Irving acknowledged that he felt he could have handled the initial response to the posts better.

“It should have been on the first day that I was dealing with all this of just being there for all those that felt like this was antisemitic,” Irving said. “And I should have clarified that I am not antisemitic and I am not anti-anything when it comes to the way I live my life. So the learning lesson for me was just the power of my platform and the impact that it can cause if it’s not taken care of the right way. So meeting with different people within the Jewish community has offered me some clarity on a deeper understanding of what’s going on and the impact that was made and the hurt that was caused.

“That’s why I’m here apologizing. Because I felt it was necessary in my heart to extend the olive branch, the invitation, to let everyone know, not just in the Jewish community, but all races in our world, that I’m here to listen and I’m here to stand with you against any issues that may be plaguing your community. This fight is much bigger than myself, and I’m not alone in this.”

The Nets released a statement Sunday that praised Irving’s subsequent response to the backlash over his posts.

“Kyrie took ownership of his journey and had conversations with several members of the Jewish community. We are pleased that he is going about the process in a meaningful way,” the team said.

The National Basketball Players Association also said it was “looking forward to Kyrie’s return to the court.”

“Over the past several weeks, he has been on a journey of reflection, learning and open dialogue,” the union said in a statement. “Through meetings and conversations with leaders from the Jewish community as well as other thought leaders he’s developed a deeper understanding and has grown personally from this experience.”

As fans filed into Barclays Center before Sunday’s game, they were greeted by dozens of people from Israel United in Christ outside the building. Many within the group — which is a designated hate group by the Southern Poverty Law Center — handed out flyers that had “The Truth About Anti-Semitism” and “The Truth about Slavery” as headlines. Boston Celtics swingman Jaylen Brown retweeted a video of the group with the caption: “Energy.”

Speaking before the game, Irving said after initially coming short of a formal apology for the posts on Nov. 3 then getting suspended, he decided to apologize later that night on Instagram after more reflection.

“I was rightfully defensive that there was an assumption that I could be antisemitic,” Irving said, “or that I meant to post the documentary to stand side by side with all the views of the documentary. … How can you call somebody an antisemite when you don’t know them? How can you call their family out on things that we don’t have a track record of? I have no track record of anything like that. So for me to react that way, it was human. And I had to give myself some grace and give myself some time, to go back home and reflect.”