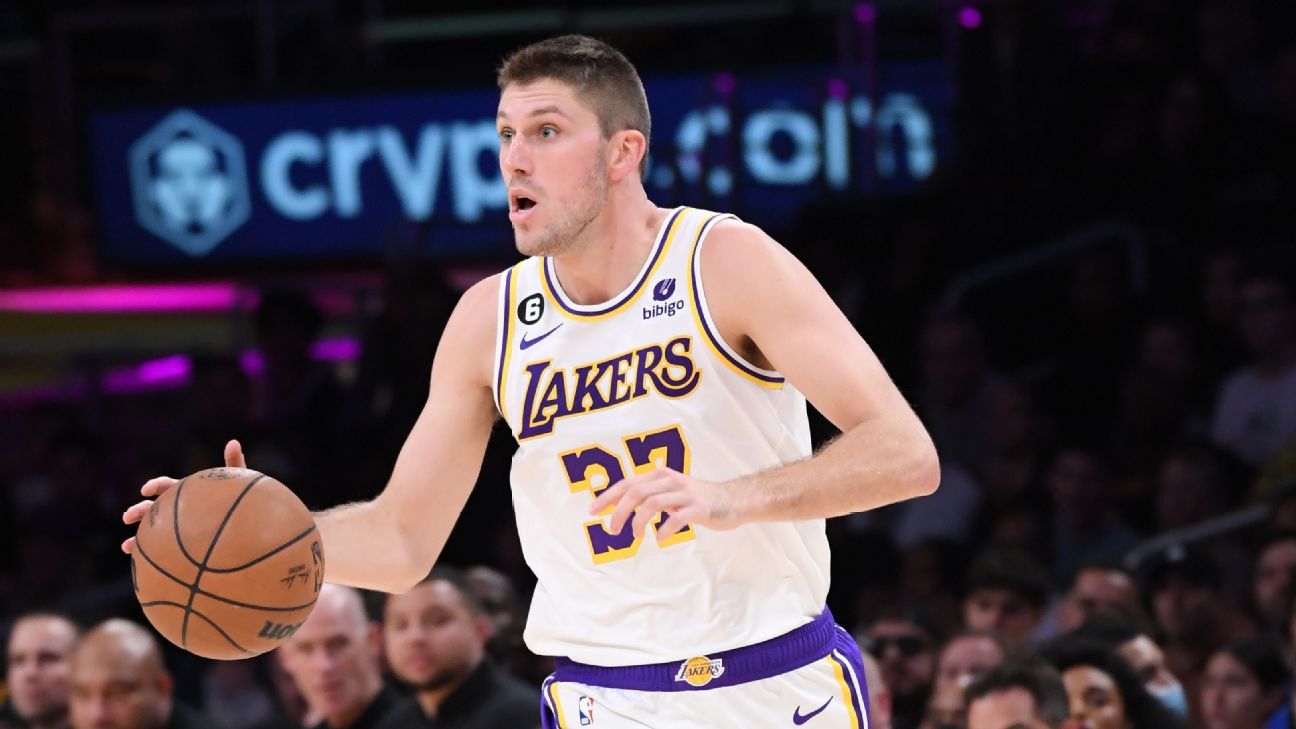 The training camp invitee, who earned a partially-guaranteed contract and a spot in coach Darvin Ham’s early-season rotation, is waiting on the first direct deposit to hit his account.

“I haven’t even gotten a paycheck yet,” Ryan told ESPN, looking back at his buzzer-beating 3 that forced overtime and led to a win against the New Orleans Pelicans last week. “We don’t get paid till the 15th.”

Ryan has to stay on the roster past Jan. 10 to have his $1.64 million salary fully guaranteed. Until then, he is choosing a spartan existence, stretching the $112,000 he earned with the Boston Celtics last season on a two-way contract to take care of his expenses in L.A.

Rather than hit the town after hitting the shot, the 25-year-old Ryan hitched a ride from a team staffer back to the extended-stay hotel he’s bunking in near the Lakers’ practice facility until he finds a place to live. He doesn’t even have a car in L.A.

“I’m definitely not splurging on anything this year,” Ryan said. “Maybe in the next couple years.”

The pennywise psyche fits with Ryan’s humble origin story. While waiting for his big break with an NBA team, he worked as a delivery driver for DoorDash and logged morning shifts at his grandfather’s business run out of a graveyard in his hometown of White Plains, New York, during the pandemic

His precarious position as the last man signed to the 15-man roster mirrors the Lakers’ uneasy spot in the standings, going 2-9 through their first 11 games.

There appears to be a correlation between the two things.

As much as LeBron James has appeared to have a natural rapport with Ryan — even miming a pen in his hand signing a check as an endorsement of the shooter while Ryan was in the midst of hitting six 3s in a preseason game against the Golden State Warriors — the 6-foot-7 forward is one of several unproven players that L.A. is leaning on. Which isn’t something James is accustomed to.

“I mean, we’ve got a bunch of guys that are playing that didn’t play last year,” James said Wednesday. “That are in the rotation. That are, like, playing heavy minutes that didn’t play at all — no matter if it was here or with their respective teams. … So, it’s learning.”

Even though Ryan played just five minutes with the Celtics last season (and still earned a playoff bonus from Boston’s NBA Finals run that he put in a savings account), he has long awaited this opportunity.

Cleveland Cavaliers All-Star Donovan Mitchell, who walked out of Crypto.com Arena after the Cavs played the Lakers last weekend with Ryan’s jersey draped over his shoulder, certainly knows. The two grew up playing on the same AAU team in Westchester County, New York, and Mitchell’s dad and Ryan’s mom taught in the same school district.

“It was kind of just like a [feeling of] finally,” Ryan said of his greeting with Mitchell after the game. “Like, one of them, ‘F—ing finally, we’re here’ [moments].”

But Ryan hasn’t allowed himself to bask in the glow of accomplishment yet. Not that it’s too hard for him to maintain modesty. He can just open up his social media accounts to see fans continue to mention Indianapolis Colts quarterback Matt Ryan on his feed.

“It was annoying at first when I made the team,” Ryan said of the QB comparisons. “I’ve kind of just ignored it now. Just trying to make a name for myself and there’s not much I could do about it. We have the same f—ing name.” 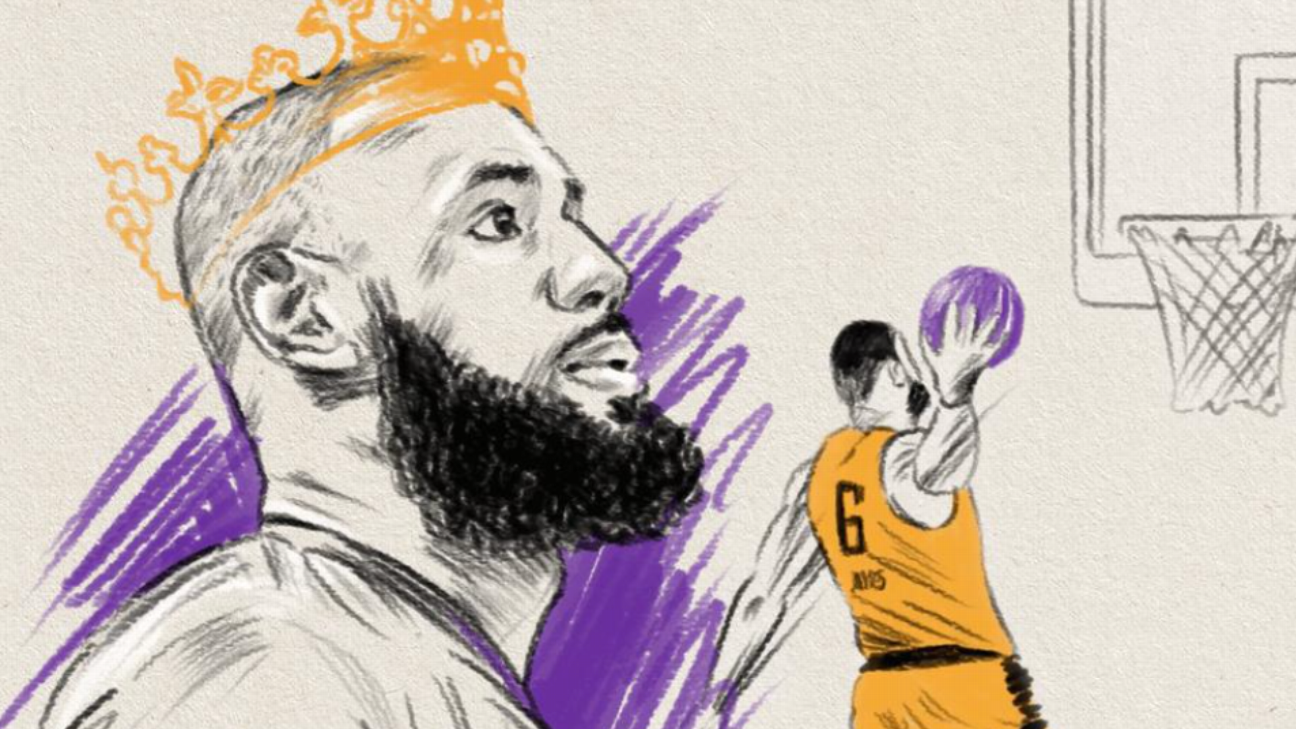 LeBron James is on track to pass Kareem Abdul-Jabbar as the NBA’s all-time leader in regular-season points this season. We’ll have complete coverage all year long.

• Game-by-game points tracker
• A lack of shooters is affecting LeBron
• LeBron, KD and the sign of change
• LeBron’s chase for other milestones

In games, he stays prepared by using timeouts to do defensive slides, change-of-direction agility drills and sprints from the bench to the sideline. Against the Pelicans, for instance, he was subbed out with 6:37 remaining in the fourth quarter and did not return to the game until 1.3 seconds left and the play was drawn up for him to get a shot.

“Even when I stand up to cheer, I do a quick hamstring stretch or hip stretch just trying to stay loose,” Ryan said. “So I was ready to go in. I remember staying loose towards the end of the fourth quarter because it was a close game. I was like, ‘If this gets to a 3-point game, I might have to go back in there.'”

The shot remains remarkable to look back at. For starters, Ham had never practiced the play with his team before.

“Coach drew it up and we executed it,” Ryan said. “It was great.”

Not to mention, Ryan never even saw Austin Reaves throw him the cross-court inbounds pass while he was curling around the screen set by Anthony Davis. “I just remember turning the corner and I think the ball was in the air,” Ryan said.

Ryan doesn’t want to be known as a one-shot surprise.

“I thought my ‘Welcome to the NBA moment’ was after we make that big shot, then we play Utah a couple nights later and I pretty much did nothing,” Ryan said. “One night you might have to save the day, the other night you might literally not be asked to do anything. So it’s just a matter of just staying ready, trying to be as consistent as possible.”

The Clippers are committed to the Kawhi experience — for better or worse
3 moves the Nets can make to turn their season around
‘Getting boring’ jokes Kidd after Luka’s latest feat
Hornets’ Hayward has shoulder fracture, per agent
Kevin Durant breaks a Michael Jordan scoring record