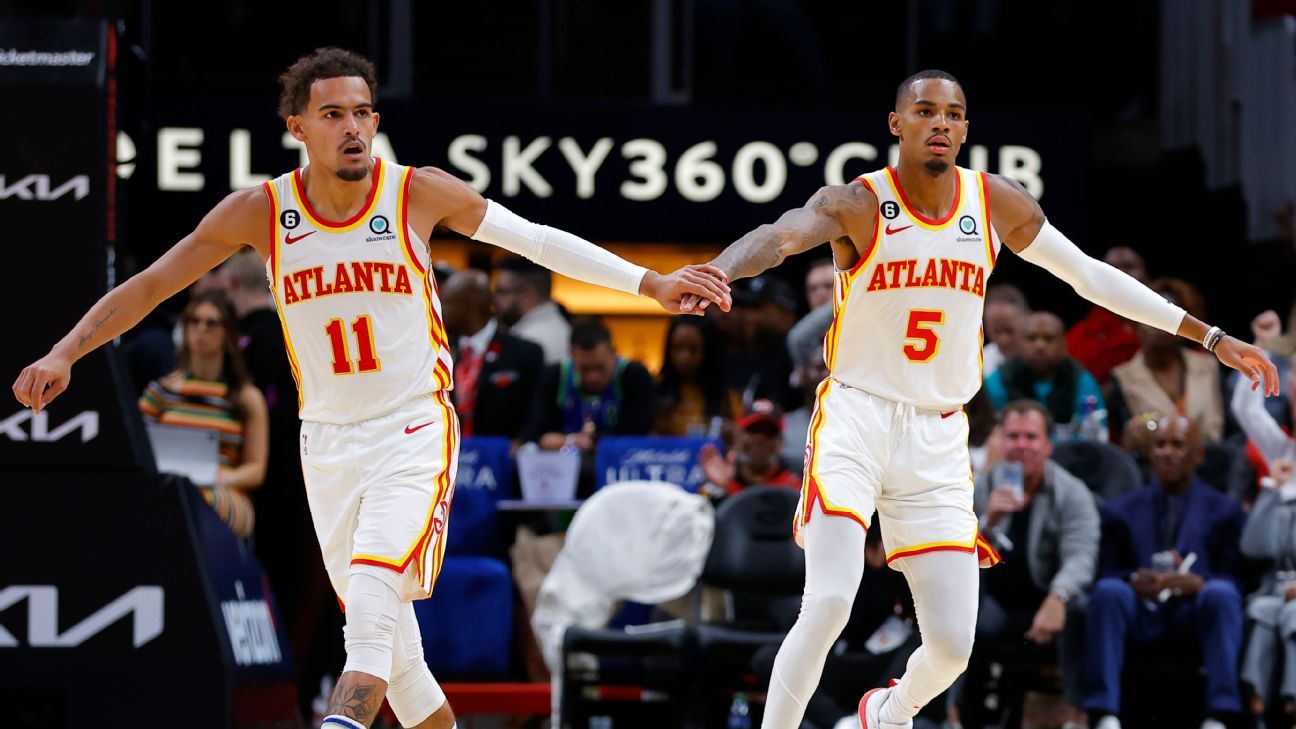 THE ATLANTA HAWKS don’t have a point guard.

It seems like a jarring statement, especially for a team that features Trae Young, who led the NBA in total assists a season ago. This summer the Hawks added Dejounte Murray, who finished fourth in the league in assists per game while playing for the San Antonio Spurs last season.

Two All-Star point guards sharing a backcourt — but neither one a point guard.

That’s how Nate McMillan sees it.

“Those guys I’m calling ‘the guards’ this year,” the Hawks coach said prior to a preseason game in Birmingham, Alabama, last month. “Both guys will be handling the ball and initiating offense.

“We’re doing a little different things than what we’ve done in the past.”

In the past, Young has been the unquestioned leader of Atlanta’s offense. He’s averaged 27.8 points and 9.5 assists per game over the past three seasons, leading the Hawks to a surprising run to the Eastern Conference finals in 2021. But after last season’s disappointing first-round exit, Atlanta brought in Murray to help share the load — and prove the Hawks were serious about being a contender in a stacked Eastern Conference.

The challenge now for McMillan is to figure out how to take two ball-dominant guards and get them to mesh in time to have the same kind of postseason success Young had on his own two years ago.

Or, as Young tweeted when news of the trade broke: “This 💩 just got real.”

THE HAWKS WEREN’T supposed to be an Eastern Conference finalist in 2021. The previous season they went 20-47, so far removed from the playoff picture that they weren’t invited to the NBA’s bubble when the season resumed following the COVID-19 shutdown. The next season got off to another losing start, resulting in the firing of coach Lloyd Pierce after 34 games, at which point Atlanta was 11th in the East.

Atlanta turned things around quickly, going 27-11 under McMillan, upsetting the New York Knicks in the first round of the playoffs, then stunning the Philadelphia 76ers in seven games before falling to the eventual champion Milwaukee Bucks in the conference finals.

That success led Atlanta’s front office to believe it already had a championship contending roster in place — a belief that proved to be misguided.

Running it back with essentially the same group, the Hawks finished 43-39 and were the ninth seed in the East. They won their way through the play-in tournament to gain the eighth seed but fell to the Miami Heat in five games.

The lack of another ball handler alongside Young hurt Atlanta in that series. The Heat defense harassed Young into 31 turnovers in five games while holding him to 15.4 points per game.

This time around, there wasn’t going to be any standing pat.

“We made the decision last year to run the same group back,” Hawks president Travis Schlenk told Atlanta radio station 92.9 The Game in May. “We probably should’ve tried to upgrade, as opposed to stay the status quo.”

Atlanta upgraded by making one of the first big splashes of the offseason, sending three future first-round picks to San Antonio for Murray, who was coming off a career year but played the same position as the Hawks’ resident star.

“Both these guys, Trae and Dejounte, have been guys that have led their teams. Now, they’re going to have to sacrifice. Both of them,” McMillan said. “Because each guy will be playing with the ball at times. They have to sacrifice to be able to adjust and play off the ball which is something I think they are getting comfortable with.”

Young and Murray were quite familiar with each other’s games prior to the trade. Something that went back years in Murray’s case.

“I’ve been watching Trae since he was in high school,” Murray told ESPN. “Knowing he could really play off the ball, he could shoot the ball at a really high level. Just bringing all that into play.”

“I think he’s good at pretty much everything,” Young said. “Defense, scoring, playmaking, he can think ahead. He brings so much to our team.”

It is still early in the season, but the returns have been good. Young is averaging 27.5 points and 9.4 assists per game. He’s also averaging just 3.1 turnovers a game — 10 of which came in Monday’s blowout loss to the Toronto Raptors. His career low is 3.8 set in his rookie season and he’s averaged at least four turnovers each of the past three seasons.

Young and Murray could become just the fourth duo since 2000 to place in the top 10 in the league in total assists, according to ESPN Stats & Information research.

Still, despite the initial individual success and Atlanta’s 4-1 start, the team knows there will be some growing pains in the process, as evidenced by ensuing consecutive losses to the Raptors and Bucks to drop them to 4-3. Atlanta bounced back Wednesday with a victory over the Knicks, led by a 36-point effort from Murray.

There have been small sacrifices for both players, both of whom have seen their touches decrease. Murray (87.5 touches per game) and Young (84.2) both ranked in the top 10 a season ago. This year, Young is averaging 72.5 touches per game while Murray is down to 69.3, placing them tied for 31st and 37th in the league respectively, according to NBA Advanced Stats.

“We’re learning each other, trying to understand the new situation we’re both in,” Murray said. “Pushing each other and just knowing that it’s going be a long journey with ups and downs.”

Young has also seen more catch-and-shoot opportunities with Murray on the floor. After only attempting 77 catch-and-shoot 3s in 76 games last season — and shooting 48.1% on those shots — Young is already averaging 2.0 such shots this season, per Second Spectrum.

While the percentages (31.3%) haven’t been there yet, the opportunities can create more for the Atlanta offense.

For Young, Murray’s presence also means that teams can’t key in on him when he’s on the court.

“If I’m getting trapped or they bring extra attention to me, I’m able to throw it to him and he’s able to make quick reads and playmaker on his own, too,” Young said.

Still, the bigger gains from the Hawks adding Murray to their roster could come on the other end of the court. A season ago, Atlanta had the second-best offense in the league at 115.4 points per 100 possessions. However, the Hawks’ defense gave up 113.7 points per 100 possessions, ranking them 26th in the NBA. They were one of only two teams in the bottom 10 to qualify for the playoffs (the Chicago Bulls at 22nd were the other).

This year the Hawks were in the top half of the league before giving up 123 points and 139 points in the losses to the Bucks and Raptors. The win over the Knicks pushed them back to 20th in defensive rating.

“Some of the best defenders always are good at taking risks and knowing the right times and certain things,” Young said. “And I mean, he led the league in steals last year for a reason.”

The Hawks still have room to improve on that end. In addition to the big numbers given up to the Bucks and Raptors, Atlanta allowed a Charlotte Hornets team playing without LaMelo Ball to score 126 points. But with one guard leading the offensive charge, the other can take control on the other side of the ball.

“I’m coming here to be myself, be a leader, leading by example with my work obviously and being vocal,” Murray said. “Like I said, good things happen over time.

“Ain’t nothing good or great happen overnight. We all know that. Me, from an individual to my teammates, it’s going to be a journey and we’re going to enjoy all of it.”

Ham: Lakers’ late collapse vs. Pacers ‘on me’
Will the Indiana Pacers be buyers or sellers at the NBA trade deadline?
Booker hears ‘MVP’ chants after 51-point outburst
5 NBA players who could be traded before the end of December
Luka after Bucks roll Mavs: Giannis ‘best in NBA’