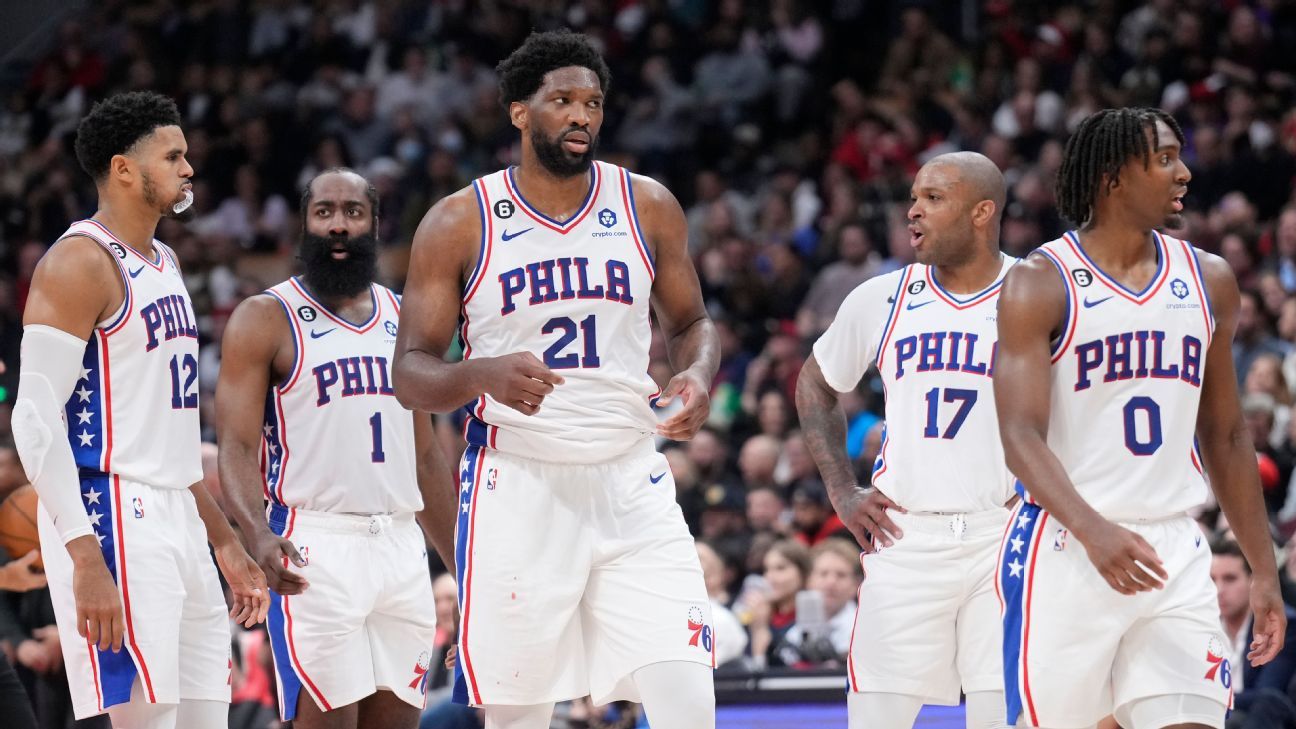 What’s already been a topsy-turvy season for the Philadelphia 76ers shifted once again Thursday, when the team announced All-Star guard James Harden had suffered a right foot tendon strain. Sources told ESPN’s Adrian Wojnarowski that Harden is expected to miss a month.

Philadelphia, which is 4-5 entering Friday night’s game against the New York Knicks, is trying to find a rhythm after a disappointing start for a group that was retooled this offseason around its stars and built for a championship run.

So what does Harden’s foot injury mean for him to the 76ers? How will MVP contender Joel Embiid, Tyrese Maxey and Co. handle the next several weeks? Here are five questions about Philadelphia — and where it goes from here — as the franchise looks to fight out of an early season hole.

1. What’s next for the Sixers while Harden is out?

A difficult stretch in the schedule is just ahead. After facing the Knicks, the 76ers have a run that includes:

And that’s just leading into Thanksgiving — after the holiday, Philly faces the red-hot Cleveland Cavaliers, the Hawks and the Memphis Grizzlies.

In other words: The 76ers won’t be easing into life without Harden.

The fear for Philadelphia is missing chunks of time could be the new normal for Harden, who turned 33 in August and has played the eighth-most minutes of any active NBA player.

Across the eight full seasons Harden starred in Houston (2013 to 2019) he missed a combined 29 games, and never missed more than 10 in a single season.

Harden is one of two players averaging at least 10 assists this season, along with Suns guard Chris Paul. In addition, the 76ers have an assist opportunity rate of 55% when Embiid, Harden and Maxey share the floor, according to Second Spectrum tracking data.

That rate drops to 43.8% when Harden is not on the floor, which would rank in the bottom five in the league.

2. Will November be the month of Maxey?

Entering Thursday night’s action, Maxey had played an NBA-high 340 minutes this season, with Harden’s 331 minutes coming in second. Philadelphia has hardly ever sat both at the same time and often has had them playing together.

For the next few weeks, the 76ers are going to become Maxey’s team full-time as far as lead ballhandling duties go. What already was a prolific start to the season — Maxey’s points per game have shot up to 24.2 from 17.5 last season — will evolve into a heavier burden on his shoulders.

Per Second Spectrum, when Maxey shares the court with Harden and Joel Embiid he averages 16.7 shots per 100 possessions. When he’s out there with just Embiid that number nearly doubles to 32.3.

“It’s amazing how he’s in year three now and he’s confident, he’s running his team, he’s playing like an All-Star,” Washington Wizards guard Bradley Beal said Wednesday after beating Maxey and the 76ers. “He’s super talented and the game is only going to continue to slow down more and more for him, which is even scarier.”

Maxey came into the season tapped as a major breakout candidate. This will be an opportunity for him to not only help keep Philadelphia’s offense — which currently sits fourth in the league — humming with Harden sidelined, but to show he can fill the elite playmaking void alongside Embiid.

3. What version of Embiid will the 76ers get?

This season was supposed to be about Embiid’s dominance and how Philadelphia had finally assembled a roster around the superstar big man that made sense at both ends of the court.

Through the first two weeks of the season, things haven’t gone according to plan.

Embiid has already missed three games — including the past two for a non-COVID illness — and has disclosed that he was dealing with a case of plantar fasciitis over the summer which helped contribute to his sluggish start to the season.

Embiid is still averaging 27.2 points per game on 53.2% shooting from the field, but Philadelphia is still floundering near the bottom of the league in defense — more on that in a bit — and Embiid has grumbled about the ball not moving around the way he’d like it to be.

“We just have to keep playing off of each other,” Embiid said after the 76ers’ opening-night loss to the Boston Celtics. “The ball can’t stick … We’ve got to just keep moving the ball, going to the second action, and it just doesn’t stop at the pick-and-roll.”

Heading into a stretch where Philadelphia will face off against a flurry of star-powered teams, it will be up to Embiid to carry it forward. With the depth of talent across the Eastern Conference this season, no contender can afford a rough few weeks. And Philadelphia’s under .500 start to this point has only exacerbated the need for things to start turning around in a hurry to meet this group’s lofty preseason expectations.

Philadelphia’s highest-paid player (Harris is making more than $37 million in 2022-23) has been a relative afterthought on offense this season. His points per game (13.4) and shots per game (10.7) are his lowest since his second season in the NBA.

Harris is an extremely highly paid spot-up shooter, as more than half his attempts have come from 3-point range and his free throw rate has plummeted.

“He obviously has to get used to … not touching the ball as much as he has in the past,” 76ers coach Doc Rivers said of Harris after Wednesday’s loss to Washington. “And I really think he’s trying to do that … We still want to feature him on the post when he has a matchup.”

There will be plenty more opportunities to feature Harris now.

He had arguably the best stretch of his career late in the 2021-22 regular season and into the playoffs, filling in whatever gaps were necessary alongside Philadelphia’s stars after the team acquired Harden from the Brooklyn Nets at the trade deadline.

Harris, who has averaged at least 17 points per game each of the past five seasons, now has an opportunity to find his place in Philadelphia’s offense next to Embiid and Maxey while Harden works his way back.

While the immediate thought is replacing Harden’s offensive production, the woes at the other end of the court (the 76ers rank 23rd in defensive rating this season) are alarming for a team that added 3-and-D players P.J. Tucker, De’Anthony Melton and Danuel House in the offseason.

Before the season began Embiid declared he wanted Philadelphia to be the best defensive team in the NBA, but the 76ers have started the season allowing more than 13 points per 100 possessions more than the league-leading Bucks.

Harden being out could mean more minutes for defensive stopper Matisse Thybulle, despite long standing issues at the offensive end that forced him out of coach Doc Rivers’ rotation.

“Defensively, we have to connect better,” Embiid said after Philly dropped a third straight game to open the season against the San Antonio Spurs. “We’re not guarding the ball well. We need to work on that. It’s a fairly new team and it’s going to take time to get everyone on the same page.”

‘Teams are looking for a different type of big’: The Cavaliers have two
Luka after Bucks roll Mavs: Giannis ‘best in NBA’
Amazon CEO: Won’t remove film shared by Kyrie
Will the Indiana Pacers be buyers or sellers at the NBA trade deadline?
The Whiteboard: Inner circle NBA contenders are separating