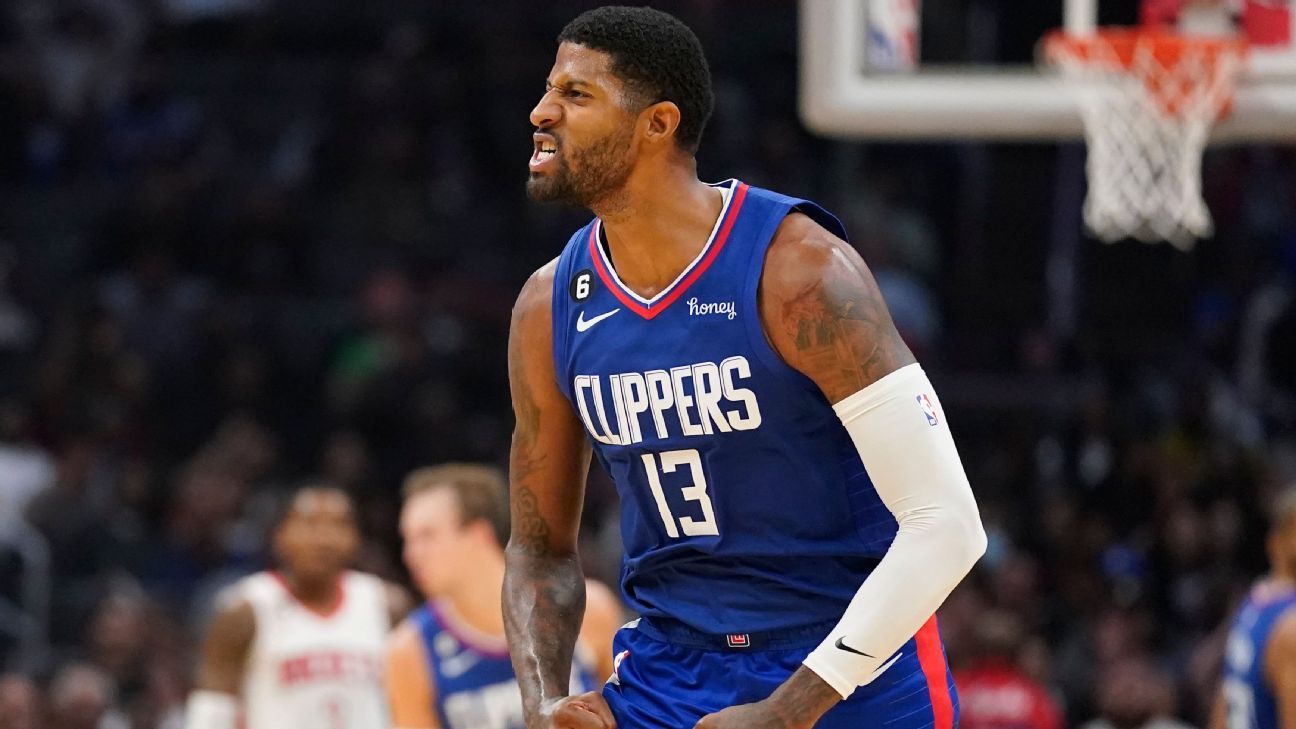 LOS ANGELES — With the LA Clippers on the brink of another demoralizing loss to a lottery-bound team, Paul George backed up his vow to play better by delivering a massive Halloween performance complete with a winning shot to stun the Houston Rockets.

George had 35 points, 9 rebounds, 8 assists and 6 steals and hit two clutch shots in the final 40 seconds to lift the Clippers to a relieving 95-93 win at Crypto.com Arena on Monday night.

Over the past 25 seasons, only James Harden (March 15, 2019) has matched the stats George put up in Monday’s game, according to ESPN Stats & Information research. And the Clippers (3-4) needed every bit of George’s dominant line to beat the Rockets (1-7) and snap a four-game losing streak.

“I take full responsibility for us and our record right now,” said George, who also had two blocks. “Regardless of who is in the lineup, who’s not, I am more than capable of going out and performing and willing our team to wins. So I took a lot of on the chin for myself for the way we have been playing and for the start that we have had so far.”

With Kawhi Leonard (right knee stiffness) out for a fourth straight game and set to miss the Clippers’ next two games at Houston and San Antonio, George was staring at the likelihood of another extremely disappointing loss. The Clippers lost twice at Oklahoma City last week and had averaged just 97.5 points in their four previous losses, dropping those games by 17, 14, 8 and 21 points, respectively.

Several Clippers veterans said after Sunday’s 112-91 loss to New Orleans that they were being outplayed, didn’t play with enough intensity and effort and were playing with little joy. Marcus Morris Sr. said the Clippers were just showing up expecting to win with the talent on their roster.

“It was a lot of weight to it, the style we were losing,” George said of the losing streak. “And no disrespect to any of the teams we’ve been playing, but we’re not playing the heavyweights right now. And the way we were losing these games, it was embarrassing to be honest.”

George then forced Eric Gordon into a critical turnover on the other end for one of his six steals before drilling a 15-foot turnaround over Gordon on the right side for the lead.

George said associate head coach Dan Craig, who is in charge of the Clippers’ defense, challenged him to be the best defensive player on the floor at the start and end of the game.

“After yesterday’s [loss to New Orleans], there was a lot of talk about being more urgent,” George said. “I got a personal challenge … first six minutes, last six minutes — I have to be the best player on the defensive end.”

The Clippers have struggled to start the season under championship expectations. Leonard has played in only two games and was logging limited minutes off the bench since his return from sitting out all of last season because of a torn right ACL. John Wall, who was held out of Monday’s game because it was the second of a back-to-back, has been on a minutes restriction as he returns from not playing last season. And other veterans have been in and out of the lineup.

The Clippers have a rematch with the Rockets on Wednesday in Houston. And they might need another big game from George, who had 40 points, six rebounds and six assists in their win over Sacramento in the second game of the season.

“Hell yeah,” Clippers coach Ty Lue said when asked if this is the George he needs nightly. “Right now while we’re struggling, we need everything, everybody, every point. But tonight was huge. … We need him to play at that kinda level.”

Booker hears ‘MVP’ chants after 51-point outburst
LeBron returns, teams with AD to lead Lakers’ win
Stats show just how right it was to move Russell Westbrook to the bench
3 moves the Nets can make to turn their season around
‘Getting boring’ jokes Kidd after Luka’s latest feat