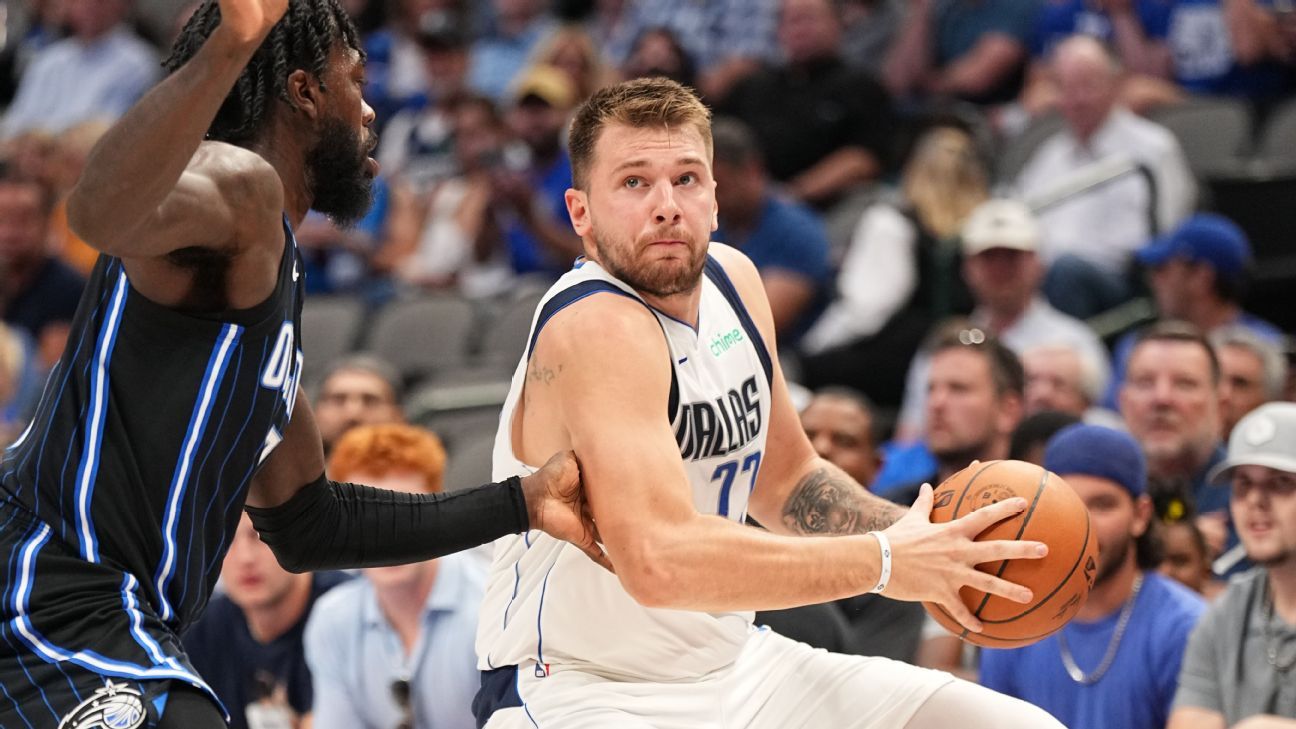 God Shammgod springs to his feet in front of the Dallas Mavericks‘ bench, a big smile on his face, as he discusses one of his favorite subjects: dribbling.

Specifically, in this instance a couple of hours before an Oct. 7 home preseason game, Luka Doncic‘s dribbling.

Shammgod, a Mavericks player development coach who is so renowned for his ballhandling brilliance that a popular move is named after him, begins to demonstrate the simple base of Doncic’s evolution into the league’s leading isolation scorer.

Shammgod jabs with his right foot, rocks back to his left as if he might launch a jumper and then darts back to his right, putting the ball on the floor and mimicking a Doncic drive to the basket. In these moments, the court feels like a canvas for Doncic, who Mavs coach Jason Kidd compared to a young Picasso at the start of last season.

“Luka’s imagination,” Shammgod says, “is just on a whole other level.”

It seems silly now that skeptics questioned the ceiling for a draft prospect with such limited explosiveness. Sure, Doncic had unprecedented success for a teenager in Europe, becoming the youngest MVP ever in the world’s second-best league before entering the 2018 draft. Yet many scouts and executives wondered whether he could blossom into an NBA superstar.

Four seasons later, Doncic has already established himself as a perennial NBA MVP favorite, in part because he’s not only a one-on-one wunderkind but also arguably the league’s premier isolation weapon with one of the league’s deepest bags of tricks.

Doncic isolated on a league-leading 1,027 plays last season, according to Second Spectrum tracking. The Mavericks generated an average of 1.098 points on those possessions, which ranked second among 43 players with at least 300 isolations last season, behind only Miami Heat star Jimmy Butler (1.108).

“Sometimes as a coach you want to run all these plays,” says Kidd, who has frequently surrounded Doncic with 3-point threats, employing five-out offenses to open the floor for him to operate. “But at the end of the day, it’s about getting him the ball with enough time to be creative.”

Blending that creativity with a package of skill, strength, finesse and footwork — as well as the vision to dissect help defenses by passing out of traffic — has turned Doncic into the rare scorer capable of creating efficient shots at all three levels: beyond the 3-point arc, in the midrange and around — albeit rarely above — the rim.

As Doncic and the Mavs prepare to open their 2022-23 season on the road Wednesday against the Phoenix Suns (10 p.m. ET on ESPN), let’s dive into the iso arsenal that makes the 23-year-old superstar one of the toughest covers in the league.

The stepback: ‘The fabric of who he is’

Some of the biggest buckets of Doncic’s career have come via the step-back 3. As a rookie, he capped a personal 11-0 clutch run in a comeback win over the Houston Rockets with a go-ahead step-back 3 over center Clint Capela, slamming the brakes and changing direction so quickly that the 6-foot-10 big man still had a foot in the paint as Doncic started his shooting motion.

The Game 4 buzzer-beater in Doncic’s first playoff series — a rare Mike Breen “BANG! BANG!” moment that put the finishing touches on a 43-point triple-double — was a step-back 3 from his sweet spot on the left wing, setting it up by going between his legs to his right before crossing over and rising above LA Clippers guard Reggie Jackson. Doncic has twice beaten the Boston Celtics with last-second step-back 3s from the same spot.


According to NBA Advanced Stats data, Doncic has attempted 1,139 step-back 3s in his career, including the playoffs. He has made 37.2% of those shots (39.6% last season), which is significantly better than his catch-and-shoot efficiency.

“You want to have it where every dribbling move he does is a part of that [step-back] package, because that’s his favorite shot,” Shammgod says. “Out of any of those moves, he can get to the stepback.”

Doncic’s game shows a lot of similarities to Philadelphia 76ers guard James Harden, who evolved into one of the elite isolation scorers of all time during his Rockets tenure, when his step-back 3 ranked as perhaps the most potent offensive weapon in the league. They’re both big-framed guards with dazzling ballhandling skills and the ability to stop and suddenly dart backwards while maintaining balance.

Like Harden, Doncic hunts for his stepback, especially when he gets a switch against a center who is worried about getting beat off the dribble. If a defender prioritizes taking away his stepback, it’s essentially an invitation for Doncic to drive.

“It’s never the same decision,” Doncic, who studied clips of Harden sent to him by Shammgod early in his career, said during the preseason. “It’s a lot of factors. You’ve got to look at who’s guarding you, if the shot’s going in or not. There’s a lot to think about and then decide.”

Doncic certainly doesn’t have to worry about whether his head coach approves of his shot selection, not that it ever concerned him much.

“That stepback is just natural,” Kidd says. “That’s part of the fabric of who he is, because it can set up so many other things.”

The Baby Dirk: ‘There’s no escape … no counter move’

Deandre Ayton couldn’t have defended much better on the opening possession of Game 7 of the 2022 Western Conference semifinals against the Mavs.

The Suns center helped force the ball out of Doncic’s hands by blitzing a high pick-and-roll. Seconds later, Ayton ended up alone against Doncic when he got the ball back on the left wing.

Ayton stayed patient as Doncic dribbled left to right between his legs once, twice, three times, staying close enough to contest the stepback. With the shot clock down to five seconds, Doncic attacked the middle, driving to his right, but Ayton stayed in front, preventing Doncic from reaching the restricted area.

Doncic lowered his left shoulder to initiate contact, creating inches of space, all he needed to pivot backwards into a one-legged fadeaway from the free throw line.


“Dirk always did it,” Doncic said during preseason, referring to his rookie season teammate Dirk Nowitzki, who made that shot iconic en route to the No. 6 spot on the all-time scoring list. “It’s a fadeaway, so it’s tough to block, tough to defend. It just adds another shot to my isolation.”

It’s a move that Doncic mastered between his rookie and sophomore seasons, essentially adding a midrange escape clause to his isolation game. It’s particularly poetic when Doncic makes the shot from the right side of the floor at home games, considering there are silhouettes there of Nowitzki rising for the shot on both ends of the American Airlines Center court.

Kidd refers to Doncic’s one-legged fadeaway as the “Baby Dirk,” and Doncic is on a list of stars who have borrowed the shot from the Mavericks legend. That includes LeBron James, another big, powerful creator whose clips Shammgod sent Doncic to study.

The one-legged fadeaway has become such a respected part of Doncic’s repertoire that he occasionally embarrasses defenders determined to contest it. Doncic will catch them leaning and continue to pivot through, sometimes leading to a layup.

If Doncic needs to be more creative to get a shot up, he’s certainly capable.

“He’s just having fun with it, and that makes it hard to defend because you think you take one move away and there’s no escape and no other move, no counter move, no nothing,” says Mavs power forward/center Maxi Kleber, a frequent one-on-one foe during practice. “And all of a sudden he finds a way to spin out and somehow shoots left-handed over his head — and he makes those shots.”

Luka, the driver: ‘His slow is fast’

During timeouts, Doncic will sometimes juggle the basketball with his foot, a flashback to his childhood playing soccer in Slovenia. He often displays evidence of his background in that sport while dribbling the ball with his hands, too, with the way Doncic changes direction so smoothly.

“A lot of [basketball players] who play soccer are real crafty — Steve Nash is a perfect example,” says Shammgod, who has worked with Doncic to cover more space in fewer dribbles. “Luka is like that. He’s shifty. He’s got good brakes.

“A lot of people don’t think about that stuff, because they get caught up in the hands. It’s no knock on And 1, but you see all these people on And 1 [mix tapes] who can dribble and all that, and then you put them in the game and they can’t go nowhere. Now, you’re stuck in one spot.

“Dribbling is more about footwork. Hands are just an illusion.”


Shammgod refers to Doncic as “quicker than you think,” and the threat of his stepback often helps Doncic gain a half-step advantage on his defender. Once that happens, it’s extremely difficult for a defender to recover.

“He knows how to use his body, the angles,” Kidd says.

“Harden was the same way,” Shammgod adds. “Once you’re on the side of him, there’s nothing you can possibly do. [Doncic] can score so easy. He’s way too strong.”

Doncic can slither through traffic with his shiftiness or rumble down the lane like a bulldozer, especially when he’s backing down his defender. He often initiates contact, off the dribble or as he’s going up to finish, using his strength to create pockets of space.

With his mix of power, a soft touch and deceptiveness, the 6-foot-7, 240-plus-pound Doncic is an elite finisher despite rarely playing above the rim. He had only seven dunks last season, a total that has dropped in each year of his career. But Doncic converted 69.7% of his attempts within five feet of the rim, ranking second among 43 guards with at least 150 buckets in that range. (Gary Payton II, an explosive leaper with only 36 unassisted baskets all season, ranked first among that group.)

“It’s just amazing how he knows how to let someone fly by when he’s going for a layup,” Kidd says, marveling at how often Doncic shifts gears to allow traffic to clear in the paint.

“When he plays, the only thing he hears is like the music that’s playing in his head,” Shammgod says. “He sees the game in slow motion, no matter how fast it’s going. And his slow is fast, because you’re moving so fast. You’re trying to beat him to the spot, but he’s not at the spot yet, so it’s easy for him to see you get there and change directions.

“He’s always in his comfort zone.”