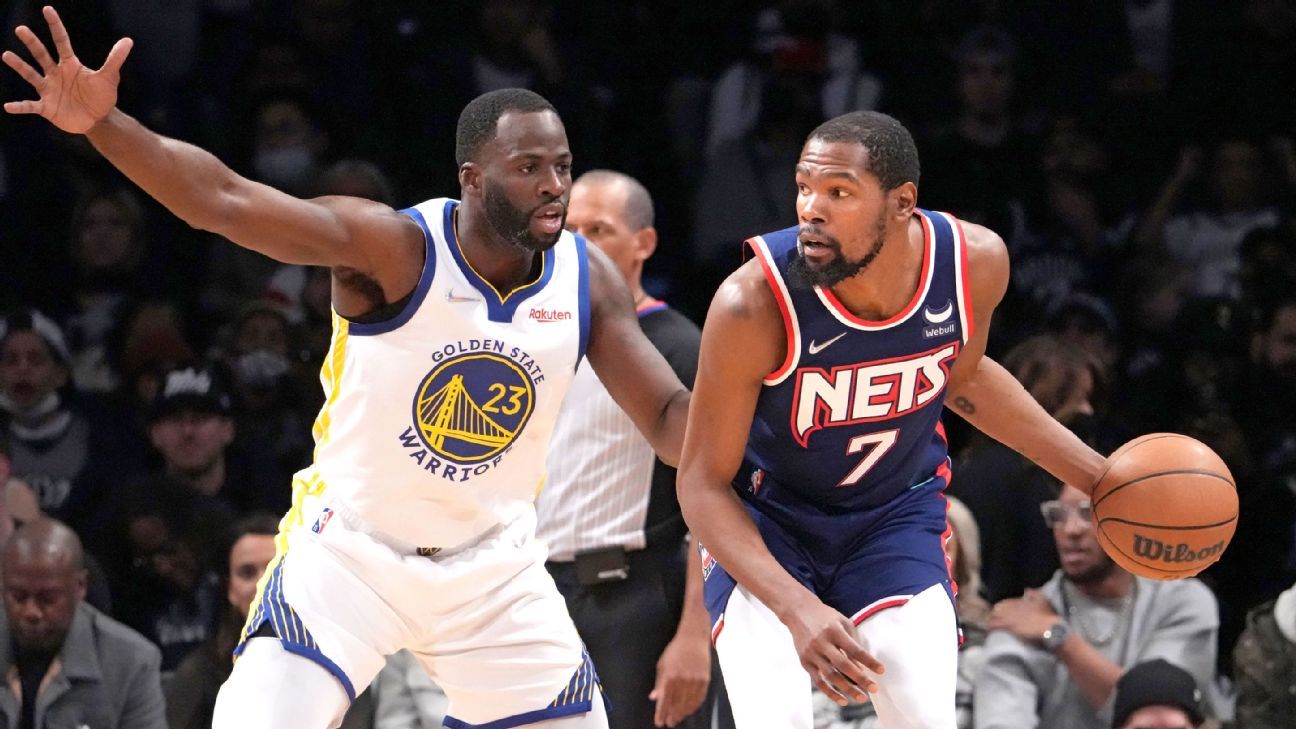 MILWAUKEE — Kevin Durant knows some of the parallels are there.

From a distance, the Brooklyn Nets‘ star forward has watched — like everybody else — the leaked video footage of Draymond Green punching Golden State Warriors teammate Jordan Poole during practice. The defending champion Warriors’ locker room has been hurt by the incident — and the fact that it became public.

At the beginning of the 2018-19 season, an incident between then-Warriors teammates Durant and Green had a similar type of impact within the framework of the organization — a verbal disagreement that got more heated at the end of a game in early November — which carried over into the locker room and threatened to derail the team’s camaraderie.

Durant and Green ultimately healed their relationship, and the Warriors went about their business, something they’re trying to do again almost four years later in the wake of this latest episode. But as Durant watches the process unfold, he sees a stark difference between then and now.

“That’s not the same situation,” Durant told ESPN. “Somebody got punched in the face … It’s no comparison to that. It was just some words that being — I heard people say that that happens a lot in the NBA. I had never seen nothing like that before. But what me and Draymond did a few years back, that s— happens all the time. So it’s easy to get through something like that, but I don’t know what this situation is like.”

Durant, who played for the Warriors for three seasons and won NBA championships and NBA Finals MVPs in 2017 and 2018, said he has not spoken to Green, who is taking some time away from the team.

Although Durant and Poole, who was drafted by the Warriors in 2019, never crossed paths as Golden State teammates, they have built up a bit of a relationship thanks to their shared relationship with multiple members of the Warriors coaching staff. Durant noted, however, that his friendship with Poole is not “to the point where I can text him or call him and talk to him about it.”

“It seems cool, everybody’s back to normal,” Durant said. “Draymond is playing next game, Jordan was playing last game. So I guess it’s back to normal. Anything around our sport that doesn’t just involve the game of basketball — once it gets to that type of stuff, I try to stay away from it. It has nothing to do with anybody else but those people in the locker room.”

While the clear difference is that Durant and Green never exchanged punches during their 2018 verbal exchange, the tenor of the disagreement hovered over everything the Warriors organization did in the ensuing days and weeks.

Durant and Green patched up their disagreement much quicker than they were given credit for, but the intensity of the incident, along with the uncertainty surrounding Durant’s pending free agency, hung over Warriors players and coaches all season.

Now, the Warriors have to overcome the same type of internal strife.

Knowing the inner workings of that particular locker room, Durant is confident the Warriors will find a way to overcome the latest setback. Stephen Curry is universally respected inside and outside the organization for his calming demeanor and ability to unite his group when times are tough, and Durant knows that what makes the Warriors great as an organization is their ability to draw on leadership from a variety of different levels.

“I think the best thing about the Warriors is their mantra’s been ‘Strength in Numbers’ that whole time,” Durant said. “And it’s always been a collaborative effort with everybody there. So Steph is not alone in trying to gather everybody. I’m sure Andre [Iguodala] is helping him. I’m sure [Kevon Looney] is helping him. I’m sure Bob [Myers] and Shaun [Livingston] and Klay [Thompson] and just the guys that have been there are helping him as well.

“So you can’t deal with something like that by yourself. Steph knows that, Bob knows that. I know that from being a part of that group, that they do everything as a collaborative effort, so I’m sure they’re all talking internally as a group to see what’s the best way to move forward.”

Durant said that, during a decade and a half in the NBA, he can’t remember seeing another player getting punched like Poole was.

“It’s rare,” Durant said. “It’s rare. I’ve been in the league 16 years, and I’ve never seen that until the other day on camera. You hear about it with MJ and you hear about it with Bobby Portis, but there’s nothing that’s happening every year. It’s very rare that something like that happens.

“It’s none of our business. But it happened to be part of our daily conversation because we’ve seen the videos. We’ve all got our opinions, but to be honest, mine’s don’t matter. It is what it is.”

Durant’s current teammate, Kyrie Irving, said he had seen similar kinds of incidents throughout his time in the game, including on the NBA level.

“The No. 1 thing is protect yourself at all times. But as a teammate for Jordan — he’s a good kid — we don’t expect things like that to happen. And when you see something like that, you feel for a brother because it’s like that feeling of empathy of ‘If I’m in that moment, what do I do?’ And we don’t know because we’re not Jordan, we’re not Draymond. I pray that Draymond gets what he needs and JP comes back and stays focused and doesn’t allow anything to distract him.”

Durant acknowledged that Green’s punch has been a topic of conversation within the Nets locker room, just as it has throughout the NBA since the video was leaked last week.

“We can’t say we haven’t talked about that,” Durant said. “That wouldn’t be genuine. I think everybody, that was a conversation in everybody’s locker room. But what does me exposing that, how does it help the story at all? So we’ll keep that to our little conversations in here, just like they’re going to keep whatever they’re doing under wraps in Golden State.”

Durant, who has rebuilt his relationship with Green over time and won a gold medal with him last summer at the Tokyo Olympics, is hoping that his former team can move past its latest jarring experience, but he made it clear several times when asked about the Warriors’ proceedings that “it’s none of my business.”

“I know that group,” Durant said. “That’s a strong group, tight-knit group. And I just hate to see that be seen in the public, what’s going on in practices and stuff. But hopefully they get that figured out and we can move forward.”