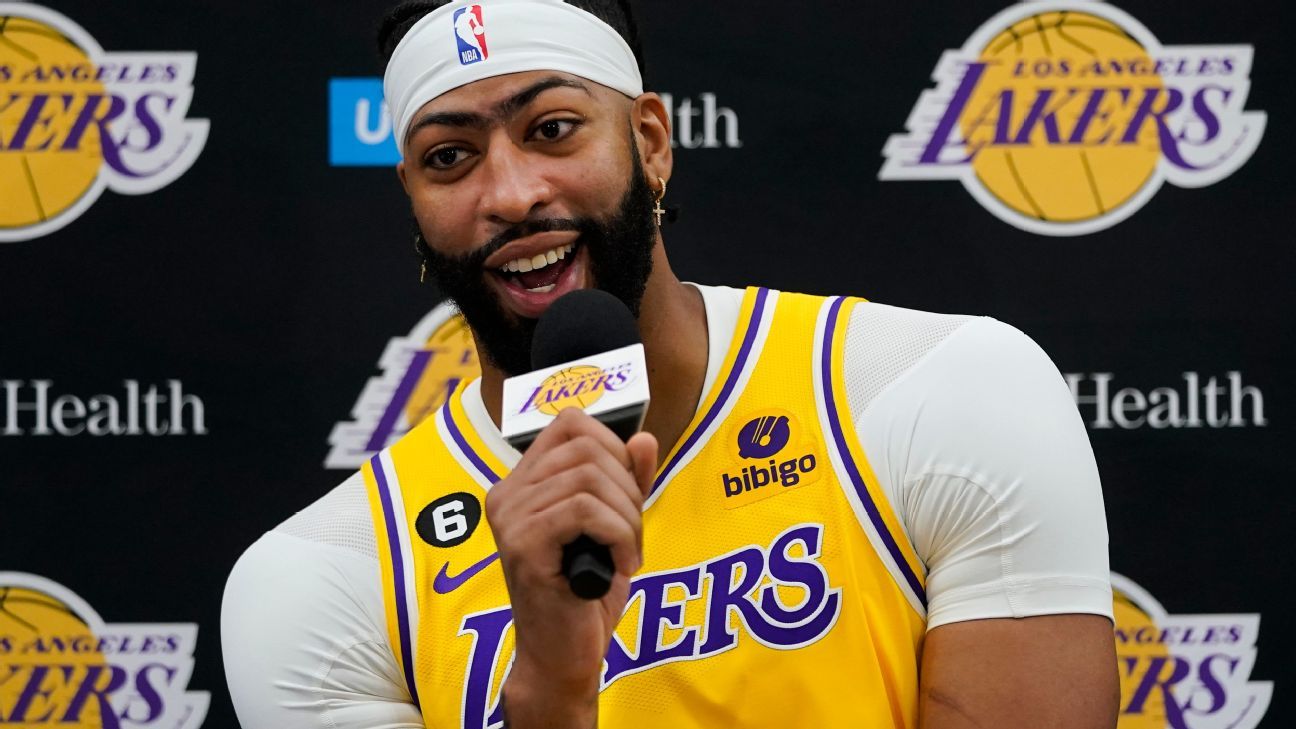 EL SEGUNDO, Calif. — With reams of championship banners hanging above him, a couple of surefire Hall of Fame teammates present in the gym with him and a team roster that will cost the Los Angeles Lakers a hair under $175 million, Anthony Davis‘ statement about the upcoming season sounded almost unthinkable.

“We’re treating this season like we have a chip on our shoulder. We’re the underdogs,” Davis told ESPN during the team’s annual media day on Monday. “Obviously, the world is looking to see what we do. But … they’re not talking about us, and that’s fine. You know, we’d rather be under the radar.”

The Lakers? Underdogs? With this team? It’s a bit of a stretch. However, Davis’ declaration only served to underscore just how disastrous last season was for L.A. when, after coming in as the betting odds’ favorite to win the championship, the Lakers didn’t even qualify for the play-in tournament.

Davis missed 42 games with ankle and knee injuries. LeBron James sat out 26 games. Russell Westbrook struggled to fit in during his first season with the team. L.A. whiffed on several veteran free-agency signings. The Lakers ranked 21st in team defense and 22nd in team 3-point shooting. Coach Frank Vogel was fired, less than two years after guiding the franchise to its first title in a decade in the NBA bubble in Orlando, Florida.

Davis vowed to get the Lakers back on track by approaching this season like he did when he was first traded to L.A. in 2019-20 and said he felt like he had something to prove after not experiencing significant team success in New Orleans.

“Be more aggressive,” Davis told ESPN. “I started getting in my own head a lot last year. I don’t think a lot of people know that … Just knowing how much better I could have been.”

He wasn’t the only one who struggled. Westbrook never found a consistent comfort level playing for Vogel, something Westbrook said that he and new coach Darvin Ham have already established.

“Me and Darvin have been in communication since Day 1,” Westbrook said. “Just being able to connect with him right away was extremely important to me.”

With that connection, Westbrook said he is open to whatever coaching Ham provides, even if that means coming off the bench, something Westbrook has done only 17 times in 1,021 career games and not since his rookie season.

“Whatever I’m told, I’m told,” Westbrook said. “I’m just happy and blessed to be able to play the game I love.”

Westbrook will have a leg up on the starting point guard competition to begin training camp, however. Lakers vice president of basketball operations and general manager Rob Pelinka said that Dennis Schroder, signed to a veterans minimum contract earlier this month, is “working through visa issues” in his home country of Germany and might not be able to report to the team for another week.

Both Ham and James anticipate a turnaround season for the 2017 league MVP.

“He’s been awesome,” Ham said of Westbrook. “Everything I’ve asked of him, he’s done. … Anytime we call on him, talk to him, everything has been about being selfless, being team-oriented, having a defensive mindset and holding him to that — words that came out of his own mouth that, you know, that he’s going to be at a very high level defensively along with the rest of our roster.”

“I look forward to being a part of the journey with him this year, and I’m looking forward to a great year for him,” said James, who is embarking on his 20th season in the NBA. “And I’m going to be right there with him.”

As long as Westbrook is still wearing purple and gold, that is.

Pelinka said Westbrook is a “great part of our team,” but the Lakers executive added, “If we have to continue to upgrade our roster throughout the season, we will.”

Pelinka explained that if that means parting with the Lakers’ 2027 and 2029 first-round draft picks in a trade that involves Westbrook, he will be open to it for the right deal.

“Let me be abundantly clear: We have one of the great players in LeBron James to ever play the game, and he committed to us on a long-term contract, a three-year contract,” Pelinka said, alluding to the contract extension James signed in August that will keep him in L.A. through the 2024-25 season. “So of course, we will do everything we can, picks included, to make deals to give us a chance to help LeBron get to the end. He committed to our organization. That’s got to be a bilateral commitment, and it’s there.”

Before a decision is made whether shaking up the roster with a trade is needed, Ham wants to see how this group commits on the defensive end.

“We’re going to be able to get stops,” Ham said. “We should be able to be one of the elite defensive teams. We’re going to put the work in. … We have the personnel for it. And now it’s just all about activating and making it come to fruition.”