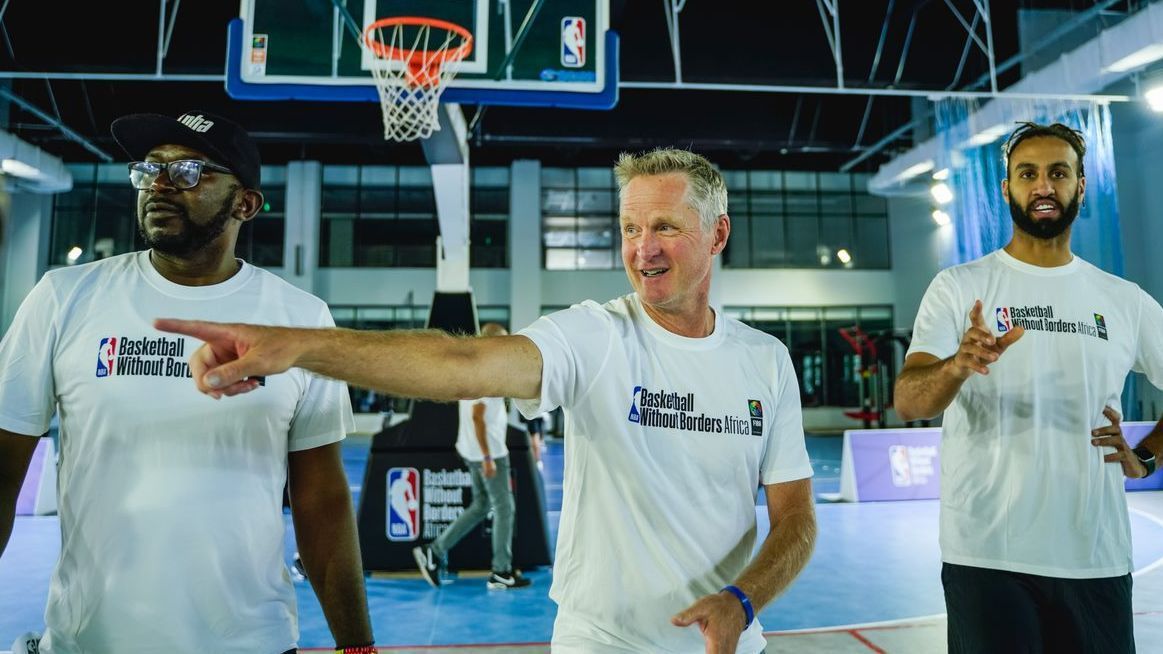 CAIRO, Egypt — Golden State Warriors head coach Steve Kerr has made a long-awaited return to Cairo, where he spent three years in his teens, to coach campers at the NBA and FIBA’s Africa Basketball without Borders programme.

Kerr, who was born in Beirut, Lebanon, spent time in Egypt as a child because of his father’s academic career in Middle Eastern studies, and had not been back to Cairo since 1985 until this past weekend.

Kerr made it a family affair, he told ESPN at a media event on Sunday. “I wanted to come to Cairo [for BWB], I haven’t been back here since 1985,” he said.

“I brought my family — I brought my wife, my daughter, her husband — it’s great to be visiting Egypt again, and doing so while coaching and being a part of BWB made it a perfect trip.”

Kerr, 56, attended Cairo American College (CAC) for three years in his teens while his late father was a visiting professor at the American University of Cairo. His father, Malcolm Hooper Kerr, was killed in a terror attack in Beirut in 1984.

Although Kerr’s main connection to the Middle East is gone, he has not forgotten his roots and even took time to visit his old school.

He said: “I had a chance to visit the [CAC] campus a couple of days ago and go talk to the school teams, boys’ and girls’ teams, visit some of the coaches and the teachers, so it was a great experience.”

Kerr is also famously a soccer fan and supports Liverpool, a connection that also relates to his time in Egypt: Pharaohs star Mohamed Salah.

But while Kerr loves Salah’s work on the field, he’s also a big fan of his humanitarian work off it: “I started following the Premier League maybe five or six years ago and I had seen Mohamed Salah play and read about him.

“I was just so impressed by his character and what he had done in his hometown, helping to build a school.

“I knew how beloved he was in Egypt, so I said: ‘That’s my guy!’ I wanted to cheer for Mohamed Salah and when I found out he played for Liverpool, I said: ‘OK, that’s my team!’ So, I’ve been a Liverpool fan ever since.”

With a basketball legend! pic.twitter.com/NVMLOvtvCf

Kerr, who won five NBA championships as a player (three with the Chicago Bulls and two with the San Antonio Spurs), is used to being admired, but even he was starstruck when he met Liverpool manager Jürgen Klopp.

“I’ve gotten to meet some of the coaches. I met with Jürgen Klopp the other day in Liverpool, which was a great thrill. Watching the game, it’s very similar in terms of concepts,” he said.

“Even though there’s 11 players in soccer and only five in basketball, it’s still very much a game about three people — whoever has the ball and whoever is closest to that player — and being able to pass and move in small triangles across the court or the pitch; trying to beat your man and beat the defender with cutting and spacing, it’s all very similar.

“I’m still trying to learn more about soccer — I’m not an expert — but I enjoy watching it, and I feel like I’m always learning something.”

Despite downplaying his knowledge of the sport, Kerr did not hesitate when asked who he expected to win the UEFA Champions League this season.

“Liverpool,” he said with a smile.

Udoka Azubuike (Utah Jazz), Mo Bamba (Orlando Magic) and Boston Celtics duo Malcolm Brogdon and Grant Williams are the current NBA players present in Cairo as they seek to help 64 boys and girls aged 18 and under from 25 African countries follow in their footsteps.