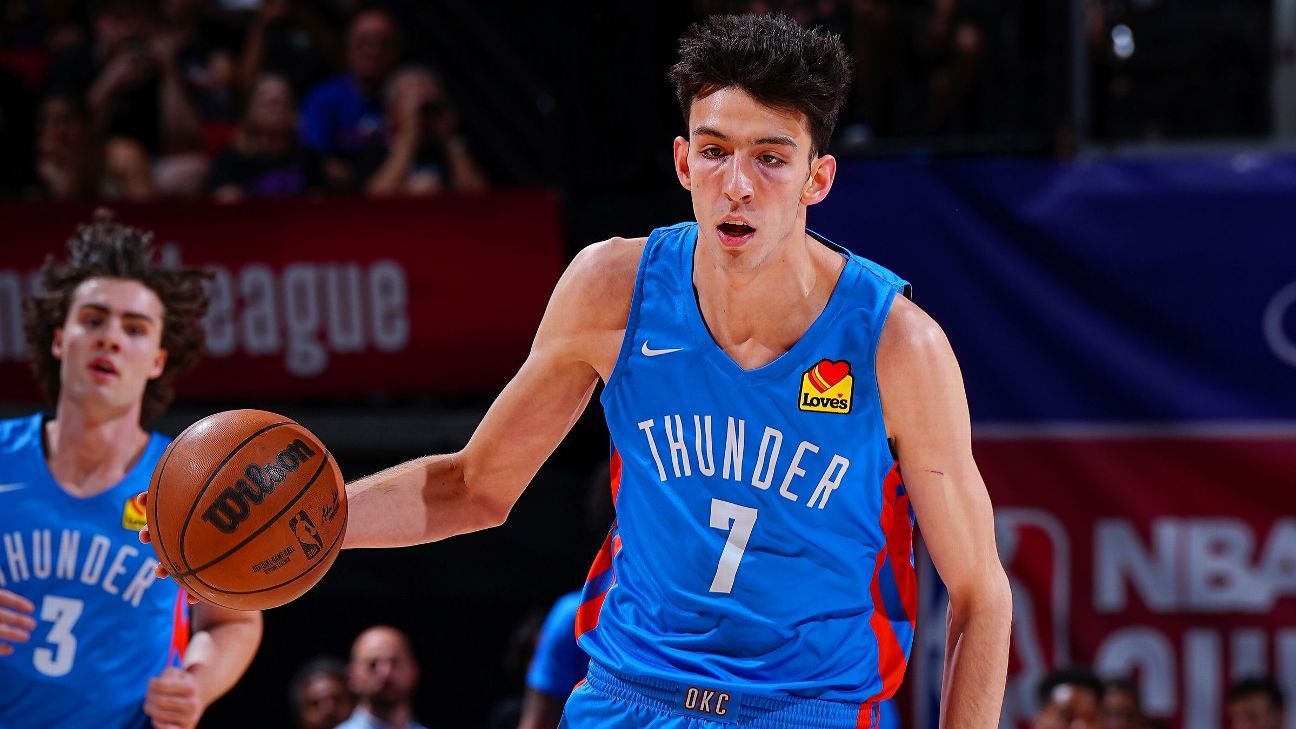 Oklahoma City Thunder rookie Chet Holmgren will miss the 2022-23 season because of a Lisfranc injury to his right foot, the team announced Thursday.

Holmgren, the No. 2 pick in the NBA draft, suffered the injury early in the CrawsOver Pro-Am event while defending LeBron James on a fast break.

“Certainly, we are disappointed for Chet, especially given the excitement he had about getting on the floor with his teammates this season,” Thunder general manager Sam Presti said in a statement. “We know Chet has a long career ahead of him within our organization and the Oklahoma City community. One of the things that most impressed us during the process of selecting Chet was his determination and focus. We expect that same tenacity will carry him through this period of time as we work together and support him during his rehabilitation.”

Presti told reporters later Thursday during an availability session that Holmgren will have foot surgery after the Thunder consulted with three of the nation’s top foot specialists. Presti confirmed that Holmgren suffered a ruptured tendon in his foot and not a fracture, noting that the Thunder were optimistic about his long-term recovery but that they would be “extremely conservative.”

“Something positive will come from this,” said Presti, who said that Holmgren already has resumed weight training and shooting exercises without applying pressure to his foot.

Holmgren’s size was a frequent topic of debate throughout his lone season at Gonzaga and during the weeks leading into the draft, as critics questioned whether his 7-foot-1, 195-pound frame would withstand the physical rigors of NBA basketball. Presti emphasized, however, that the “contact injury” was unrelated to Holmgren’s size.

Holmgren was one of a number of NBA players to participate in the pro-am, along with James, Jayson Tatum, No. 1 pick Paolo Banchero, Dejounte Murray and Aaron Gordon.

The game was canceled in the second quarter because of the condition of the court. The unusually humid day in Seattle combined with a full crowd caused repeated wet spots and condensation. Presti said he did not consider the condensation to be a factor in Holmgren’s injury.

The NBA considers the pro-am a sanctioned activity, meaning Holmgren’s future earnings will not be in jeopardy if he does not fully recover from the injury.

The Thunder will receive an insurance reimbursement of 80% of Holmgren’s per-game salary — about $4 million — after he misses 41 games this coming season.

Presti said the injury won’t prompt the Thunder to give up and tank for a better position in the 2023 draft, as some fans have suggested.

“We just have to focus on what we can control, and I think that we have a group of guys that will continually get better for quite a long time,” he said. “But we’re still scaling the mountain in the Western Conference, and we have to see where that goes. We come into every season the same way since 2008, which is we have to wait to see how the season unfolds.”

Holmgren averaged 14.0 points and 8.4 rebounds in five games earlier this year at the Las Vegas summer league. Presti said Thursday that Holmgren was “having a monster summer” and that he will “be a force” when he returns to the Thunder.

A high draft pick having to sit out his first NBA season isn’t unprecedented, and in some cases, it hasn’t stopped players from reaching All-Star or even MVP-caliber levels.

Ben Simmons went No. 1 in 2016 and missed the next season with a foot injury. Blake Griffin was the top pick in 2009 but had to sit while recovering from a knee injury, as was the case with No. 1 selection Greg Oden in 2007.

Reigning NBA scoring champion Joel Embiid was the No. 3 pick in 2014 and missed his first two seasons with foot issues. Nerlens Noel was the No. 6 selection in 2013 and missed what would have been his first season with a knee problem, and Michael Porter Jr. was the 14th pick in the 2018 draft and missed the ensuing season with a back injury.

“I don’t think missing the first year is really going to change the outcome,” Presti said Thursday when asked about Holmgren’s long-term outlook.

It even happened previously to the Thunder franchise: Nick Collison was the No. 12 pick in the 2003 draft by Seattle, unable to play that next season with shoulder issues. Collison went on to spend his entire career with the Thunder, getting his No. 4 jersey retired — the first such honor bestowed by the team in the Oklahoma City era — and remains part of the team’s front office.

Presti indicated that Collison would be involved in Holmgren’s recovery.

There have been other instances of lottery picks missing what could have been their rookie years, including Jonas Valanciunas — the No. 5 selection in 2011 — not being able to join the Toronto Raptors until a year later because of his contract status with his European team at the time. Dario Saric and Ricky Rubio were lottery picks who played with their overseas clubs for two more years before coming to the NBA.

And some lottery selections never get to the league at all: Orlando chose Fran Vazquez at No. 11 in 2005, but the Spanish big man never appeared in an NBA game.

ESPN’s Bobby Marks and The Associated Press contributed to this report.