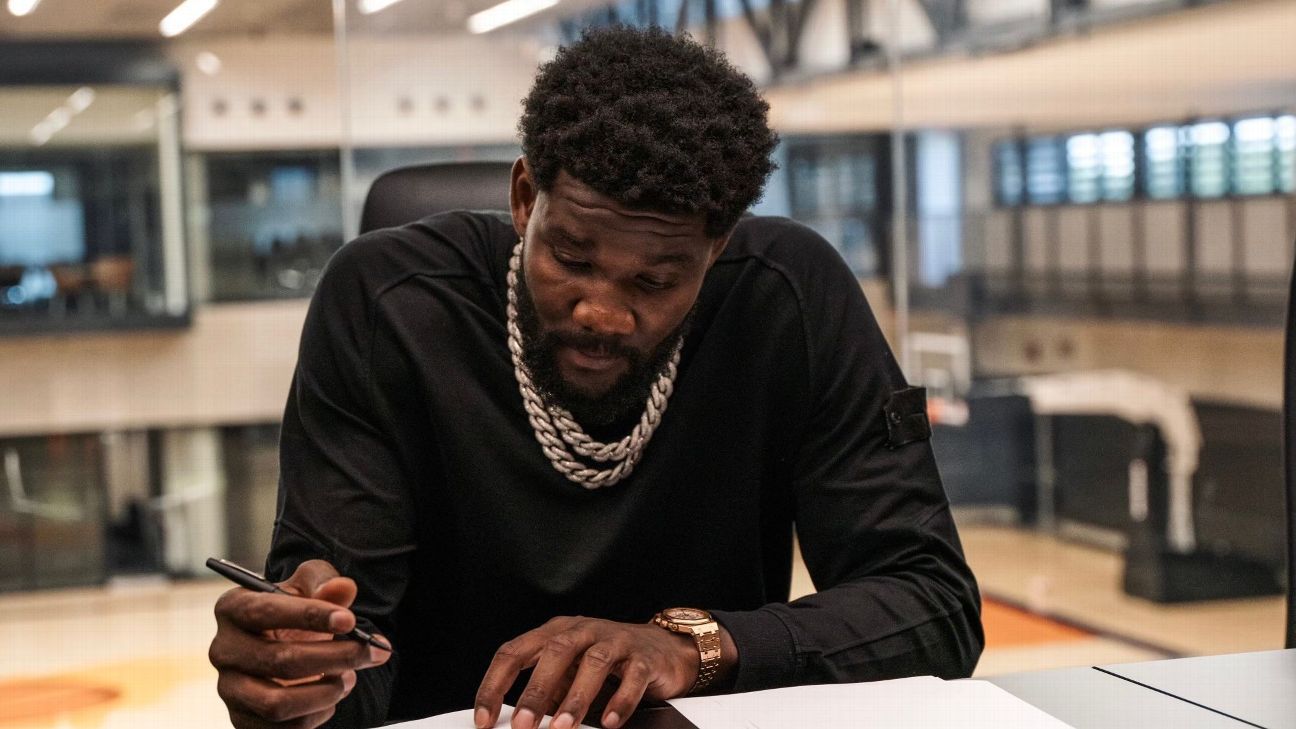 Deandre Ayton says he gained generational wealth that can help his family and many others after signing a four-year, $133 million maximum contract extension to return to the Phoenix Suns on Monday.

But there was also a business lesson involved, too, for the young center as the contract initially came via a matched offer sheet from the Indiana Pacers.

“This is a blessing,” Ayton told ESPN’s Andscape in a phone conversation after signing his contract. “This contract not only has generational impact for my family, but also with the way we are able to work in the Phoenix community and home in the Bahamas. That is the things that we go by…

“I’ve come to understand that this is a business. So, I was more anxious to know the end of the result so I could focus, move on, and just get back to work. I just treated everything like a business. Just keep being professional, approach everything with professionalism and not looking too deep into it.”

The Suns could have offered Ayton a five-year deal paying $179.6 million on July 1, but did not. Instead, the “anxious” restricted free agent signed the four-year, $133 million max offer sheet with the Pacers on July 12. The Suns had until 11:59 ET on July 14 to match the largest offer sheet in NBA history, but ended up matching it as soon as they received it.

Phoenix general manager James Jones said he told Ayton through the entire free agency process that he planned to re-sign him, including a Zoom conference call on July 1. James also told ESPN’s Andscape that it was “important” and “critical” to match immediately.

“We wanted Deandre here,” Jones said in a phone interview. “He’s vital to what we do, at the core of everything that we do. And throughout this whole process it was, it rang true. We wanted to keep him here, and the moment we can come to an agreement, we would. So, waiting 24 hours, 48 hours, that wasn’t something we needed to do because going into it, we knew this is where he wanted to be and where we wanted him to be.

“I’m one to just be direct. And if you’re convicted, if you know what you want to do, you do it. But if there’s any doubt from anyone that we wanted him, I think that the matching did that. It was urgent for us. It was important. It was critical for us. So, we just wanted to make sure that we handled our business quickly.”

Moreover, the Pacers showed their interest by clearing $4.7 million in cap space by making roster moves with four players to sign Ayton. But Phoenix showed no interest in a sign-and-trade deal with the Pacers, according to Wojnarowski. With this new contract, the Suns cannot trade Ayton until Jan. 15, and he also owns a no trade clause for a year.

Ayton credited his agents Bill Duffy and Nima Namakian and client service representative Bailey Williams for keeping him “on the main focus and taking care of my side of the bargain” and views his roller coaster free agency “all in the past.”

“The shift in free agency brought a lot of uncertainty through the whole process,” Ayton said. “I got to give a lot of respect to the Pacers organization. They were aggressive from the start and showing a lot of love. And we agreed to a max offer sheet. The Suns matched. Now, I’m back in Phoenix as a Sun.

“I’m happy. The process is over. I put all this behind me and focus on chasing a championship this upcoming season with my brothers.”

Jones noted “negotiation” as the reason why the Suns didn’t offer a maximum contract to Ayton. Phoenix saved roughly $43 million and an extra year of contract with the matched offer sheet.

“I’m not going to go into the inner details. I just look forward. We had some really robust and good conversations. It ultimately led to him getting a max offer sheet that we matched,” Jones said.

Ayton was the No. 1 pick of the renowned 2018 NBA draft that also included Luka Doncic (third), Jaren Jackson Jr. (fourth), Trae Young (fifth) and Shai Gilgeous-Alexander (11th). Ayton has averaged 16.3 points and 10.5 rebounds with Phoenix through the first four seasons of his career. The 6-foot-11, 250-pounder played a key role in the Suns advancing to the 2021 NBA finals.

Jones said he was elated for Ayton, his family, and the Suns to have him back. Jones and Suns owner Robert Sarver were on hand when Ayton signed his contract from the franchise’s practice facility in Scottsdale, Ariz.

“I just told him, I’m happy for him,” Jones said. “I’m proud of him for how he handled it and how he approached it. I’m just excited for what his next steps look like. He’s motivated to continue to improve, and we’re motivated to help him reach that level.

Suns head coach Monty Williams added he was ecstatic Ayton was back as his starting center, and he knew all along “we were going to match any offer.”

“James and myself, we talk a lot and he’ll let me know what’s going on with the contract and ask for my opinion,” Williams said to ESPN’s Andscape. “I try to stay out of persuading him when it comes to him making decisions. But we knew any offer that he got, we were going to match.

“… I’m happy for Deandre just because I know this is what he wanted. He wants to be in that class of players that’s regarded in this way. So, from that standpoint, I think as a competitor, that’s what you want. When you see a guy working for that, that part is pretty cool.”

The Suns won an NBA-best 64 regular-season games last season, earned the Western Conference’s top playoff seed, and had expectations of returning to the NBA finals. Phoenix, however, struggled at the end of the regular-season and in the postseason before being eliminated in the second-round, a blowout Game 7 loss at home to the Dallas Mavericks.

Ayton was benched for most of the second half by Williams after they engaged in a verbal spat on the bench. Looking back, Williams described that Game 7 loss as a “bad day.”

“I didn’t feel like I had to say anything. I was just doing my job,” said Williams said. “We had a bad day, but we had an unbelievable season. Unfortunately, in sports and even in society, we focus on the one bad thing. It hurt like crazy, and it still hurts. It was embarrassing to play that way, but as the dust settles and I look at the season from a holistic perspective, I look at all the good stuff that happened.

“This team is a new standard in Suns basketball and it’s part of a process. The one thing I understand is when I first got there, the team wasn’t winning many games and so nobody was talking about anything that was going on. And there was stuff going on because it’s a team and you’re dealing with people. Now that you’re winning and having some success, things are talked about, and that’s a good thing in my opinion. You may not like what everybody talking about, but nonetheless, we’re a team that has expectations and so it just goes with the territory.”

These are Ayton’s first comments since that Game 7 he described as “in the past.” He also said he and Williams are on good terms and their relationship as “calm.”

“Game 7 was an anomaly. We let that get away from us as a team. That is all in the past. We’re going to look forward. We are going to move on,” Ayton said without going into detail.

The core of the Suns includes Ayton, NBA All-Stars Chris Paul and Devin Booker as well as Mikal Bridges, who made the All-Defensive team last season. All are currently under contract through at least the 2024-25 NBA season. Williams said the lack of contractual issues will take away from distractions from the team.

“When you’re a coach or a player in this league, you do it because you love it, but you also do it because you get paid a lot of money,” Williams said. “People always want to say it’s not about the money. That’s a lie. It is about the money. I’m a coach. I’m a head coach in this league. I bet that I could go find a high school job in every state in the country and probably have a lot more fun and less stress. But all of us are in this position, one, we love the NBA, we love the league, we love the game, but we get paid a lot of money and you have a short window to do it.

“So, I just kind of laugh at all these people that say, ‘Oh, it’s not about the money.’ I’m like, ‘Yeah, it is.’ Once you identify that, then you can kind of move on past it because if you keep whining about it, it’s just a distraction and people know it’s about the money. And so, I think, yeah, it is less of a distraction.”

Ayton plans to celebrate his new contract and his 24th birthday on Saturday with his family back home in Nassau. He said he spent a month and a half “focusing on himself” at P3 Applied Sports Science in Santa Barbara shortly after last season to prepare for the 2022-23 campaign.

Ayton will also be back in Arizona where has been since 2015 after playing for Phoenix Hillcrest Academy and the University of Arizona.

“I want to keep doing what I’m doing being the face of my family and sharing,” Ayton said. “We notice the things going around us in the community and we are willing to help in any way we can possible. That is one of the things my mom kept me on and that’s what I stand by.”