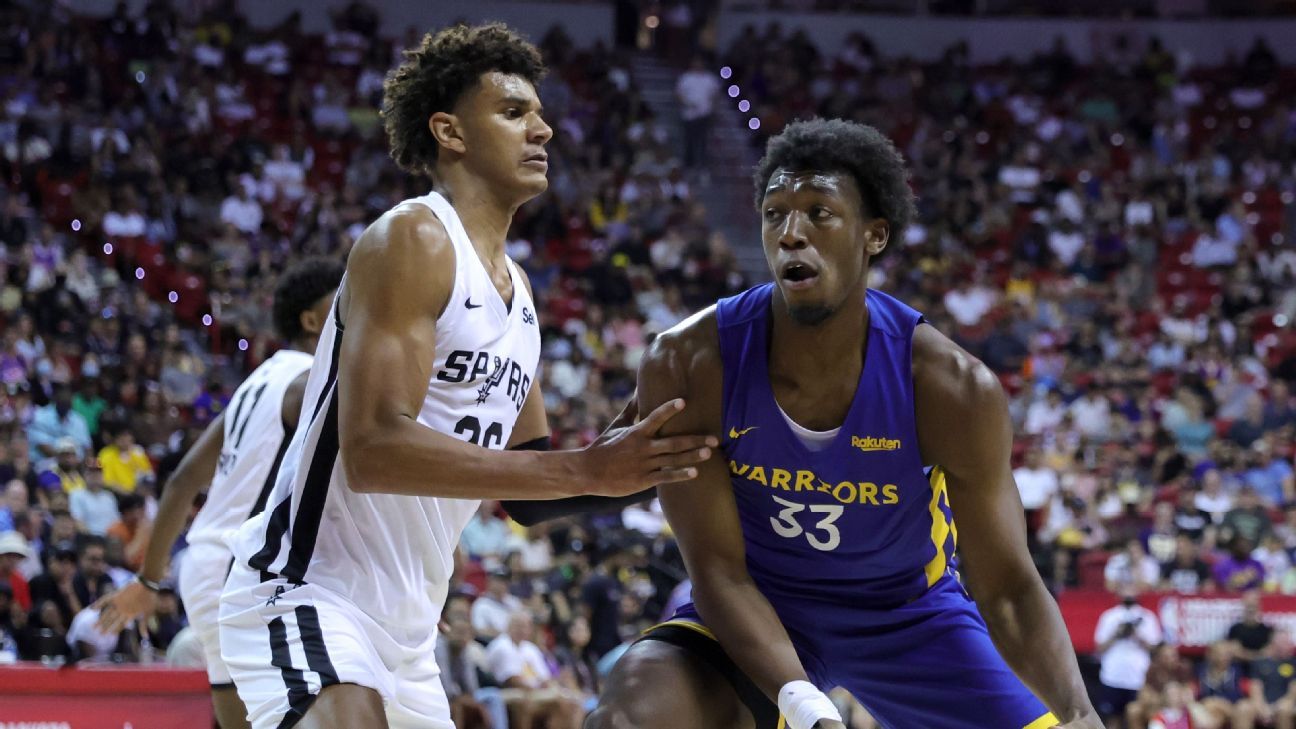 The first weekend of Las Vegas Summer League is in the books, and the NBA hasn’t disappointed. Paolo Banchero and Jabari Smith Jr. kicked things off with a highly anticipated meeting between the lottery draft picks.

No. 2 overall pick Chet Holmgren carried his momentum from Utah into Saturday’s 90-88 Oklahoma City Thunder loss to the Houston Rockets, while several other rookies have delivered big performances. But the newbies aren’t the only ones who stole the show.

Golden State Warriors center James Wiseman made his return from a torn meniscus in his right knee that has sidelined him since April 2021.

Los Angeles Lakers forward LeBron James didn’t need to be on the court to leave an impression, as he took in his team’s matchup with the Phoenix Suns courtside, while new coach Darvin Ham addressed the team’s future.

Brooklyn Nets guards Kyrie Irving and Ben Simmons also watched the action from Vegas as the NBA world waits for the Nets to decide on their future.

What are players, coaches and front-office personnel buzzing about in the desert? Here’s what our NBA insiders are discussing.

MORE: Rookies who have stood out in Vegas

What’s next for Wiseman and the Warriors?

Wiseman made his summer league debut Sunday — a highly anticipated and important moment for the Warriors’ offseason.

In his first game since March — when he spent time in the G League — Wiseman finished with 11 points on 5-of-7 shooting, two rebounds and two blocks in 19 minutes.

As Wiseman made his way into the locker room after the game, he was greeted by a standing ovation from his teammates.

“I’ve been through a lot of hard times. To see everyone rooting for me, it’s a great feeling,” Wiseman said.

There were a lot of questions surrounding Wiseman’s availability and why he didn’t play in the California Classic, or the first game in Las Vegas.

According to Warriors summer league head coach Jama Mahlalela, the decision for Wiseman to play Sunday — the Warriors’ second summer league game — instead of their first was based on the time table the training staff planned.

Trainers wanted Wiseman to log a certain amount of time in the gym before being exposed to the public, Mahlalela told ESPN. And that predetermined the date he’d be allowed to play.

The Warriors also wanted to make sure Wiseman was as confident as possible before he took to the court, a source said.

Now that Wiseman has a game under his belt, the Warriors can start to plan out how they want to use him next season alongside Kevon Looney.

“There’s no doubt you see his dominance already,” Mahlalela told ESPN. “He’s a screen setter and a roller, and the Warriors haven’t had a dynamic roller for many years. I think that’s an opportunity for us to change our game a little.”

“Defensively, it is about rim protection. And he’s a huge human being,” Mahlalela said. “The more we can get him to be a great off-ball, weakside defender and be able to alter or change or rim protect, it’s a simple package for him.”

The Warriors hope by the start of August they will have an even clearer idea of how they want to use Wiseman.

Unlike his rookie season, when the Warriors threw the center into more playing time, they won’t give him free rein to start out. They are emphasizing the need for him to master the fundamentals first.

But simply having him play a game in Las Vegas is a step in that direction. And it helped both Wiseman and the Warriors get the weight of his return off their shoulders.

What happens in Brooklyn …

The drama that surrounds the Nets never really stops.

The latest chapter in the soap opera came over the weekend as both Simmons and Irving made appearances inside the Thomas & Mack Center at summer league. The fact that Simmons — who hasn’t played in over a year as he recovers from back surgery and mental health concerns — watched the Nets play Friday and Sunday, while Irving, who recently picked up a player option worth over $36 million but is the subject of trade speculation, watched a game between the Detroit Pistons and the Washington Wizards on Saturday night only heightened the organization intrigue.

The fact both players did this as a gym full of fans and league executives tried to figure out where Brooklyn’s star Kevin Durant will play next season made the past few days even stranger.

Stay up to date on the latest NBA free agency and trade news all summer long:

In the short term, none of the main characters in the Nets’ ongoing saga want to discuss things publicly. Simmons declined comment Sunday but appeared to be in good spirits while joking with reporters. The same goes for Nets general manager Sean Marks, who maintains a friendly demeanor while being repeatedly asked about Durant’s future.

For their part, the Nets’ young summer league team is trying to take it all in stride. Second-year guard Cam Thomas said he remains in contact with Irving, and no matter what might happen in the future, “that will still be my guy, my brother.”

Thomas isn’t concerned about whether Irving shows up to watch the summer Nets play in Vegas.

“That’s on him, but I don’t really care,” Thomas said. “He can come watch, he don’t have to, I’m going to still do my thing. I’m still going to play. It doesn’t matter who’s watching. That’s his choice.”

Nets guard David Duke Jr. said he appreciated Simmons being in Vegas to watch the young Nets, but he isn’t paying attention to all the storylines surrounding his team. He has made sure that people in his inner circle aren’t asking him questions about it all either.

“All the people that have my number are my close friends, my family,” Duke said. “They don’t really care about that stuff, so they let me do my thing and that’s all that really matters to be honest.”

The only thing that most in the gym agreed upon over the weekend in regard to the Nets’ predicament is they don’t think a potential Durant deal will happen any time soon. But as has been the case all year in Brooklyn, it’s always best to expect the unexpected. The Nets remain on top of a news cycle that shows no signs of ending soon.

Brian Windhorst explains why the Nets’ expectations for a Kevin Durant trade have slowed down the trade process.

A year ago at summer league, New Orleans Pelicans guard Jose Alvarado was on a two-way contract and didn’t even start for the team in any of its five summer league games — playing the ninth-most minutes on the team.

Slowly but surely, however, Alvarado carved out his place on the NBA scene. He fought for minutes and took advantage of absences during the year to cement himself in the Pelicans’ rotation, and by the playoffs he was going toe to toe with one of the greatest point guards of all time in Chris Paul while earning himself a full NBA contract.

Alvarado carried that momentum into the offseason when he joined the Puerto Rican national team during the most recent FIBA qualifying round, which included an eight-point loss to the United States and a 10-point victory over Mexico. Alvarado was Puerto Rico’s leading scorer in both games.

The fan favorite said he found it jarring to be walking around with former NBA player and Puerto Rican native Carlos Arroyo or former NBA point guard Mike Bibby, and people would want to take pictures with just him.

Choose your league size, customize the scoring and set the rules you want to follow in order to create the fantasy basketball league you want to play in.

Create your custom league for free!

Because of the national team experience, Alvarado, who is listed on the Pelicans’ 2022 summer league roster, took the first night off and enjoyed watching from the sidelines with his New Orleans teammates.

“I just want to keep building for myself,” Alvarado said. “This is my little legacy. I can tell my kids I did it my way. I didn’t have to pretend and be nobody else. I just did it Jose way. This whole summer has been great.”

Alvarado’s presence has also been felt in AAU gyms across the country as everyone tries to pull off his patented sneaky steal in which he hides on the baseline after a made basket or change of possession and sprints down an unsuspecting defender as they are bringing the ball up the court.

Coaches from all over have talked about how they’ve seen kids trying to pull it off, and it’s something Alvarado gets a kick out of.

“Everybody is telling me you got everybody doing that,” Alvarado said. “It’s cool, man. It never gets old to me. Even coming here and sitting with all these guys that have been in the league and them coming up to me and showing love, it’ll never get old to me. For the AAU prospects, just keep doing it. Make me look good. Hopefully they doing it the right way.”

By the way, what’s the steal called?

“I gotta figure that one out,” he said. “I gotta think about that one.”

The leader in the clubhouse: Grand Theft Alvarado.