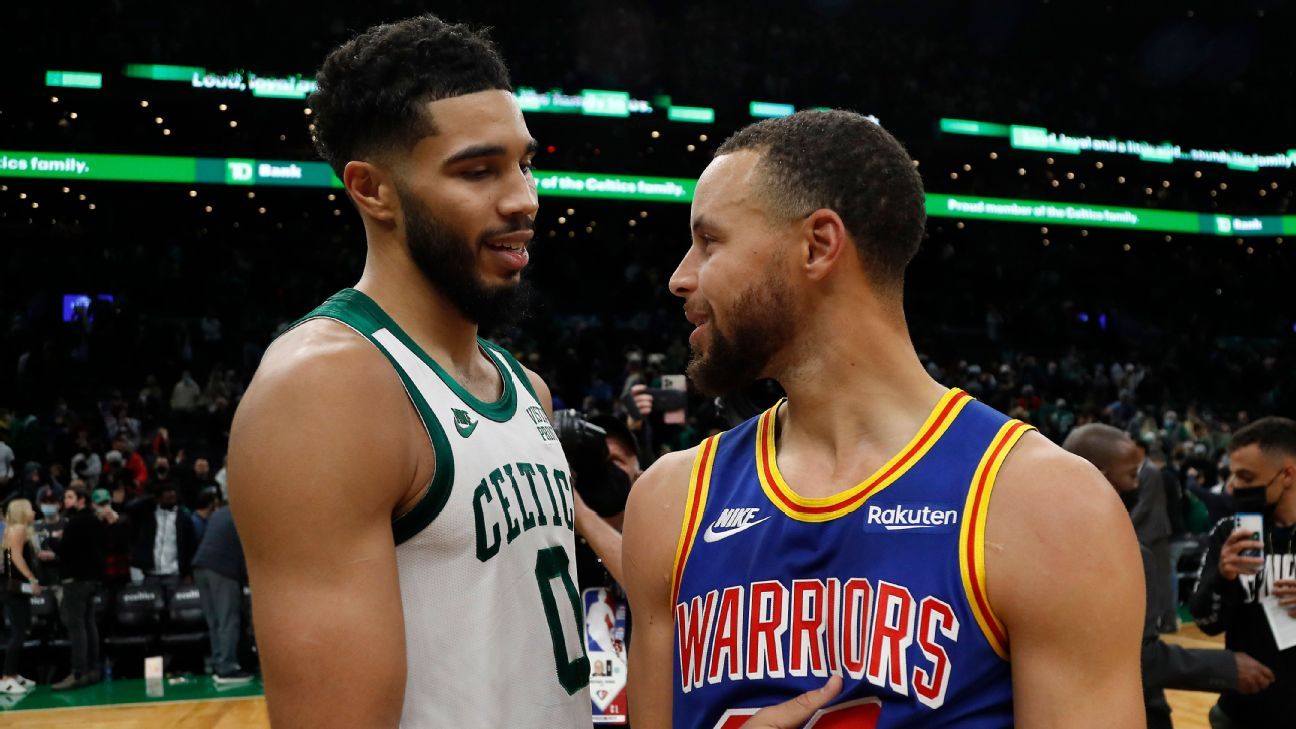 After three rounds of upsets, thrillers, blowouts and everything in between, the NBA Finals are here — and it’s a series that will pin some familiar faces against a group with zero experience on the league’s biggest stage.

The Golden State Warriors, led by three-time champions Stephen Curry, Draymond Green and Klay Thompson, are making their sixth Finals appearance in the past eight seasons. The Boston Celtics, meanwhile, are here for the first time since 2010.

Despite the offensive strengths of each team, this series will be a defensive clinic on both sides. This is the first Finals to feature the top two teams in defensive efficiency since 1996, when the Chicago Bulls defeated the Seattle SuperSonics.

Can Jayson Tatum continue knocking off future Hall of Famers in the playoffs? Will Curry finally grab that elusive NBA Finals MVP award? What are the biggest X factors for each team?

Our NBA insiders are breaking down the keys to what should be an exhilarating series.

How they got here:

For the first time since 2019 and the sixth time in the past eight seasons, the Warriors are back in the NBA Finals.

But unlike their dynastic run that spanned from 2014 to 2019, this trip to the Finals wasn’t a given. Just two years ago, the Warriors had the worst record in the NBA. Last year, they missed the playoffs after losing both play-in games.

Klay Thompson missed the first half of this season as he recovered from consecutive ACL and Achilles tendon injuries; he made his debut in January after a 941-day layoff. But on the day he returned, Draymond Green went down with a back injury. Green returned two months later, but just one game afterward, Stephen Curry strained a foot and missed the last month of the regular season.

The emergence of Jordan Poole, Andrew Wiggins and Kevon Looney allowed the Warriors to remain in the top three in the Western Conference. In the playoffs, they were key contributors in getting the Warriors back to the NBA’s grandest stage.

The Warriors have barely played with a fully healthy roster. Andre Iguodala has missed the entirety of the postseason so far. Otto Porter Jr. missed three games. Gary Payton II has been out since early in the second round. But those players will be reintegrated into team practice this week, and each could be an important addition to the Warriors’ title hopes.

He emerged this season as a lockdown defender. Early on, he found himself rotational minutes by defending opponents’ best players, whether it was a wing player or a big; he even tallied several blocks on the Denver Nuggets‘ Nikola Jokic in the regular season and playoffs. The way Payton has improved his offense has garnered him more minutes from Steve Kerr.

Payton’s performance earned him a starting spot in the Western Conference semifinals before his elbow was fractured on a controversial play with the Memphis Grizzlies‘ Dillon Brooks.

Payton’s defense will be crucial for the Warriors in the Finals. While Golden State is known for its offense, the Warriors continuously preach how their defense kick-starts their scoring. Payton’s presence inside the paint also gives the Warriors more options when looking to go small.

Before his injury, Payton was averaging 6.1 points on 72.7% field goal shooting, 3.0 rebounds and 1.3 assists in 15.9 minutes per game during the playoffs.

Heading into the conference finals, Kerr joked that he wasn’t bringing up turnovers to his team because it has been its issue for the past eight years. He doesn’t have to tell his players anymore that they need to keep those down.

Once again, turnovers have been the Achilles’ heel for the Warriors this postseason. Golden State is averaging 14.8 turnovers per game in the playoffs (fifth worst of the 16 postseason teams) for 15.9 points. That doesn’t sound too bad at face value, but when you break down the Warriors’ wins and losses so far, it’s far more telling.

In the Warriors’ four losses in the playoffs, they are averaging 16.3 turnovers for 20.8 points — the third-most turnovers for the fifth-most points allowed in the postseason. In wins, they cut that number to 14.2 turnovers for 14.3 points (top 10 in both categories).

The Warriors know that with their style of play — fast-paced with lots of ball movement — turnovers are bound to happen. The ones they are focused on cutting down are the ones that come off sloppy or lazy passes.

If the Warriors cut down on their turnovers, they will be far more difficult to beat. And if they are beaten, it won’t be because they gave the ball to their opponent.

How they got here:

In perhaps the most highly anticipated first-round matchup, the second-seeded Celtics faced the seventh-seeded Brooklyn Nets. Potentially, the series had the opportunity to go seven games, with Boston’s dynamic duo of Jaylen Brown and Jayson Tatum going against Kevin Durant and Kyrie Irving. Instead, Boston made quick work of the Nets in a sweep.

The Boston Celtics and Golden State Warriors are set to meet with the NBA championship on the line. You can catch all the action on ABC and the ESPN app.

Against the top-seeded Miami Heat, the Celtics fell behind 2-1, but surged back to take a 3-2 lead into Game 6. Miami defeated the Celtics behind an epic performance by Jimmy Butler to send it to a Game 7 on South Beach.

There, the Celtics delivered the final blow, advancing to their 22nd NBA Finals in franchise history in search of their NBA-record 18th title.

The biggest key for the Celtics heading into the NBA Finals might be their three days off between Game 7 against the Heat and Game 1 of the Finals.

Boston has endured grueling back-to-back series against the Bucks and Heat, playing every other day since May 7, after getting three days off following Game 2 against Milwaukee.

Marcus Smart has dealt with a quad injury and a sprained ankle in the playoffs. Robert Williams III missed time in April with right meniscus surgery and has experienced knee soreness thanks to a bone bruise suffered after a collision with Giannis Antetokounmpo in Game 3 vs. the Bucks.

Tatum has averaged over 41 minutes per game over the past two series. Brown and Al Horford are both over 38 per game. All three logged at least 44 minutes in Game 7 against the Heat.

Simply put, the Celtics could use a few days off.

Golden State, meanwhile, hasn’t had to play in a Game 7 this postseason and dispatched the Dallas Mavericks in five games. The Warriors will end up with a week off between games once the Finals start Thursday night.

Biggest weakness: Are the lights too bright?

Boston’s collective postseason inexperience revealed itself down the stretch in multiple games over the past two rounds.

After going 4-0 in games that included clutch time (defined by the NBA as a span in the final five minutes or overtime in which the lead is within five points) against the Brooklyn Nets, Boston went 2-4 in such games against the Bucks and Heat. One of those games was Sunday’s Game 7, in which a missed Jimmy Butler 3-pointer could have resulted in a historic collapse.

The Celtics have thrived this postseason when they are able to jump out to big leads and smother opponents with their league-leading defense.

This Celtics roster enters the Finals with zero games of Finals experience, while Golden State has 123. According to ESPN Stats & Information research, this is just the third Finals in NBA history in which one team has had 100-plus games of experience while the other team had zero, and the first time since 1997 (Bulls 134, Utah Jazz 0).

Still, inexperience didn’t stop Boston from turning an under-.500 midseason record into a Finals berth, becoming the first team to do it since the 1980-81 Rockets, per ESPN Stats and Information. It didn’t deter the Celtics from romping through the first round or battling back against the Bucks or winning a road Game 7 in the Eastern Conference finals.

But these are the Warriors, who are very much looking like the Warriors. If the Celtics want title No. 18, they’ll have to make sure their lack of Finals experience doesn’t become a factor on the biggest stage.

Golden State managed to reach the NBA Finals without facing a team that likes to switch on defense. None of the Warriors’ three West opponents (Denver, Memphis or Dallas) were in the top half of the league in frequency of switching on-ball screens during the regular season, per Second Spectrum tracking. And while the Mavericks, in particular, started switching more over the course of their series against the Warriors, Golden State still ranks ninth among the 16 playoff teams in how often opponents have switched against them (31.5% of the time) during the playoffs, according to Second Spectrum.

That’s about to change in a big way. No other team switched more frequently than the Celtics during the regular season, and they rank second in frequency (44%) so far during the playoffs.

In theory, switching most screens can take the Warriors out of the free-flowing offense they prefer to play. Think of how the Houston Rockets grounded Golden State’s offense down at times in the 2018 conference finals, holding them below 95 points in back-to-back wins in Games 4 and 5. The Warriors had a combined 32 assists in those games, a slight uptick over what they averaged per game the previous round against the New Orleans Pelicans (30.8).

Unlike back in 2018, Golden State no longer has a singular isolation player like Kevin Durant to hunt mismatches against a switch-heavy defense. However, the Warriors have also faced switches often enough in the postseason to have developed a robust menu of options against them, starting with Curry’s ability to move without the ball and Green’s skill picking apart defensive mistakes.

Those traits were on full display during Golden State’s closeout win over Dallas, which switched 63% of the Warriors’ on-ball screens in Game 5 per Second Spectrum — the most of any Warriors playoff game. That didn’t prevent them from handing out 36 assists, the second most in a game during these playoffs. Curry and Green had nine apiece.

At the same time, Golden State accomplished that against a team that rarely switched over the course of the regular season and playoffs. Now, the Warriors will face a well-drilled switching attack that does so from a position of strength rather than weakness. How well they handle switches will go a long way toward determining the outcome of the Finals.