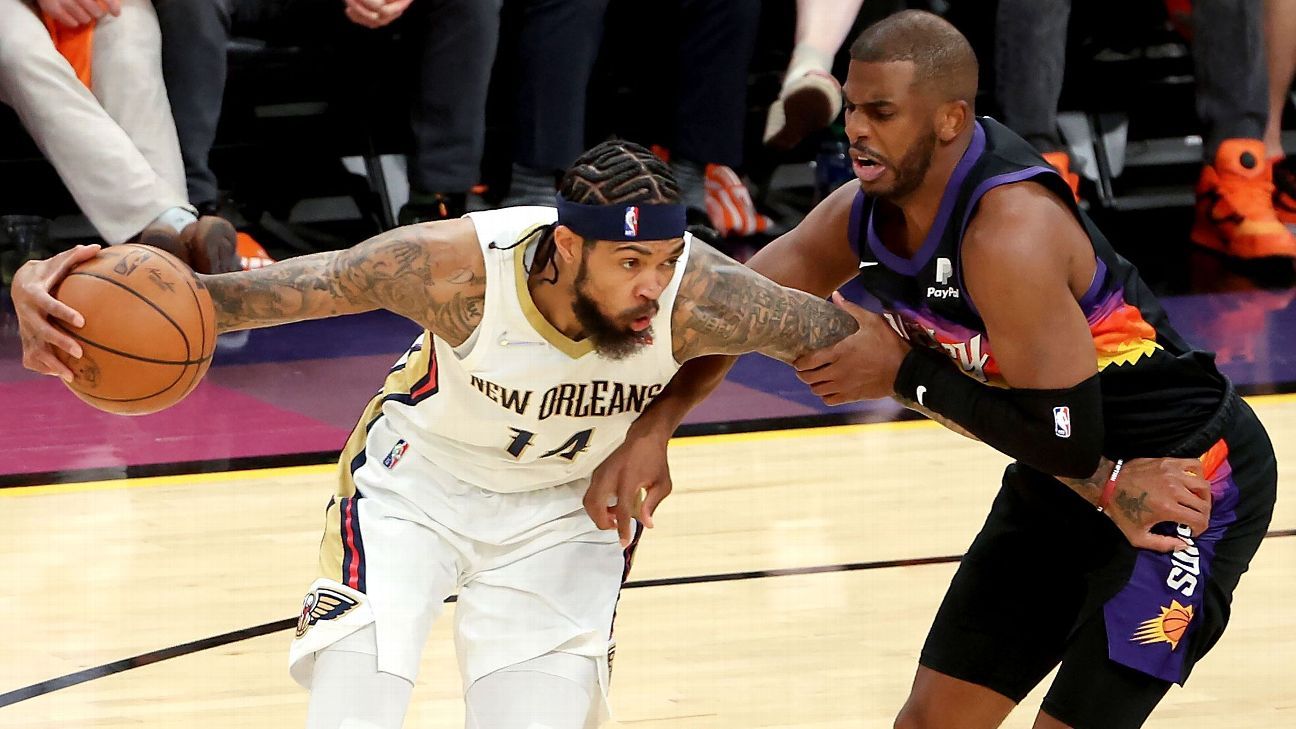 PHOENIX — Before every game when his team is doing pregame handshakes, New Orleans Pelicans forward Larry Nance Jr. has a message for Brandon Ingram.

“You’re the best player on the floor,” Nance tells him.

Nance and Ingram were teammates on the Los Angeles Lakers for the 2016-17 season and half of the following year before Nance was dealt to the Cleveland Cavaliers. So Nance has watched Ingram grow over the years from afar, and when he got to New Orleans, he knew what his eyes had been telling him was true.

Ingram showed out on Tuesday night as the Pelicans knotted up their first-round series against the Phoenix Suns with a 125-114 victory.

New Orleans did catch a break when Devin Booker, who had 31 points in the first half, left the game because of a right hamstring injury with 4:46 left in the third quarter. He injured himself chasing down Jaxson Hayes on a fast-break dunk that pushed the Pelicans’ lead to three points and drew a timeout from Suns coach Monty Williams.

Ingram finished with 37 points, 11 rebounds and nine assists on 13-of-21 shooting while hitting all three of his 3s and all eight of his free throws.

“B.I. is him. He’s that guy,” Nance said. “I watch guys like B.I. and [CJ McCollum] and sometimes it’s like they’re playing a different sport. They’re that impressive. To them, that’s normal. Sometimes, the support characters need to uplift those guys and let them know, ‘Hey, you’re really that guy. I believe in you.’

“I just want to make sure he knows this whole team is rocking with him. Missed shot, made shot, turnover, good pass, bad pass. I don’t care. I’m rocking with him. Hopefully, that boosts his confidence. I want that sky high.”

Ingram says hearing that from Nance every game does boost his confidence and puts him in a different mindset knowing how much his teammates are depending on him.

On Tuesday, he was in such a groove in the second half, Pelicans coach Willie Green stopped calling plays on his own and let Ingram run the show.

“This was one of his best [games], and it was on the big stage,” Green said. “I’m proud of that young man. He works his tail off.”

This was just Ingram’s second playoff game after he missed the playoffs in his first five seasons — three with the Lakers and two with New Orleans.

The Pelicans had to withstand a big punch from Phoenix in the first half when Booker seemed unstoppable. Booker was 12-of-18 and hit seven 3-pointers.

Just before the halftime buzzer, Booker hit one from the logo to send the Suns into halftime with a 61-56 lead.

But in the third quarter, the Pelicans picked up their tempo and denied Booker on his only shot attempt in the frame before he checked out for good.

With Booker out, the Pelicans still had to contend with Chris Paul, who had 19 fourth-quarter points to help seal Game 1. This time, Paul finished 5-of-16 from the field.

“He started to get it going a little bit late in the fourth quarter, but thank God we were able to contest some shots and get him inside the 3-point line,” Green said. “That’s what it’s going to come down to. At the end of the games, we have to execute on both ends of the floor, and we did that.”

New Orleans tried switching as much as possible — except when center Jonas Valanciunas was in the game — and throwing multiple looks at the Suns, but McCollum said sometimes it comes down to just making and missing shots.

“We tried to show different stuff, but [Paul has] seen it all, man. He knows what he’s doing, how to manipulate defenses. He knows how to get to his spots,” McCollum said. “I thought the difference was he just didn’t make them tonight. He hit some big shots in the fourth quarter last game. He hit a couple 3s that kind of kept them afloat. But credit to our staff for doing a good job, credit our personnel for doing a good job. But also, you need luck in this game. It’s a make-or-miss league. Sometimes you do, sometimes you don’t. Tonight, we made them and they didn’t.”

Phoenix took a 98-97 lead with 7:47 to go, but New Orleans responded with an 8-1 run capped off by Jose Alvarado‘s 3-pointer off an assist from Ingram with 5:19 to play to help give New Orleans some cushion down the stretch.

“Everything was flowing. Everybody was effective on the floor,” Ingram said. “All five made something happen offensively or defensively. Jose came in and did a good job knocking down big shots. [Trey Murphy III] came in and did a good job on the defensive end. We just really, really connected today. Where we are, we can run off seven, we can get three stops in a row. That’s just us continuing to get better.”