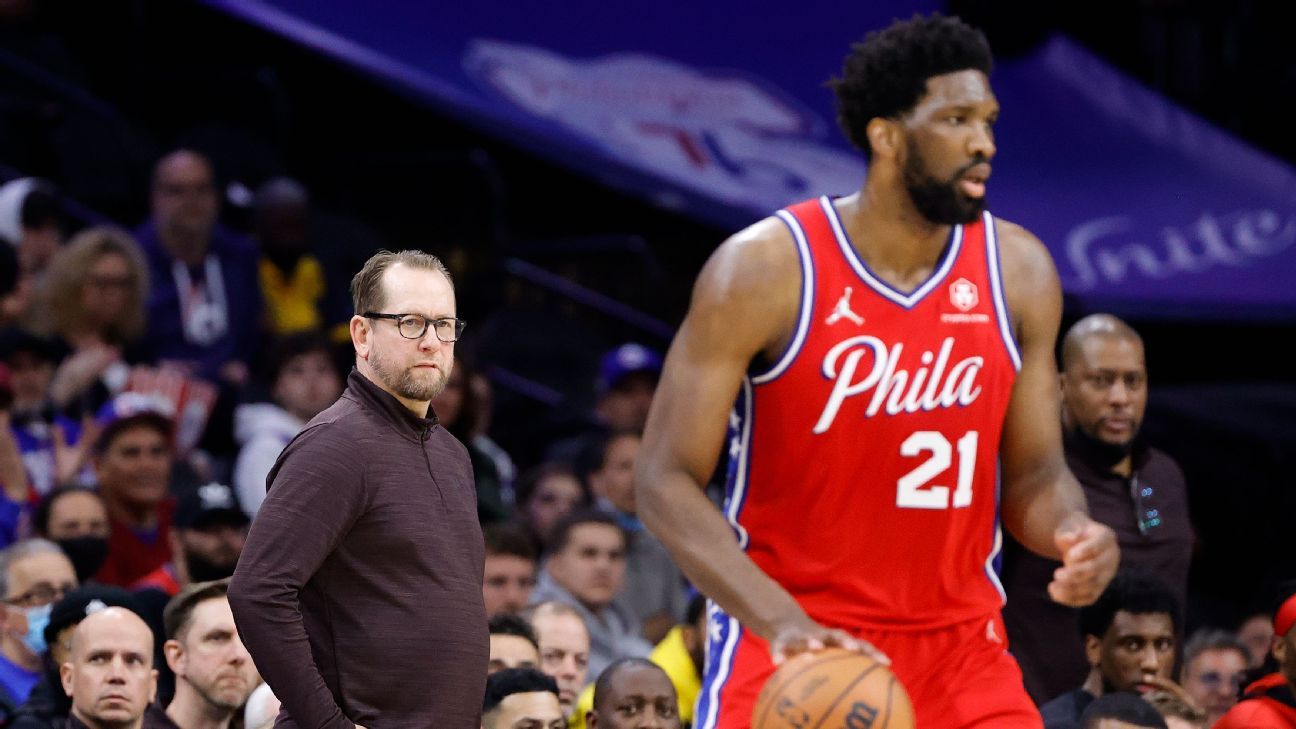 So, after Embiid finished with 31 points, 11 rebounds and went 12-for-14 from the free throw line — taking more free throws than Toronto’s entire team — in helping the 76ers take a 2-0 series lead on Monday night, the All-Star big man had a brief conversation with Nurse on the sideline in front of Toronto’s bench in the final seconds of Philadelphia’s 112-97 victory.

What was Embiid’s message?

“He’s a great coach,” Embiid said. “Obviously, he’s been able to accomplish [a lot] and always been a big fan.

“But, I told him, respectfully, I told him to stop b—-ing about calls.”

Embiid had 19 of those 31 points — and 12 of those free throw attempts — in the first quarter, when he came out with a clear and obvious intent to impose his will on the game.

Embiid got tangled up with Raptors forward OG Anunoby in the opening minutes, which caused both men to get technical fouls. And then, after Toronto jumped out to a quick 11-2 lead, the big man’s repeated forays into the paint put several Raptors into early foul trouble and saw Embiid wear out a path to the foul line.

For his part, Nurse disagreed. After saying following Game 1 that Embiid hit his players with three or four elbows to the face — and should’ve been called for several other fouls — Nurse said there was some slight improvement on Tuesday, but not enough.

“At least there wasn’t as many elbows thrown to the face tonight that we had to endure,” Nurse said, tongue firmly planted in his cheek after expressing his frustration with what he thought was a clear charge call that was called a block on the floor and then was not overturned when he challenged it.

As for his conversation with Embiid — one Nurse was asked about during his postgame availability, prior to Embiid’s subsequent response — he said there wasn’t much to it.

“He was saying to me that, ‘I’m going to keep making all the free throws if you keep fouling,'” Nurse said. “And I said, ‘Well, you might have to.’

The competition, so far, is pretty one-sided. Toronto was without standout rookie Scottie Barnes after he sprained his left ankle in Game 1, while Thaddeus Young played 8 ineffective minutes with a sprained left thumb.

Gary Trent Jr., meanwhile, played a pretty hopeless 10 minutes after spending the past two days away from the team with a non-COVID illness, missing all three shots he took and committing four fouls. Nurse admitted after the game Trent probably shouldn’t even have played, though he credited him for giving it a go.

All of it, though, started with Embiid, who roared on several occasions in the first quarter as he and Fred VanVleet, who scored 15 of his 20 points in the first, traded baskets throughout the quarter — one Toronto ultimately wound up finishing ahead by one, 33-32.

And while Philadelphia would pull ahead for good early in the second when it outscored the Raptors by 12 points with Embiid on the bench, it was his physical play in the first quarter that set the tone for his teammates to follow.

“He let it be known that we’re not going to take the bullying,” 76ers forward Danny Green said.

Embiid also picked up a couple of injuries throughout the game, hurting his left foot late in the first half and his right (shooting) elbow in the third quarter. He played through both injuries, however, and downplayed the significance of either impacting his availability for Game 3 on Wednesday in Toronto.

In fact, Embiid already was looking forward to the challenge of going up 3-0 on this Raptors team, and said he expects there could be less fouls called in Game 3 — and that he’ll be ready to play even more aggressively, if he needs to, in order to make sure he keeps going to the line.

“Referees and the league, they’re the same way,” Embiid said. “They’re gonna come in the next game, and they are gonna let stuff go. So, you know, they’re not going to call, you know, some fouls. So, in that case, you got to be more aggressive. You got to go to the rim with more power. You got to jump over people, you got to try to finish through contact. Because that’s an adjustment when it’s the refs coming in and [the Raptors are] complaining.

“I’ve been doing this for quite a while to know that’s usually the adjustment. [And] in that case, that’s where I’d become more physical.”

LeBron’s future, overrated players and top-10 tweaks: NBArank in review
5 important quotes from Ben Simmons podcast with J.J. Redick
How much does NBA League Pass cost for the 2022-23 season?
The Whiteboard: Ayo Dosunmu and second-year breakouts to watch for
Ben Simmons reveals whether or not he’ll attempt 3s for Brooklyn Nets this season