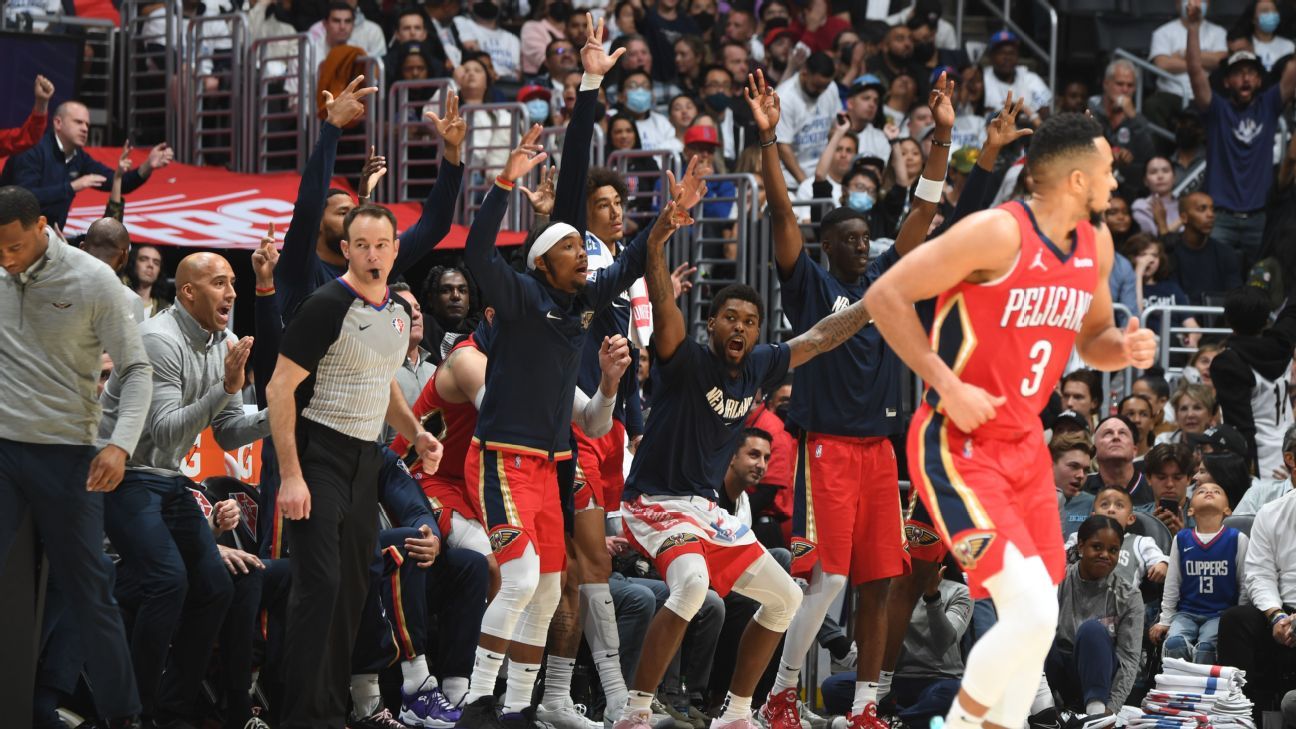 For the New Orleans Pelicans, all seemed lost in the third quarter Friday night in Los Angeles.

The team that started the season 1-12 and was 14-32 at its lowest point had fought its way back to 36-46 and grabbed the No. 9 seed in the Western Conference play-in tournament.

Things were going the Pelicans’ way in the first half Friday as they built a 16-point lead. But then that lead quickly disappeared. They watched as the LA Clippers — playing without star Paul George due to COVID-19 — quickly racked up a 13-point lead and Crypto.com Arena was preparing for a first-round playoff series.

But Pelicans coach Willie Green settled down his group, leaned on his two stars and a handful of rookies and watched as his Pelicans fought back to shock the Clippers and come away with a 105-101 win.

Jonas Valanciunas slammed home a dunk as the Clippers were trying to foul with 12.6 seconds to go to seal the deal. The Clippers missed two 3-pointers after that to set off the Pelicans’ celebration.

New Orleans advances from the play-in tournament as the No. 8 seed and now will face the top-seeded Phoenix Suns in a series that begins Sunday.

The Pelicans held a 56-41 lead with less than a minute left in the second quarter. The Clippers answered with a 34-6 run that led into the next frame as they took a 75-62 lead with 4:01 left in the third quarter.

Los Angeles took a 10-point lead into the final quarter, but the Pelicans punched back. The Clippers scored the first three points in the fourth, and that’s when New Orleans woke up. A 14-1 run tied the game at 88, and the teams traded buckets to tie at 94, as well. That’s when New Orleans scored seven in a row — a Larry Nance Jr. putback dunk, a CJ McCollum mid-range jumper and a 3-pointer by Trey Murphy — to take control.

The third quarter went about as badly as it could have gone for New Orleans, which was outscored 38-18. It shot 6-of-22 from the field, 1-of-7 from deep and 5-of-12 from the free-throw line. McCollum, Herb Jones and Brandon Ingram were all minus-20 in the frame.

Clippers coach Ty Lue went small in the second half subbing in Robert Covington for Ivica Zubac, and it paid dividends right away. Green tried different lineups to give his team a jolt, even turning to Tony Snell, who hadn’t played meaningful minutes for the Pelicans in a month.

When that didn’t work, he went back to Murphy, who rewarded his coach’s faith in him.