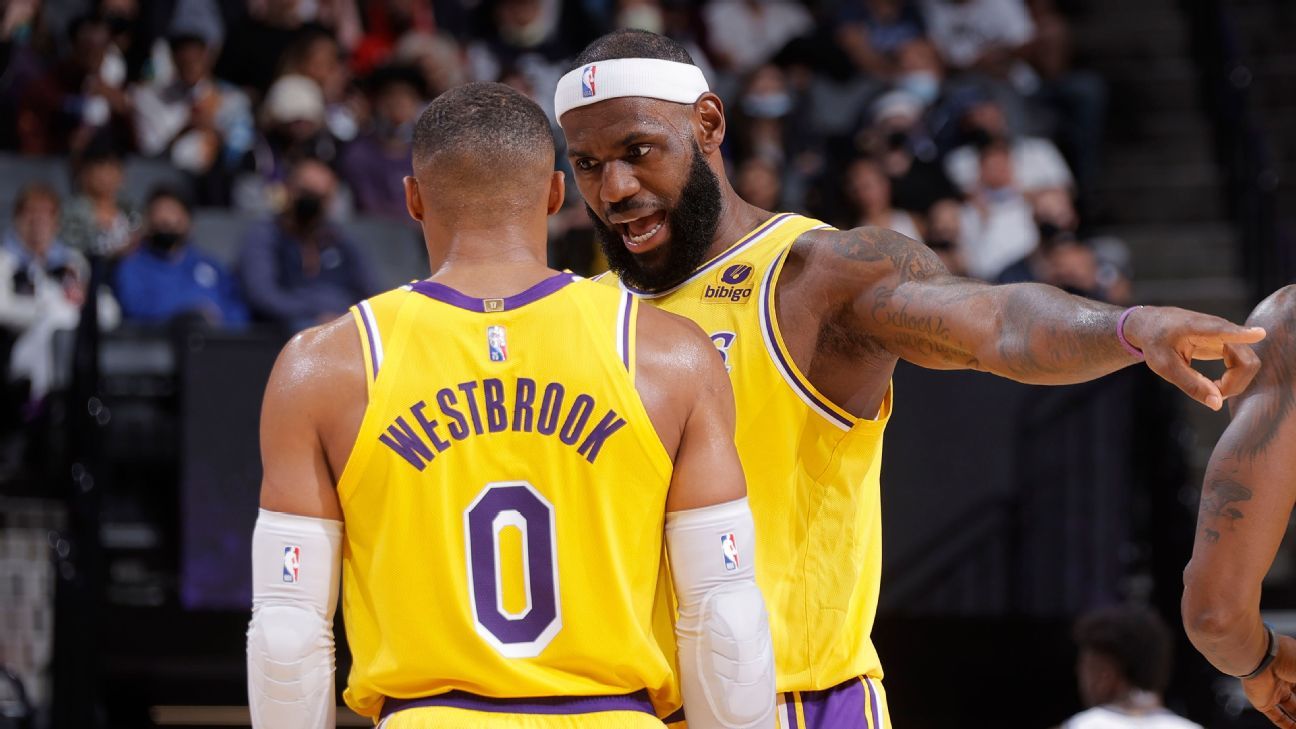 New Los Angeles Lakers are typically brought to owner Jeanie Buss’ second-floor office overlooking the practice floor at the team’s training facility. And with good reason: On a specially designed credenza under a wide window sit 11 Larry O’Brien trophies — the centerpieces of the building and the sources of constant motivation — in full view of the courts.

In late August, shortly after the Lakers acquired him in a blockbuster trade with the Washington Wizards, Russell Westbrook became the latest in a long line of stars to make their maiden trip inside.

“I’m so happy that you’re here,” Buss told the 2017 MVP in a moment that was captured for the cable television show, “Backstage: Lakers on Spectrum SportsNet.”

As she launches into what must be an all-too-familiar speech, Buss tells Westbrook about her father, late owner Jerry Buss.

“My dad bought the team in 1979, and his first year of owning the team was Magic [Johnson’s] rookie year and they won a championship that first year. And his goal in buying the Lakers was to someday surpass the Boston Celtics. So we’re now tied with 17 titles …”

“We know what we need to do then,” Westbrook said, jumping in.

That day and those sentiments are a hazy memory as the Lakers limp to the finish line of the regular season with a 31-45 record and an 11th place standing in the Western Conference, trying to claw their way into the last play-in tournament spot. But it’s a reminder this was a team the highest levels of the organization believed was championship-worthy.

The season’s dreams and its spirit have drained in a long road of disappointment, discontent and bad luck for the 2021-22 Lakers. Here is how it unfolded, in the players’, the coaches’ and management’s own words:

“Keep talking about my squad, our personnel ages, the way he plays, he stays injured, we’re past our time in this league, etc etc etc. Do me one favor PLEASE!!!! And I mean PLEASE!!! Keep that same narrative ENERGY when it begins! That’s all I ask.”

Pelinka: “When an opportunity like that comes, you’re thoughtful, you analyze it, you look at the pros and cons and you make a decision. That’s what leaders are tasked to do.”

Lakers coach Frank Vogel: “We’re going to be an extremely dynamic fast-breaking team and can play off all three guys in many ways. I think we’ve got a real chance this year to do something special. … Motivation for us is that trophy, not for what people are saying.”

Westbrook: “Being able to be with my kids all the time, being able to see my mom and dad and my wife all the time, to me is the best thing you can ask for. Not having to have them travel everywhere is a blessing for me.”

Before practice began, Pelinka spoke to the team, which was later shown on “Backstage: Lakers.”

Pelinka to team: “You could say this room has the greatest basketball talent assembled on a team in recent history. You could say that. But without the proper mindset as a team, that amounts to jack s—, and we know that.”

James to the media: “It was exciting helping put this team together this summer. Understanding what I felt and we all felt was going to make us a title-contending team. … I watch enough basketball to know what I need to do to help the ball club depending on the acquisitions we make per year. So I’m very cerebral about what I need to do for our team to be as great as we can be and to be the counterpart to what Russ brings to the table. … I always figure it out.”

During a timeout in an eventual 10-point loss to the Phoenix Suns, Anthony Davis approached Dwight Howard on the bench. They spoke, and Howard stood up to confront Davis, who grabbed Howard’s arm. They were separated by teammates as Davis pointed and yelled at Howard.

Howard: “We’re good. We squashed it. He’s my brother.”

Davis: “We left it in the locker room at halftime.”

November: Tales about the Lakers’ offseason begin seeping out

Portland Trail Blazers guard Damian Lillard, on Nov. 3: “[James] painted the picture to me that if I were to leave, the situation could look like this. He didn’t tell me to come to L.A., and he didn’t say anything to me that I didn’t already know other than what it could look like.”

Chicago Bulls guard Alex Caruso, on Nov. 9: “Essentially we got that [Chicago Bulls four-year, $37 million] offer, went back to L.A., asked if they could do the same, they said no. Asked for something else that was a little less, they said no. So I said, ‘OK, if that’s what it comes to, I’m ready to go to Chicago and start the next chapter.'”

Bulls guard DeMar DeRozan, on Nov. 15: “I felt like going to the Lakers was a done deal and that we were going to figure it out. I was going to come home. The business side of things just didn’t work out.”

Vogel: “There’s going to be criticism with this job. It’s something we’re all accustomed to. And I’ve been a coach for 10 years, I’ve seen it all.”

Stephen A. Smith breaks down why it’s time for Frank Vogel to leave the Los Angeles Lakers.

Westbrook: “Every year, my name is in trade [rumors]. It never, never, never seeps into how I approach what I do. … Regardless of if it did happen or if it didn’t happen, nothing’s going to change my mentality or my purpose. I feel like I have a purpose that’s bigger than basketball, and I always keep that as my forefront regardless of what happens inside of pro sports.”

Vogel: “The coaching staff works tirelessly, OK, both in analyzing our postgame, meeting with our players individually to show them ways that they have to be better, to reinforce ways that they were great, and they work tirelessly in putting together game plans.”

James: “I didn’t like what was going to come out of my mouth. So I decided not to speak with you guys.”

Russell Westbrook discusses his benching late in the Lakers’ win, saying Frank Vogel did not let him know ahead of time.

Vogel: “[I was] playing the guys I thought were going to win the game.”

James: “I’m not in the business of pointing fingers or pointing blame or trying to put a quote at the … start of someone’s commentary of where Frank is or where Russ is or where I’m at. It’s not my lane. … I’m going to the movies with my wife, I gotta go.”

Westbrook: “Surprised, yes. I was disappointed I didn’t go back in, but I’m more disappointed that we lost the damn game. I want to be able to be on the floor to help my teammates and be able to help our team win in games like that, but that was a decision that was made. I have accepted everything that has been asked of me and tried to do it to the best of my ability. … I’m OK with sacrificing some of the things that I’ve been able to do in this game to win, because that’s the most important part of this game.”

Feb. 10: Lakers stand pat at the deadline, and an All-Star declaration

Pelinka: “Throughout this process we had different things we looked at, and like I’ve done in the past, had conversations with LeBron and Anthony about it, and I would say there’s alignment here. And that’s all that matters.”

Vogel: “It’s a new day. I think there’s just a natural reset energy to our group, knowing that the trade deadline has passed. This is the group that we put together to start the year. This is a group we believe in.”

James: “The trade deadline is over. A lot of people got an opportunity to move on and know this is what we have, we are going to be together and now we make a push.”

Russell Westbrook vows to push back on “Westbrick” taunts at games.

Nina Westbrook: “When I’m being harassed on a daily basis over basketball games, and I’m having obscenities and death wishes for me and my family sent my way because you’re expressing your ‘truth,’ it’s hard for me to get on board with that.”

Westbrook: “I 100% stand behind my wife and how she’s feeling. This is just a game. When it comes to basketball, I don’t mind the criticism of missing and making shots. But the moment it becomes where my name is getting shamed, it becomes an issue.

“I’ve kind of let it go in the past because it never really bothered me. But it really kind of hit me the other day. Me and my wife were at teacher-parent conferences for my son. And the teacher told me, ‘Noah, he’s so proud of his last name. He writes it everywhere. He writes it on everything. He tells everybody and walks around and says, ‘I’m Westbrook.’ … And I kind of sat there in shock, and it hit me, like, ‘Damn. I can no longer allow people [to mock my name].”

Vogel: “He’s a part of our family. Anytime when a player is feeling any type of impact at home with his family, that’s of great concern and should be handled with care. I hope people can respect what he had to say.”

March 21: James says he’s having ‘the time of my life’

James: “I’m literally having the time of my life right now. The game is such a beautiful thing. … Yes, I get frustrated. I’m angry from losses and games we could have done better and things of that nature. But I mean, once I leave the arena and I get home, I’ll leave it there, and let’s move on to the next one.”

Compete for $40,000 throughout the NBA postseason! Make Your Picks

Vogel: “Every time the team is playing, he wants to play, unless there’s a reason for him not to play. … It doesn’t matter if he’s close to Karl Malone or looking at the bigger picture or not. For him to be doing that in his 19th year, I think is something the league needs as an example.”

Vogel: “We have to stay in the fight, and we have to give ourselves a chance. If we’re able to get into the play-in game at full strength, we know we got a shot.”