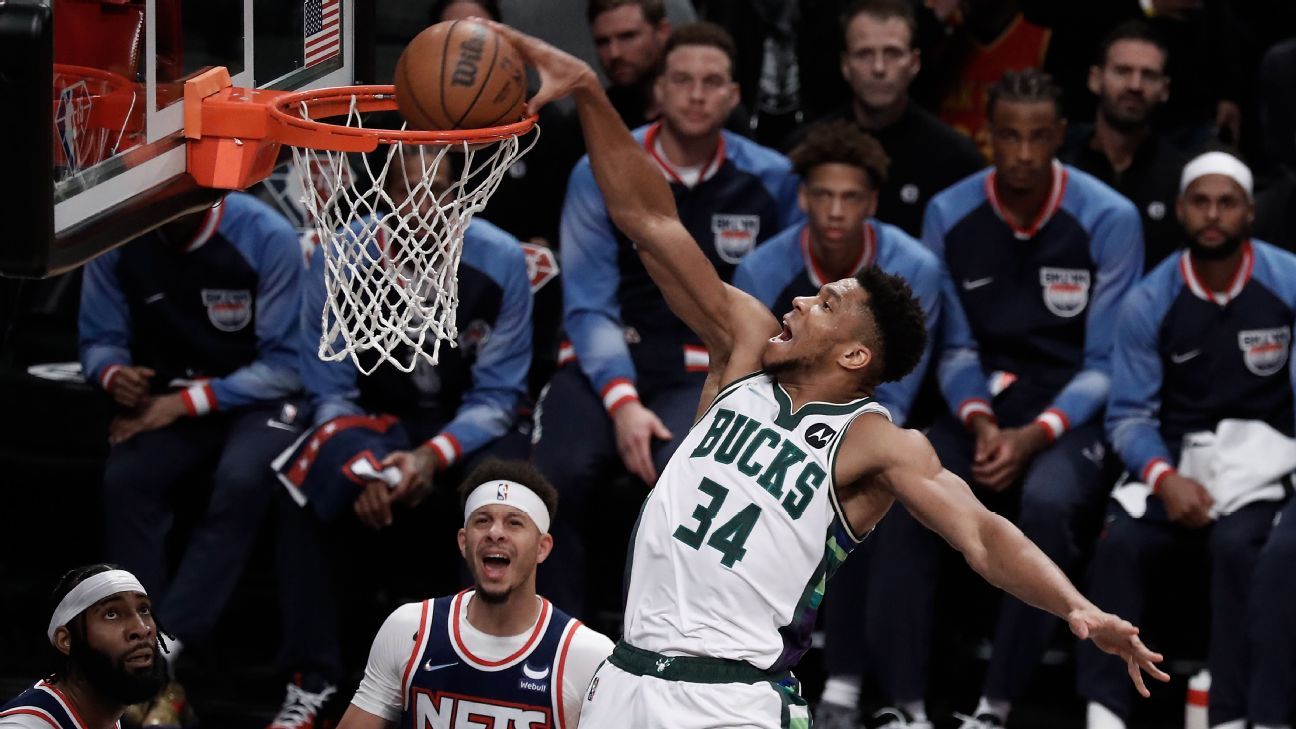 Antetokounmpo broke Hall of Famer Kareem Abdul-Jabbar‘s franchise mark of 14,211 points, scoring 44 points on Thursday to move his total to 14,216. As part of his monster night, he hit a game-tying 3-pointer with 18 seconds left in regulation that helped force overtime and then drained two big free throws with three seconds left in the extra frame to seal a 120-119 win over the Brooklyn Nets.

Antetokounmpo went 14-for-21 from the field, including 1-for-4 from 3-point range, and 15-for-19 from the free throw line while playing 39 minutes. He also had 14 rebounds and six assists.

“It’s good because I’m changing the narrative,” Antetokounmpo said with a wink while discussing the record. “I don’t want to be the guy only that dunks and runs. I can make a 3.”

Antetokounmpo’s performance came two days after he had 42 points, 14 rebounds, six blocks and three assists in a win over the Philadelphia 76ers. He did it all for a Bucks team that lost Khris Middleton with 5:05 left in regulation after he was ejected for committing a flagrant foul 2 on Nets guard Bruce Brown.

Antetokounmpo’s ability to raise his game has become so consistent that his teammates and coaches aren’t even surprised anymore.

“That’s definitely the MVP,” Bucks guard Jrue Holiday said. “That’s definitely Most Improved Player, which I’m not even sure he can get that at this point. He’s improved his game a lot and it’s shown — from the free throw line, to his fadeaway, to his 3-point shot. From last year to this year, it’s so much better. I felt like us kind of hanging on his coattails and being able to ride his coattail in that way gives us confidence as well.”

For all the accolades and records that Antetokounmpo continues to accumulate, the two-time MVP is taking it all in stride. After winning an NBA title and Finals MVP last season, he said he is only focused on trying to get the next championship.

Antetokounmpo said he has respect for Abdul-Jabbar and has said repeatedly in the past how much he’d like to stay in Milwaukee for his entire career, but he knows he will be judged on how much he wins.

“It doesn’t really matter,” he said of his latest achievement. “Because at the end of the day if you don’t have a successful season, if you don’t try and keep getting better and staying humble and staying happy, play all the way until May, June, nobody’s going to remember this.”

Antetokounmpo added: “So I just want us to stay humble. I want myself to stay humble. I felt like the more humble I get and the more hungry I stay, the more things I can accomplish. The more art I can create. Playing basketball is like creating art so — the more I can prolong my career. So I just got to keep staying humbled, keep trying to make my teammates great, win games, and good things like tonight will happen.”

As much as Antetokounmpo wanted to deflect attention for his latest record, his teammates and coaches knew how big of a deal it was for him and for the organization.

“Kareem Abdul-Jabbar is just one of the iconic players in our league,” Bucks coach Mike Budenholzer said. “And what he was able to accomplish in Milwaukee and then of course going forward, he’s one of the all-time greats. So for Giannis to pass him, organizationally, as our all-time career leading scorer, to have a front-row seat for the last three and three quarters, almost four years, I just feel incredibly fortunate. His teammates are beyond happy for him. … It’s beyond impressive what he’s done, and he’s got a lot more left ahead of him.”

Added Holiday: “He does everything. This man is doing everything. I don’t know how much more he can do. Average 60 points a game, but he’s damn near doing that.”

Antetokounmpo was given the game ball after the game and wore a smile on his face as he made his way to the podium. When asked if this is the best he has ever played in his career, he said, “I think this is the most mature I’ve ever been.”

“I’m over myself. I’m able to get to my spot better and execute and if the ball doesn’t go in, I’m OK with it,” Antetokounmpo said. “I think it’s called abundance mentality. I love what I’ve done in the past, and that gives me confidence and I’m able to go out there and execute without thinking, without having self-doubts about myself or think I’m not good enough. I’m kind of like OK with me.

“So that allows me to play good basketball. Mentally, I’m in a very good place. Now, physically I think I can still improve. I’m not as strong as I was two years ago, I don’t think. But I’m helping my team win games — I don’t know if this is the best I ever played, but I know I’ve got a lot of room to improve.”