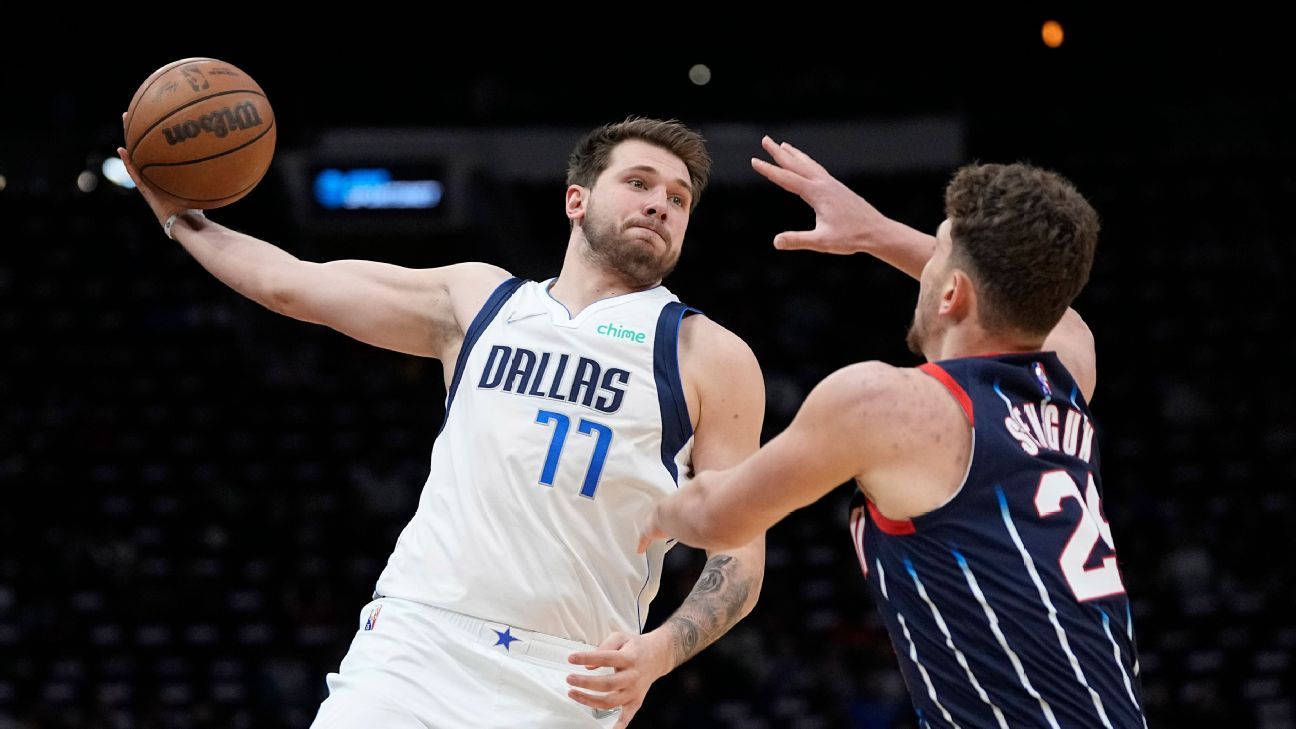 Luka Doncic drives hard toward the baseline after catching the ball on the right wing, muscling Memphis Grizzlies rookie Ziaire Williams en route to the basket and drawing three more defenders into the paint.

That kind of crowd can be problematic for a lot of guards, leading to a forced layup attempt over long arms, a bailout pass, or worse: a turnover.

For Doncic, the Dallas Mavericks‘ superstar and one of the NBA’s most gifted distributors, it means he has options.

Doncic leaps toward the basket, but Memphis shot-blocker Jaren Jackson Jr. finds the perfect position to protect the rim, his 6-foot-11 frame soaring above Doncic.

Doncic decides — on his way down, and it’s not like he hangs in the air for very long — that he wants to feed teammate Dorian Finney-Smith 25 feet away in the opposite corner.

A couple of problems with that plan: Williams and Jackson sandwich Doncic in midair, and Grizzlies point guard Ja Morant is positioned midway between the two Mavericks. Doncic squeezes the pass between Williams and Jackson, waiting for the help defender’s momentum to widen the window.

Then, a curveball — literally.

As he delivers the two-handed, overhead pass, Doncic snaps his right wrist, allowing a pass that is briefly headed for the end of Memphis’ bench to bend right into Finney-Smith’s shooting pocket.

Finney-Smith knocks down the corner 3 midway through the first quarter of the Jan. 23 home game, and Doncic moves on, not thinking much of the play until he picks up his phone after the 104-91 win, during which he dropped 37 points with 9 assists and 11 rebounds.

“Everybody was texting me after the game, ‘What a pass,'” Doncic says. “I didn’t know what they were talking about. I saw the video, and it was like a video game.”

Finney-Smith and the Mavs have learned to assume a pass from Doncic is always possible, no matter how difficult the delivery. “I’ve stopped being surprised, but he wows you sometimes,” Finney-Smith says.

Doncic possesses all of the elements necessary to be an incandescent passer. Mavs coach Jason Kidd, a Hall of Fame point guard who ranks second all-time in assists (12,091), marvels at Doncic’s ability to dictate tempo, methodically probing and manipulating defenses. Like all elite distributors, Doncic has the vision not just to see passing lanes, but to create them.

At 6-foot-7 with a 240-plus-pound frame, Doncic has the size to exploit passing windows that are unavailable to most point guards.

And, of course, Doncic has the combination of creativity and flair that makes watching him set up his teammates so much fun. There are times that Doncic needs to look away or deliver a pass between his legs to get the ball to his target.

There are also occasions, particularly when the Mavs have a comfortable lead, that Doncic decides to put on a show. Kidd calls it “a little bit of mustard,” an ingredient all the great passers have — with the exception of stick-to-the-fundamentals John Stockton.

“Luka magic, Luka magic — that’s what he does,” Mavs forward Reggie Bullock says. “He’s trying to get his teammates involved and it brings excitement to the gym.”

But there are three types of passes, in particular, that Doncic delivers often that fall into both.

“Sometimes you’ve got to put something extra on it, you know,” Doncic says. “Make it look good.”

Dwyane Wade didn’t necessarily want to compare the teenager from a tiny European country to LeBron James, his friend, former teammate and the unquestioned best player of his generation who just racked up his 10,000th career assist.

But Wade couldn’t think of anyone else who so efficiently and consistently makes a certain pass.

“Quote me right where I say this — it’s LeBron James-like from the standpoint of how he’s able to rope that pass to shooters in the corner, getting blitzed,” Wade said in February 2019 when he faced Doncic for the first of two times during the Heat great’s retirement tour.

“There’s not many guys who can do that and put it right there. He does an amazing job of it.”

That pass is typically thrown over a pair of defenders from high on the right wing to the left corner, traveling 50 or so feet in the air, which means it requires some heat to arrive without being intercepted.

“I think that’s the one I enjoy the most,” Doncic says.

Doncic can be so dominant as a pick-and-roll ball handler, both as a scorer and facilitator, that teams frequently opt for the strategy of blitzing him, trapping him with two defenders to force the ball out of his hands. Opponents help off of the shooter located in the far corner, because not doing so means Doncic can find the rolling big man for an easy dunk, even if it requires throwing a behind-the-back bounce pass between two defenders, as Doncic did to clinch a triple-double in a Jan. 14 win in Memphis.

However, cheating away from that corner shooter comes with significant risk against Doncic because of his ability to accurately fire those long-range lasers diagonally across the court.

“It’s a difficult pass because if you’re 6-3 or smaller, you can’t throw it,” Kidd says. “When you’re 6-7 or 6-8, your window is higher so you can throw that pass. That’s the advantage when you talk about Luka and LeBron. When you can create that type of space with that frame, he can make any pass that he wants.”

The payoff of this particular pass: a wide-open corner 3, one of the most efficient shots in the NBA.

“You’ve just got to expect the ball,” says Finney-Smith, a 45.9% shooter on corner 3s this season. “Even when he ain’t looking at you, he’s got eyes on you.”

Put yourself in Rudy Gobert‘s size-20 sneakers for a second.

A few minutes into the Utah Jazz‘s Feb. 25 visit to Dallas, Doncic runs a pick-and-roll with Powell and gets on-ball defender Royce O’Neale on his back as he comes off the screen. Jazz guard Donovan Mitchell waves toward Powell as he rolls to the basket, but he doesn’t impede the center’s progress, perhaps too worried about sagging off Bullock on the wing and giving up an open 3. The other Jazz defenders are concerned about shooters stationed in the corners.

It’s essentially 2-on-1 at this point, and that’s a tough assignment even for a three-time Defensive Player of the Year.

Gobert sets up around the dotted line, preventing Doncic from getting an easy path for a layup, and then does the awkward dance of slowly backpedaling, trying to simultaneously discourage Doncic from shooting a floater while recovering to prevent a lob to Powell. Doncic pulls a quick pitch of sorts, scooping a high, underhanded lob with his right hand after taking one more dribble, lofting it high over Gobert to Powell on the other side of the basket for an uncontested dunk.

Only the Atlanta Hawks‘ Trae Young — the player swapped for Doncic in a draft-night deal featuring two future perennial All-Star point guards — has more alley-oop assists than Doncic this season. According to ESPN Stats & Information, 92 Doncic lobs have led to buckets, while Young has 119.

Some of those come in transition, such as the no-look lob he threw to Finney-Smith from half court in a Feb. 8 win over the Detroit Pistons. The vast majority are dividends paid from Doncic’s pick-and-roll mastery, frequently on passes that look like floaters until he alters the angle at the final split-second, having forced the opposing big man to commit.

“As the big guy, you have to make a decision,” Mavs forward/center Maxi Kleber says. “Do I go back and not give up the lob? He has the layup or floater. Or, do I commit and maybe he has a bad pass over my hands? But he’s so good and tall that he can always find you on the lob.

“When he plays in a pick-and-roll, you can have a good option every time. He comes off it with so much patience and reads it so well, it’s just hard for defenses to guard him.”

Powell is the biggest beneficiary. He has finished 47 alley-oops from Doncic this season, trailing only Atlanta’s Young-to-Clint Capela (71) as the most prolific lob combinations in the league.

“You’ve got to pick your poison,” Powell said. “You want to take away his scoring as best you can, and 3s from the corner are one of the most deadly shots, so a lot of times the progression falls on the lob.”

There’s only one downside to being on the receiving end of a Luka lob. If you fail to finish, he probably won’t let you forget it.

“I tried to catch [one] backwards,” Finney-Smith said, shaking his head. “We talked about that one. He says he’s got more bounce than me.”

There have been a few occasions when Doncic has gone up as if he was shooting a floater, flipped his right wrist over and passed — in reverse — to an open shooter behind him.

“I think that’s kind of cool,” Kidd says. “It’s just that his wrists are so strong to be able to have heat on it. That’s one of the ones that I enjoy seeing or laugh at. That’s not an easy pass.”

Doncic actually seems to have figured out an easier version of his rear-view assist. Instead of beginning his shooting motion, he keeps driving and simply fires a blind, one-handed, over-the-head or over-the-shoulder pass to a shooter he assumes will be filling the open spot behind him.

“He doesn’t even look back, and you’re right behind him and he passes it over his back,” Kleber says. “He knows you’re there. It’s just high IQ. He knows — if the defense plays him a certain way, if both [defenders] stay with him — what area his teammate will be open.”

Doncic has even added another wrinkle recently — freezing the defender with a behind-the-back fake before delivering the no-look, backward dime, as he did to Caris LeVert before finding Kleber for a 3 early in the Mavs’ Jan. 29 win over the Indiana Pacers.

“He’s playing with all the tools,” Kleber says. “Everything with him is live, so as a defender, it’s really hard to guard him. That behind the back could be a pass, so you have to react to it somehow, and then when you react to it he finds the next option. … You have to honor everything he does.

“I guess as a kid he just must have played a lot and had a fun time, trying to [emulate] And-1 style. And he brings it to the game here.”