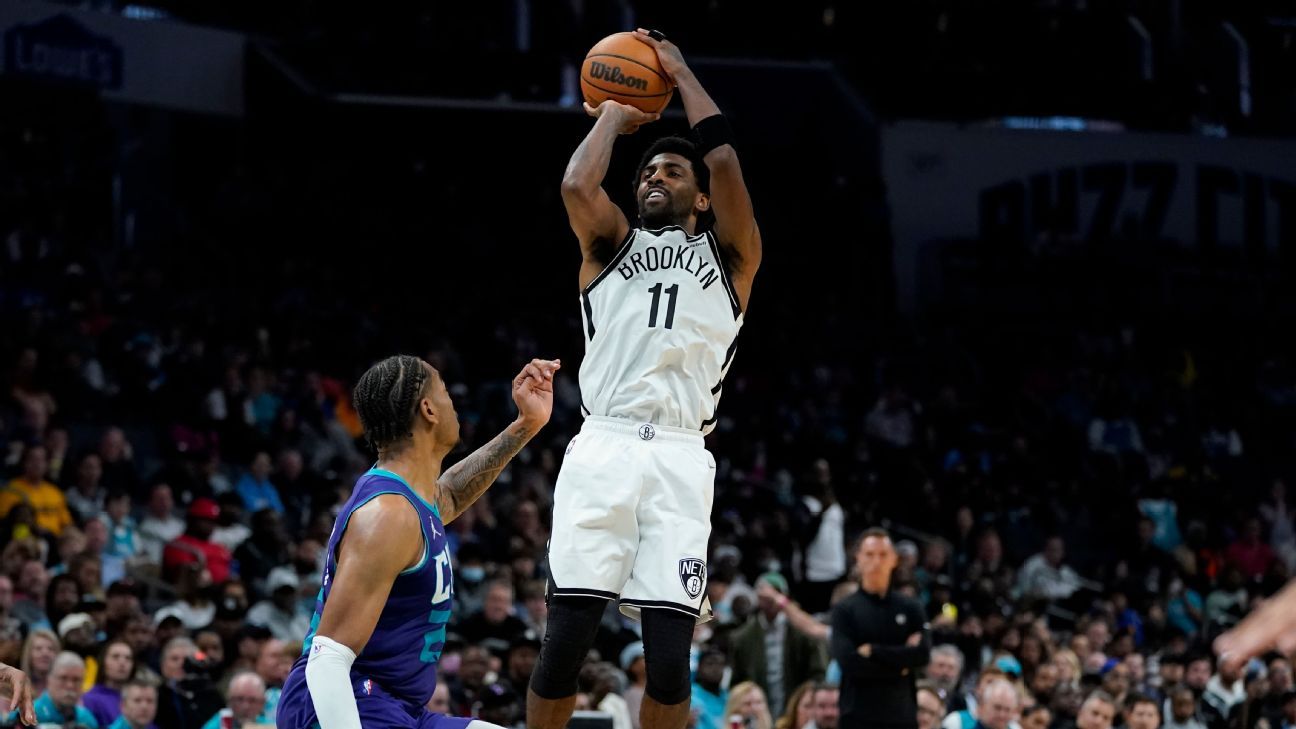 CHARLOTTE, N.C. — Kyrie Irving‘s 50-point outburst during Tuesday night’s 132-121 win over the Charlotte Hornets was so impressive that Kevin Durant spent the first few moments of his postgame news conference clapping for his teammate at the podium.

Durant called Irving’s performance a “master class” and said younger players should watch it to learn how he handled his business on the floor.

“Everything he does is pure,” Durant said after the game. “It looked so easy tonight. I look up, he had 10 points and it felt like he only took two shots in the first quarter. And I told Seth [Curry], I’m like, ‘Damn, I didn’t know he had it cookin’ like that.’ I seen it in his eyes to start the game. He wanted to play better last game, so he came out tonight and wanted to impact the game from the start. He led us all night, hit big shots when we needed to.

“It was just an incredible, incredible performance. Younger players, you should watch this game and learn what it takes to score at that level — at 5-10, 5-11, for him to score that easy, that was just a master class.”

Irving started the game in rhythm and kept knocking down shots all night, finishing 15-for-19 from the field, including 9-for-12 from 3-point range, and 11-for-13 from the free throw line. With the Nets entering the night having lost 17 of their past 20, Irving carried them to a much-needed win on a night when Durant scored just 14 points.

“It felt like a must-win night,” Irving said. “I’m not saying that the other nights didn’t feel like that, but you just got to go into that deep place where you just aren’t distracted by anything that’s going on and there’s a goal at hand when you step out there, and I just get less talkative and I have a look on my face where I’m just ready to go out there and just do what’s needed for us to get this win.”

Irving’s offensive brilliance was on full display. He hit an array of shots from all over the floor as his teammates continued to look for him and help him get looks. Irving also chipped in six assists and two rebounds in 37 minutes of play. Many in the Charlotte crowd gave him a standing ovation after he drained a floater to bring his total to 50.

“He’s incredible,” Nets coach Steve Nash said. “It’s a career highlight reel every night. So we obviously have a special player on our hands, and tonight he was unbelievably efficient and difficult to defend, and although we’d like to think we had the game in hand, there’s still possessions where he kind of bailed us out. … He’s just an incredible player, shot maker.”

Irving’s performance came after he struggled in a loss to the Boston Celtics on Sunday, shooting 8-for-18 and turning over the ball three times. He said he knew how many points he had as he drew closer to the 50-point mark.

“As a professional in this game, I just feel like we’re put into positions where we have to respond,” Irving said. “And obviously I didn’t play my best game in Boston. I was quoted the other [day] just saying it was really emotional and just every time I step foot in [TD Garden] it just is what it is, I’m human.

“So going back, I know we’ll see Boston again, but tonight we just wanted to have a fresh start, and I know that me coming out playing aggressive, it sparks energy in our team and it just makes everyone else’s job a lot easier. It felt good tonight just to do it in the flow of the game. It wasn’t really forced. I wasn’t trying to go out there and get 50. It just ended up happening.”

The Nets improved to 33-33, moving a game ahead of the Hornets for the eighth spot in the Eastern Conference. They get one day off before Thursday’s showdown with former teammate James Harden and the Philadelphia 76ers.

Following Thursday’s game, Irving, who is not vaccinated against COVID-19, will not be eligible to play again until March 15 against the Orlando Magic because of New York City’s vaccination mandate. The Nets play against the New York Knicks in Madison Square Garden on Sunday.

“Just damn special,” Curry said of Irving’s performance. “Just creating plays all over the floor. Got off to a great start, just kept it rolling throughout the game. He didn’t force too much. Knocked down catch-and-shoots, off the dribble, got to the free throw line, got to the rim.

“So we needed that Kyrie.”