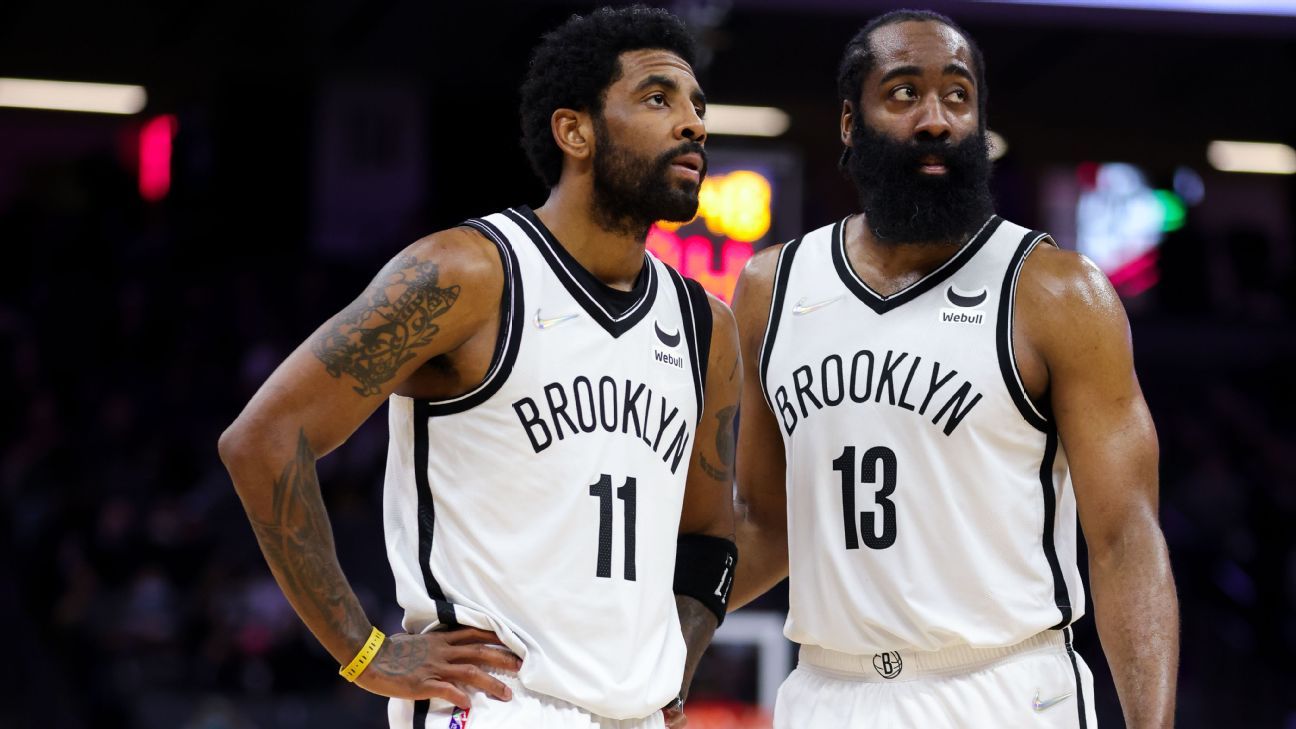 CHARLOTTE, N.C. — As the Brooklyn Nets prepare to see former teammate James Harden when they face the Philadelphia 76ers on Thursday, they do so with some lingering feelings on how he pushed his way off the team just before last month’s trade deadline.

Stars Kyrie Irving and Kevin Durant both addressed it after Tuesday night’s 132-121 win over the Charlotte Hornets.

“I thought we were in a good swing, but everybody has their own visions starting off seasons,” Irving said. “Everybody has their own visions starting off their careers and ending their careers. If that’s what James wanted, then I respect his decision and that’s just what it is. I wish him nothing but peace and love. We have a great friendship, but it didn’t work out. I wish things could have been communicated better for all of us as men, but hey, no hard feelings here with me or anyone else.”

Irving noted that he felt Harden owed a clearer explanation to some in the organization about he felt and that it could have been communicated better in the end. However, he has repeatedly said he holds no hard feelings toward Harden.

While Harden still hasn’t fully articulated all the reasons why he wanted out of Brooklyn, he did note at his introductory news conference with Philly last month that Irving’s decision to remain unvaccinated, and thus not be able to play in Nets home games, had an impact on him and the team.

For his part, Durant said he isn’t sure if anything could have been said or done differently to make Harden want to stay with the Nets long term.

“I don’t know,” Durant said. “When you look at it from his perspective, and you look up and Ky’s not playing and then I’m injured, he hasn’t won a championship before so he’s looking at — he’s 32 years old, I guess, he’s looking at himself, wanting to make a decision to get on a team that can kind of get into that contending, being one of the last teams standing.

Nets coach Steve Nash said he didn’t expect to catch up with Harden prior to Thursday’s game since he typically doesn’t get a chance to talk to opposing players.

“It will be a different feeling to play against him soon after the trade,” Nash said. “But it will be an exciting night for everyone to play and I’m sure the energy will be high. It will be a competitive game.”

Having played in many big games, Durant said he did not think the extra emotion in the building Thursday would make it that much different.

“When I was younger, 22, 23, you see a guy that just got traded and your emotions [are] everywhere,” he said. “You don’t know how you’re going to approach the game, because it feels like a big game because you’re playing against one of your former teammates, but it is what it is. It’s just another game for us.

Irving demurred just a bit when asked if he thought the Nets could have done anything different to keep Harden long term.

“Some of those questions, James could probably answer better,” he said. “I was coming in late into things and I was told one thing, and told another thing and the trade deadline comes up and now it’s a whole different situation. Now I’m answering questions about what happened; I don’t have a timeline of whether or not things could have gone better or not.”

As for the atmosphere, Irving said he is looking forward to what both Nets players and coaches believe will be a raucous environment in Philadelphia.

“It’s fun,” Irving said. “It’s fun. It makes for good stories, it makes for good narratives. It makes for good buildup for our league. It’s never too personal, but we understand that as competitors, we want to win the game. So go in there with a resolve, with a focus and just ready for whatever. We know the Philly crowd’s going to be what it is.

“Everybody likes to build that up, but specifically for us it’s not about any individual matchups. It’s about us going in there and just being a great team and building on what we set out to do.”