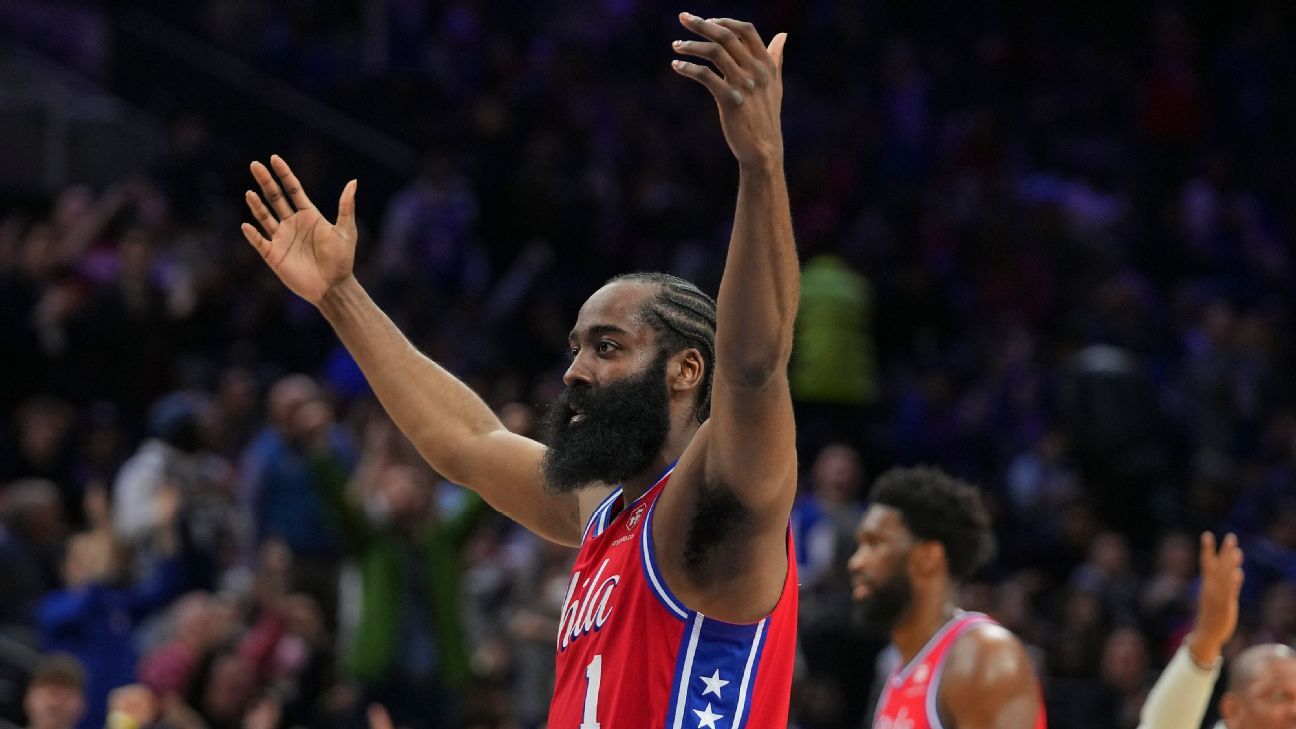 PHILADELPHIA — After a third straight sterling performance in a 76ers uniform — but a first in front of the fans here inside Wells Fargo Center — James Harden declared Philadelphia feels like home.

“Just exciting,” Harden said after finishing with 26 points, nine rebounds and nine assists in Philadelphia’s 123-108 victory over the New York Knicks in front of a raucous sellout crowd here Wednesday night. “The love, the fans, it feels like home. Just the love, the support, man, from looking around, hearing, ‘We love you James.’

“That right there makes me go out and play harder, and I just wanted to do whatever it takes to get the win.”

So far in a 76er uniform, Harden is 3-for-3 in that regard, as Philadelphia — combined with Milwaukee‘s last-second victory over Miami Wednesday night — now sits two games back of the Heat for the top spot in the Eastern Conference standings.

All anyone was focused on here, however, was Harden finally stepping onto the court in uniform in front of his new fans for the first time since Philadelphia acquired him in the blockbuster Ben Simmons trade with the Brooklyn Nets three weeks ago. Harden’s slow buildup from the hamstring injuries that dogged his final days in Brooklyn caused him to miss the team’s last home game, on Feb. 15, and saw him make his debut last Friday in Minneapolis against the Timberwolves before again playing Sunday at Madison Square Garden against the Knicks.

Both of those games, like Wednesday night’s rematch with New York, ended in Philadelphia victories. And while it is still extremely early in this grand experiment and far tougher opponents lie ahead, all involved are quite pleased with the early progress.

“I mean, we all just fit together,” said Joel Embiid, who finished with 27 points, 12 rebounds, four assists, a steal and two blocks in 34 minutes. “You’ve got someone in James that comes in with his experience and his playmaking ability, scoring ability and you add up what he adds and he’s been amazing, and what we have on the team. It all fits.”

It fits, in part, because of the continued emergence of second-year guard Tyrese Maxey, who has taken yet another step forward after impressing as the starting point guard all season when Simmons was away from the team seeking a trade.

Wednesday’s 25-point performance from Maxey was his third straight with more than 20 points since Harden entered the lineup. On Wednesday, 21 of Maxey’s points came after halftime, when he said Harden gave him a wakeup call.

“Well, James came up to me, and asked me if I was going to play today,” Maxey said with a smile of their halftime conversation, “and I told him, ‘Yeah.’

“We need him to be aggressive,” Harden said later. “I know it’s difficult because myself and Joel have the ball, but when he has an opportunity he needs to be aggressive.”

Ultimately, though, Philadelphia is going as far as its new superstar tandem of Harden and Embiid can take them.

When the 76ers were being introduced before the game, Eminem’s song “Lose Yourself” was echoing through the speakers and bouncing around the sold-out arena.

The song, all about seizing the moment and not letting what might be your one chance at greatness slip away, was an apt one when looking at the 76ers as a whole. The Harden acquisition was made with championships in mind — both for Harden, who is only lacking a ring on his first-ballot Hall of Fame resume, and for the 76ers, who haven’t won a championship in nearly 40 years and haven’t made the NBA Finals since 2001.

Beginning Friday, when the Cleveland Cavaliers come here, the 76ers play nine of their next 10 games against playoff teams before going on a five-game road trip to end the month — a far tougher stretch than the opening three games they’ve played in the Harden era.

For now, though, the 76ers will take the wins when they can get them, as they continue to try to build toward what, they hope, will be a long playoff run this spring.

“Every game for us is gonna be tough,” Harden said. “We’re new, we’re fairly new, we’re still learning each other. Every game is going to be a learning experience for us, and we’ve got to just find ways to continue to chip away, continue to get better, win or lose. Obviously it’s better when you win to figure it out, but it’s going to be great tests for us and we’re really looking forward to it.”