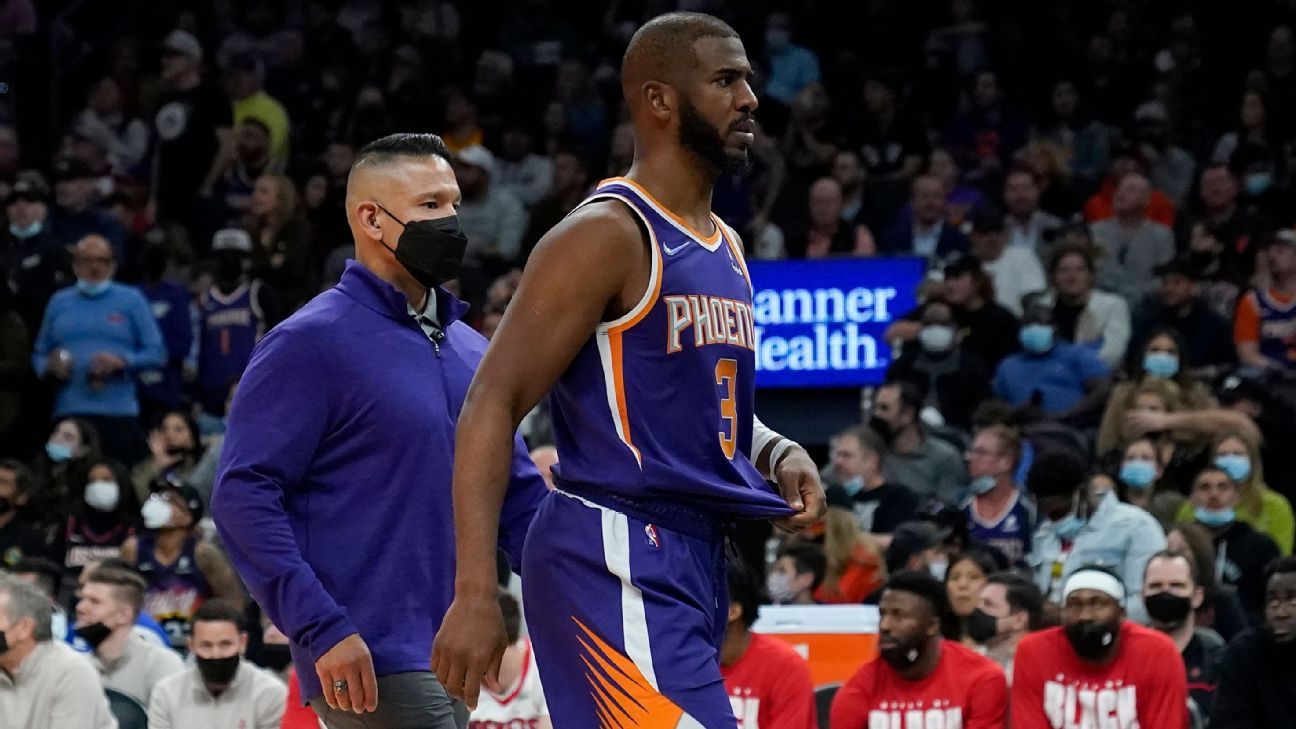 CLEVELAND — Phoenix Suns guard Chris Paul will be out for the next six to eight weeks due to an avulsion fracture in his right thumb, a source confirmed to ESPN.

The injury is a massive blow to a Suns team with the league’s best record and knocks the All-Star floor general out for at least the vast majority of the remaining regular-season schedule.

The regular season ends seven weeks from Sunday, on April 10. The playoffs begin on April 16.

Paul, who is averaging 14.9 points and a league-leading 10.7 assists for the 48-win Suns, hurt his thumb during the third quarter of Wednesday’s win over the visiting Houston Rockets. He was ejected for picking up a pair of technical fouls immediately after the play happened and was seen grabbing at his hand as he exited the court.

Paul came off the bench for Team LeBron on Sunday night less than an hour after the news of his injury first broke. He checked into the game for DeMar DeRozan with 3:49 to go in the first quarter. Paul was guarding his Suns teammate, Devin Booker, who half-heartedly tried to get him to fall for his own move — the rip-through to draw a foul — before firing up a missed jumper.

Paul, who was wearing a wrap on his right hand, had one shot at an assist, passing the ball to Jimmy Butler — who missed a corner 3-pointer — and then driving down the lane for a left-handed layup that he missed.

Afterward, Paul — true to form — swiped at the ball with his left hand after Rudy Gobert grabbed the rebound of his miss, and got called for a foul. The game then went into a timeout, and when play resumed Paul found himself back on the bench.

During his media availability on Saturday, Paul was asked several questions about his injury and while he did his best to evade them, he admitted it was frustrating.

“We’re 48-10, and if we do miss some time, I know the guys are going to hold it down,” Paul said. “There’s always going to be a frustration with injury. My hand surgeon is part of my family now.”

“I always want to play. When I felt that in my hand, I was mad for all types of reasons,” Paul added. “Obviously, we’re not going to [rush it]. I’m going to try to heal as fast as physically possible. The second I’m able to play, I guarantee you I will be playing.”

Phoenix is 6.5 games ahead of the Golden State Warriors and eight games ahead of the Memphis Grizzlies for the best record in the Western Conference — and the NBA — with 24 games to go in the regular season. The Suns entered the All-Star Break having won 21 of their previous 24 contests.