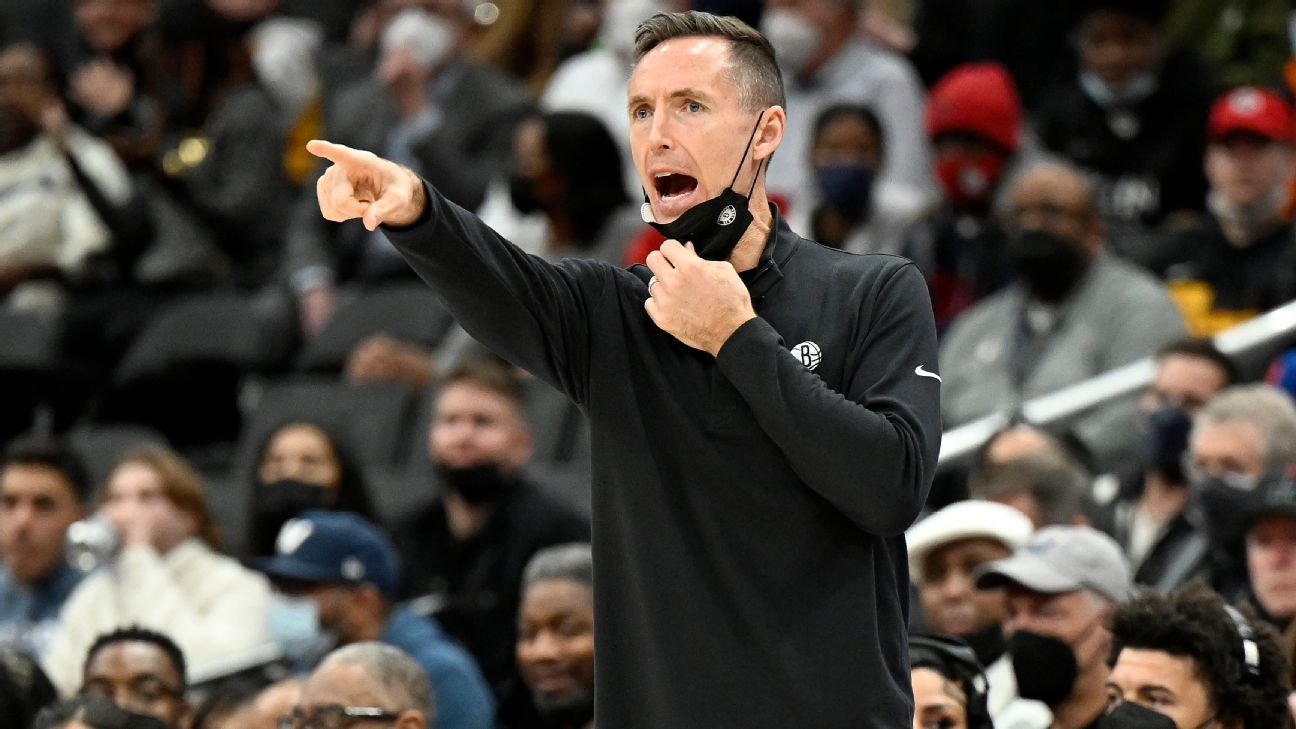 WASHINGTON — As the Brooklyn Nets closed the book on James Harden‘s brief tenure with the franchise, coach Steve Nash acknowledged he couldn’t help but wonder what might have been had circumstances worked out differently for Kevin Durant, Kyrie Irving and Harden over the past two seasons.

Speaking after Thursday’s 113-112 loss to the Washington Wizards, Nash reflected on some of the “what-ifs,” including last season’s playoffs, when the Nets bowed out in seven games to the Milwaukee Bucks in the Eastern Conference semifinals.

“You’re up 2-0 against the NBA champs, and then to not have James in the first games and then Kyrie in the last games, James being on one leg, Jeff Green being out of the lineup, all sorts of things that hampered our opportunity to win,” Nash said. “To take them to overtime in Game 7, you definitely think there are some what-ifs, but that’s life. You can’t look back. You’ve got to look forward.”

That was the message Nash pushed in the wake of Thursday’s blockbuster deal that sent Harden to the Philadelphia 76ers in exchange for Ben Simmons, Seth Curry, Andre Drummond and two future first-round picks. Nash said several times in recent days that Harden wouldn’t be moved, but once the deal became official Thursday night, Nash and his players wished Harden the best.

Irving said he and Harden shared “a mutual respect” and that he wished him well, but that he is excited about what lies ahead for the Nets.

“To be honest with you, and I think this is something that’s not spoken about often in our industry or in our business, you never really know what people are going through or what they’re going to decide to do,” Irving said. “And you’ve got to sit back and respect their wishes and that’s what I do.

“For James, we have so much history in our day and age even playing together or even just watching each other from afar, and it’s a mutual respect. I can’t really say that you feel that in the locker room, so to say, but we get hints. We just wish him well and we want him to be ultimately successful and now we move forward with the guys that are coming in and we’re excited.”

Nash said he reached out to Harden to wish him “the best of luck.” He admitted he wasn’t surprised that the deal happened, especially as reports of Harden’s desire to be traded to the Sixers became more apparent.

“I think in the last hours, as the hours ticked by today, it seemed more apparent,” Nash said. “But you’re never surprised. When I was asked those questions [about whether he would be traded], there was no conversation between the two teams.”

Nash reiterated that he had not spoken to Harden about his reported “unhappiness,” and said it was a “pleasure” to coach a “historic” player.

Irving expressed compassion for Harden’s situation, while noting that he didn’t try to convince Harden to stay.

“That’s not really my place, in terms of trying to convince somebody of something that he probably can’t see right now,” Irving said. “James probably couldn’t see what we were getting into. Obviously with my status being in and out, I saw a few things maybe that could have impacted things. But who knows, we got to wait for him — I can’t really speak for James.”

Irving added: “I think we’re also forgetting, too, where I’ve asked for a trade, and I understand it, so I’m not here to judge him. I’m not here to talk bad on James. He has a great family, he’s a great person. And I don’t want to separate that fact from anything. I just really want him to be happy. I want everybody in this league to be happy.”

In the short term, Nash said it was unclear when Simmons would be able to play for the Nets, given how long he has been out as he waited for a trade out of Philadelphia. He said it would be up to trainers to evaluate Simmons and “see where he’s at and what he needs to play.”

The Nets will enter Saturday’s game against the Miami Heat on a 10-game losing streak, but Nash said he still remains hopeful the Nets can win a championship this season, especially with the new additions and as the rest of the team gets healthy.

Nash said there was a “good chance” that Curry and Drummond would join the Nets in advance of Saturday’s game, but he was unsure if they would play. Durant (sprained MCL) is still at least a couple of weeks away as he continues his rehab. LaMarcus Aldridge (sprained ankle), Joe Harris (ankle surgery), Nic Claxton (left hamstring tightness) remain out as well.

“Yeah I think we always set our sights at that,” Nash said. “We’re excited by the pieces that are coming in. Obviously we’re on a time crunch a little bit and getting everyone healthy, gaining some cohesion and building a team that can flow and play at both ends of the floor, but we’re not taking our foot off the gas. We want to try to build and reach for the stars and try to have a sense of urgency with this new addition.”

Irving said that Simmons would be welcomed with “open arms” and veteran guard Patty Mills, who like Simmons is a native of Australia, was confident that the 25-year-old former All-Star wouldn’t run into the same problems he had in Philadelphia.

“I’ve got his back,” Mills said. “I’ve always had his back. And now I have the opportunity to be with him. So I’ve had his back from afar and I wish I was with him earlier in his career. But being able to do what I can from afar. So I’m excited to be able to be with him in this aspect. And help him in any way necessary.

“That’s how it’s always kind of been. But at the end of the day, I’m excited for this. And I know he is as well. For us to come together, I think it’s going to be great for both of us. For me, to continue to learn things and for me to share with him as much as I can as a professional and as an athlete.”

Irving, who still cannot play in home games because he is not vaccinated against COVID-19, says he remains hopeful that New York City’s vaccination mandate will eventually get pulled back and he will be able to be a full-time player again.

“Just keep praying,” Irving said. “Keep maintaining what I’m doing daily to be a great basketball player. Where those cards may fall, I’ll leave that to the politicians and everybody doing what they’re supposed to be doing on the front lines so I just respect that and see where we end up.”