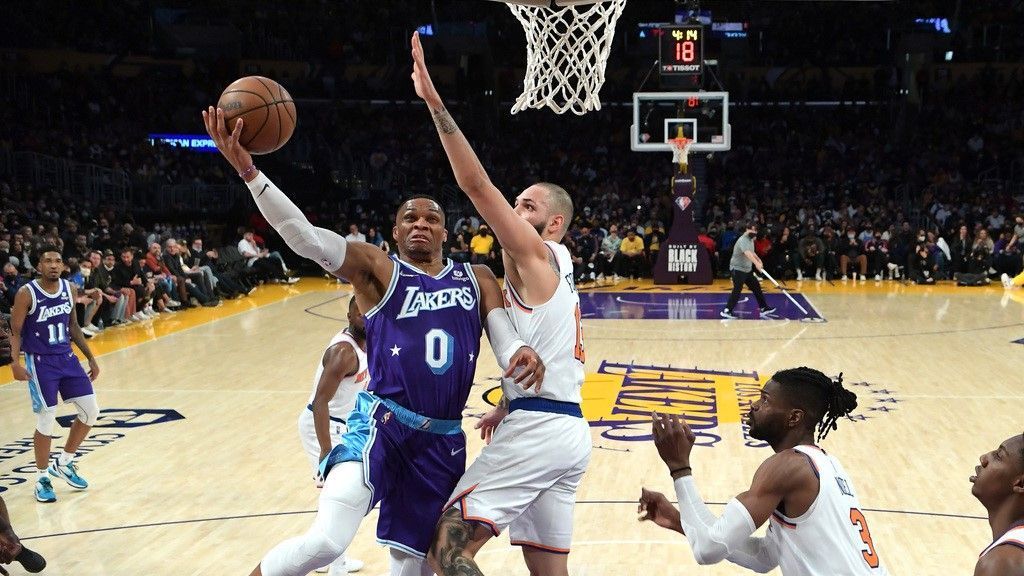 LOS ANGELES — For the second time this season, Russell Westbrook was benched by Lakers coach Frank Vogel to close out a game. Only this time, the Lakers won, beating the New York Knicks 122-115 in overtime on Saturday.

And the result made all the difference to Westbrook in accepting the decision.

“The best part of this game is that you win,” Westbrook said after scoring five points on 1-for-10 shooting with six assists and four turnovers in 29 minutes. “Guys competed. We won the game and that’s all that matters.”

Vogel, who kept Westbrook on the bench for the first six minutes and 30 seconds of the fourth quarter as L.A. built a six-point lead after trailing by as many as 21 early in the game, decided to take Westbrook back out in OT after seeing how the point guard closed the fourth.

Westbrook scored zero points, missing his only field goal attempt and going 0-for-2 from the free throw line and didn’t register any other statistics as the Knicks went on a 16-10 run to end regulation after he was subbed in to tie the score. Vogel went with a lineup of LeBron James, Anthony Davis, Malik Monk, Trevor Ariza and Talen Horton-Tucker in the extra session.

“That [fourth quarter] stretch was part of it,” Vogel said of his decision-making process. “I think obviously Russ was having a tough night on both sides of the ball and Bron was really going. So I knew the ball was going to be in Bron’s hands and I felt like we were going to get more from a defensive perspective and off-ball action with Talen, so … you just make tough decisions in the spirit of whatever the team needs to win a game.”

Westbrook was good natured while meeting with reporters after the game and explained how the experience felt different than nine games ago when he was pulled down the stretch of a 111-104 loss to the Indiana Pacers.

“I just talked to [Vogel] about that I was upset about it,” Westbrook said of the Indiana game. “But I was more upset I didn’t win the game. But not about when or how he would do it. But it doesn’t matter. Like I said, it’s not about me. I don’t want to make it about me. It’s more about our team and our guys. Tonight we got a good win and now move onto the next one.”

Acquired in a blockbuster trade on draft day, which included sending out two key contributors to the Lakers’ 2020 championship team in Kentavious Caldwell-Pope and Kyle Kuzma to the Washington Wizards to make it happen, Westbrook has become the poster boy for L.A.’s underachieving season. From his exorbitant salary of $44 million being the highest on the team to his high turnover rate and sometimes erratic shot selection, criticism has followed seemingly his every step since coming to his hometown team.

However, Saturday his teammates lifted him up.

“And I don’t need to harp on what we need to say to him. I mean, he’s a big-time player. And I have the utmost confidence in his ability, not only for this team but for himself, individually.”

The Crypto.com Arena crowd got on Westbrook with boos, first for a shot he took when he missed a midrange jumper badly off the side of the backboard in the second quarter with L.A. trailing and then for a shot he passed up when he was open in the corner behind the 3-point line late in the fourth.

“It can be frustrating,” Davis said. “The fans, obviously, want to see him play better. But one thing you can’t do is put too much pressure on yourself. You have to go out there and play freely. There were some shots tonight that he usually takes in rhythm that he kind of passed up or hesitated. Me and LB were telling him, ‘We don’t care if you miss every one. Just play. Shoot your rhythm shots. Don’t hesitate.'”

Westbrook downplayed his poor play, explaining that nights like Saturday occur over the course of an 82-game season.

It was just the 17th game that Westbrook, James and Davis have played together out of the 54 games L.A. has logged this season. Despite Westbrook’s sometimes shaky play, L.A. is now 10-7 in those games.

“It could be good,” Westbrook said when asked what could happen if L.A.’s Big Three can keep playing together down the stretch. “Just based on a night-in, night-out basis, establishing rhythm, it could be good. So hopefully we can see what that looks like moving forward.”