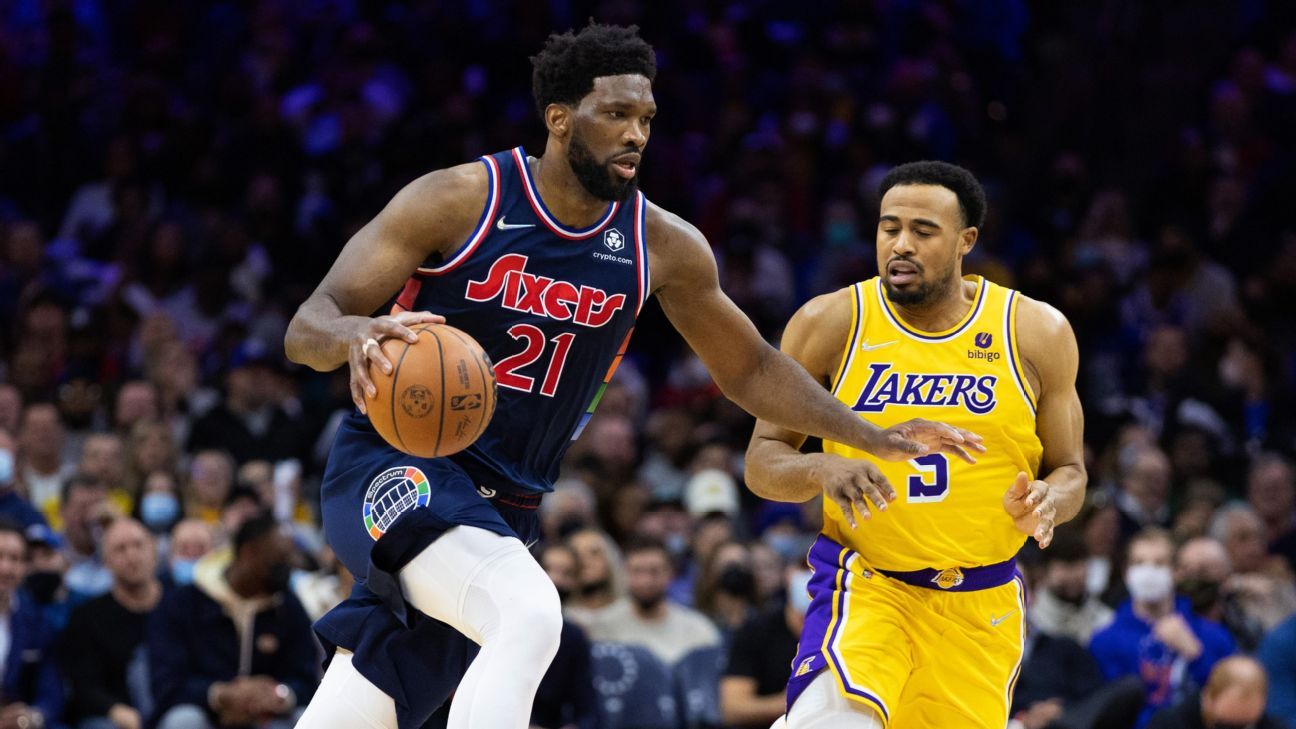 The NBA trade deadline is one week away. Which stars could be on the move?

Will Ben Simmons be one of this season’s impact players traded? While Simmons’ days in a Philadelphia 76ers jersey are likely over, the franchise has remained steadfast in its high asking price for the three-time All-Star.

Could the Indiana Pacers, likely headed for the draft lottery this season, break up their star big man duo of Domantas Sabonis and Myles Turner? Could the Los Angeles Lakers, currently battling for seeding among the Western Conference play-in contenders, surprise and pull off a blockbuster? Which team most needs to make a move right now?

Our NBA Insiders break down the biggest storylines, including one bold prediction for trade deadline week.

The specter of this saga haunts Simmons and the 76ers

Tim Bontemps: Fiction. Maybe this is just wishful thinking, but with Joel Embiid playing better than he ever has and the 76ers a staggering 27-11 when he’s available this season, Philadelphia has to make a move to get better right now. And while obviously making a terrible trade now would have long-lasting ramifications on the franchise, Philadelphia hired Daryl Morey precisely to make these kinds of trades. Also, it’s virtually impossible to see a scenario in which Simmons plays for Philadelphia again. So, if he isn’t traded now, is there any real certainty there will be a better deal available in six months?

Jamal Collier: Fact. Unfortunately, this situation doesn’t seem much closer to a resolution than a few months ago. The Sixers don’t seem ready to budge on moving Simmons, unless they get what they have deemed is the right return, and I’d guess they’ll have a better chance at getting that in the offseason.

Tim MacMahon: Fact, at least technically. Simmons will never put on a Sixers uniform again, but I do think he will remain on the roster after the trade deadline. I believe the smoke about James Harden bolting the Brooklyn Nets to reunite with Morey this summer. For that to happen, Simmons almost certainly needs to be included in the sign-and-trade or opt-in-and-trade.

Bobby Marks: Fact. Even with Embiid playing like an MVP, all the intel that I have gathered suggests that Morey is not bluffing when it comes to holding on to Simmons if the right package is not presented by Feb. 10. The something is better than nothing argument certainly makes sense with the East wide open, but Simmons is the last trade chip that Philadelphia has to upgrade its roster for the foreseeable future. Keep in mind that the Embiid’s $196 million extension does not kick in until 2023-24 and runs through 2026-27.

Kevin Pelton: More likely fact. At no point in this process have the Sixers seemed eager to trade Simmons for anything less than a king’s ransom, which led Sacramento to pull out of the running, according to ESPN’s Adrian Wojnarowski. I’m not expecting that to change in the next week, particularly with the hope of landing Harden this summer part of Philadelphia’s thinking.

2. Fact or fiction: The Pacers will break up their big man duo of Domantas Sabonis and Myles Turner.

Bontemps: Fiction. Once Turner left the lineup because of a foot injury, it significantly reduced the chances of this happening. Indiana always seemed more inclined to move Turner than Sabonis, and now moving him has gotten much harder. Instead, it seems like Indiana will be headed for its first top-10 pick since drafting Rik Smits — behind Bobby Marks in my best Marist alum rankings — and will revisit the possibility of breaking these two up at the NBA draft in June.

Marks: Fiction. Indiana should wait until the offseason when Turner is fully recovered. The danger in that thinking is if Turner comes back after the trade deadline and reinjures that same foot or perhaps the Pacers shut him down and teams are left wondering if he has fully recovered. As for Sabonis, unless a team like the Wizards allows the Pacers to pick any player on the roster outside of Bradley Beal, they should pass until the offseason.

MacMahon: Fiction. Myles Turner’s foot injury dents his value too much for it to make sense to move him now. Maybe something materializes with Sabonis that’s too tempting to not pull the trigger, but based on what I’ve heard, they’d rather keep him and move Turner, possibly this offseason.

Pelton: Fiction. I would’ve said “fact” before Turner’s stress reaction, but the injury complicates the efforts to trade Turner to a contender and Indiana has always seemed more likely to keep Sabonis of the two players. As a result, I think it’s more likely a move happens over the summer.

Collier: Fact. Turner’s comments earlier this season about wanting a bigger role and opportunity seemed telling of a player who wasn’t long for his current situation. This Pacers team has felt stagnant for a while, both in the standings and trajectory. It’s not working again this year, so now feels like the right time to go in a different direction.

MacMahon: Blah. Russell Westbrook isn’t getting traded unless the Lakers decide to ship their unprotected 2027 first-round pick to the Rockets in another Westbrook-John Wall swap, which would be a ridiculous overreaction to predictable fit problems. The Lakers don’t have the kind of quality, young talent and available picks necessary to upgrade via trade. Maybe they can add a rotation player or two via the buyout market.

Marks: Quiet. Other than the Lakers shedding the DeAndre Jordan or Kent Bazemore contracts, I don’t see a roster shake-up. The trades to acquire Anthony Davis in 2019 and Westbrook last offseason depleted the Lakers’ first-round picks and tradable contracts.

Bontemps: Boring. Yes, the Lakers will probably make a move or two on the margins — maybe with Talen Horton-Tucker, Kendrick Nunn and a pick, almost certainly moving someone like Jordan to save money — but the idea that some season-changing trade is going to arrive just seems extremely unlikely given the limited trade assets the Lakers have at their disposal.

Pelton: Anticlimactic. I’m not sure there will be much interest in the players the Lakers can use as matching salary (Horton-Tucker and Nunn, the latter of whom has yet to play this season due to injury), and a bigger deal involving Westbrook doesn’t seem particularly likely. As a result, I’m expecting only minor moves to clear roster spots.

Collier: Underwhelming, which at least will fit in nicely with the rest of their season. The Lakers almost certainly need a major roster overhaul if they’re going to become legit title contenders this season, but it’s hard to see how that materializes. The salaries on their roster are difficult to trade, and they don’t have many draft picks left. And is there anyone they’d be willing to deal who has actually improved their trade value this season?

4. What team most needs to make a big move at the deadline?

Collier: The 76ers. Have you seen the way Joel Embiid is playing lately? It doesn’t seem likely we’re getting any closer to a resolution on the Simmons saga, but swapping him out for an upgrade next to Embiid could vault Philadelphia into the next tier of contenders. The Sixers are getting an incredible year from Embiid; it would be nice to see them get the most out of it.

Bontemps: The 76ers. Embiid is playing better than he ever has, and both the league, and the East, are wide open. If there was ever a time to make a move, it’s now.

MacMahon: The Portland Trail Blazers. Portland has the perfect circumstances for a reset season. Damian Lillard should be shut down for the rest of the season after undergoing abdominal surgery, and trades for the rest of the Blazers’ veterans should be aggressively explored. This core has hit its ceiling. It’s foolish to chase a play-in spot, so it’s time for the Blazers to restock on assets — particularly draft picks — and test their luck with decent lottery odds.

Marks: The Washington Wizards. Washington has picked the wrong time to play uninspired basketball. After starting the season 10-3, Washington is 13-23 and fighting for a play-in spot. It also has the future of Bradley Beal hanging over the organization, as the guard will explore free agency this offseason. If there is a positive, it’s that Washington has 10 contracts ranging from $3.4 to $17.1 million. A negative is the Wizards owe the Oklahoma City Thunder a first-round pick that has protection starting in 2023 and ending in 2027. Because the pick is protected over five years, Washington is not allowed to trade a first-rounder unless the protection owed to the Thunder is amended.

Pelton: The Sacramento Kings. I generally subscribe to Billy Beane’s second rule of trading — “The day you say you have to do something, you’re in trouble” — but it does feel like change is necessary in Sacramento. And Harrison Barnes‘ value is likely to decline between now and the summer, when a contender dealing for him would get only one postseason’s worth of value. So I would aggressively seek a Barnes trade now.

5. What’s your one bold prediction for the trade deadline?

Marks: Jerami Grant remains on the Detroit Pistons. The forward is on the wish list of many contending teams, but Grant is under contract through the 2022-23 season and Detroit is not pressed to make a deadline deal now. If a home run offer is not presented, Detroit would be smart to wait until the offseason, even with Grant entering the last year of his contract.

Bontemps: Grant won’t be traded. There’s been plenty of talk about Grant leaving Detroit, but I’ll predict that the offers aren’t there to give the Pistons what they want for him, and that this is another situation that moves to the NBA draft before a possible resolution.

Collier: Myles Turner gets traded to the Warriors. This seems like the right fit for both sides. Golden State has a few young players who could help Indiana start a rebuild. Meanwhile, the Warriors could get a more proven player than James Wiseman as they aim to compete for a championship this season. Plus Turner, who turns 26 this month, can still be a part of the Warriors’ future.

Pelton: Three teams currently in the luxury tax (the Boston Celtics, 76ers and Trail Blazers) will make moves that bring their salary below the tax line to share in the distribution of historic tax payments from Brooklyn and Golden State.

MacMahon: Nobody moved at the deadline will be an All-Star in the near future, if ever again. The best player to move might be somebody like De’Aaron Fox or CJ McCollum. Don’t hold your breath for the sort of blockbuster deal that impacts the balance of power in either conference.