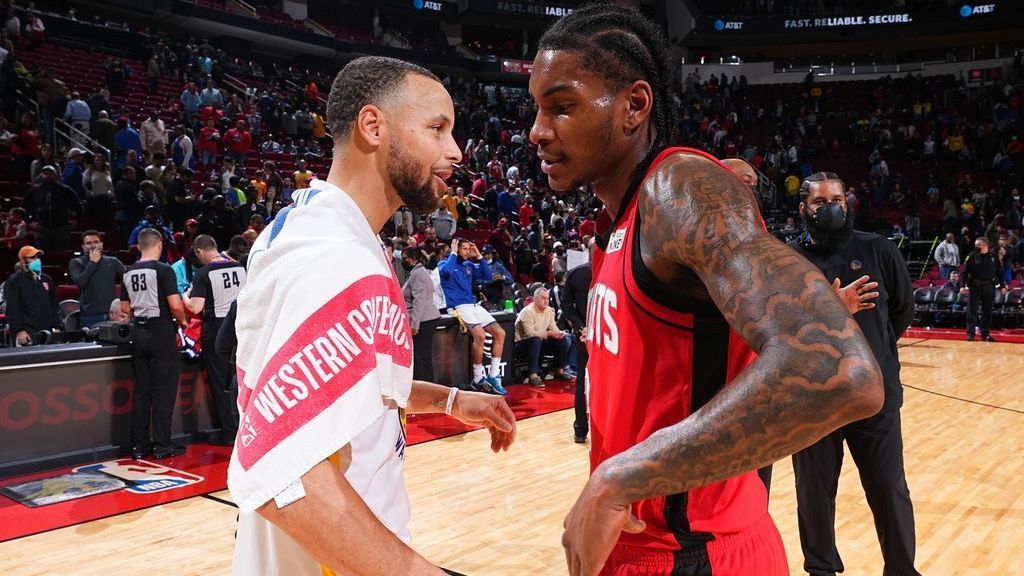 HOUSTON — For the second time in 10 days, the Houston Rockets were giving the Golden State Warriors every inch of fight they had in them. And for about three quarters, it looked to be wearing the Warriors down.

But then in the fourth, Stephen Curry erupted. He scored 21 of his 40 points in the final frame giving Golden State enough juice to get the 122-108 victory. And it all started with Kevin Porter Jr.s’ trash talk on Curry.

“It’s a nice game within the game,” Curry said. “It’s not the first time and it won’t be the last time. I started bringing it to another level. You always have it, but you definitely bring another level of competitiveness when you have fun stuff like that. I take it all as entertainment, but sometimes you need a little boost.”

Curry was held to 10 points in the first half and had hit just one 3-pointer. His splash brother, Klay Thompson, had also made just one three. Andrew Wiggins — who finished with 17 points — was doing all he could to keep the Warriors afloat, but he needed help.

In the third quarter, while Curry was catching his breath and waiting for the ball to be inbounded, Porter matched Curry’s position — both with the hands on their knees — with his face right over Curry’s shoulder.

And the trash-talking ensued. But it was all one-sided. Curry never said a word back to Porter.

“I think he’s unfazed by it, to be honest,” Juan Toscano-Anderson said. “He finds it comedic. I mean, he’s great. He’s gonna do what he does … What do y’all say? Steph’s gonna Steph.”

Porter understood that as much as anyone, as after the game the third-year guard went up to the two-time MVP and asked him for advice.

“I went up to him and I asked him for some pointers,” Porter said, according to the Houston Chronicle. “Being MVP, first unanimous, that’s someone I can learn from. He’s been doing this for so long. People get comfortable with what he’s capable of doing. It’s not really a surprise. But seeing him play like this is definitely something to learn from.”

Curry went 7-of-10 from the floor in the fourth, including 4-of-7 from three. His 21 points that period are the most he’s scored in a fourth quarter during the regular season. The only time he’s scored more in the fourth in his career is when he put up 23 points in the final period of Game 6 of the 2019 Western Conference Finals. That game was also against the Rockets.

“We’ve seen Steph do that a million times,” Kerr said. “It was bound to happen, even though it’s been a couple of weeks. Not surprising but it’s fun to see him shake free and have a game like he did.”

As Kerr alluded to, Curry’s night was a breakout performance from a turbulent month of January. Though, there has never been any level of concern.

Earlier in the day, Curry and Kerr had a conversation about Curry’s recent shooting numbers. Kerr told Curry that he has never worked with another player who he is hesitant to discuss shot selection with.

There’s an understanding between everyone at the Warriors that Curry’s shooting will work itself out, and there’s not much more to be done about it other than wait.

Monday’s game in Houston is an example of why.

“You always feel like the next shot is going to start the vibe like that,” Curry said. “Obviously, it’s no secret how I’ve been shooting the ball recently. But the confidence is always like, it takes just one to ignite a night like that in the fourth quarter.”

Curry’s confidence has always been high, and it’s remained high during this slump because he approaches each game with the belief that his game and the work he puts in will show through eventually. He calls it the “major even-keeled approach.”

He never doubted that he would find his shot, no matter what. But Porter’s trash talk expedited the process.

“I don’t react, but it’s a little adrenaline rush,” Curry said. “Whatever gas that’s got to go in the tank to get you out of a low point I’ll take.”