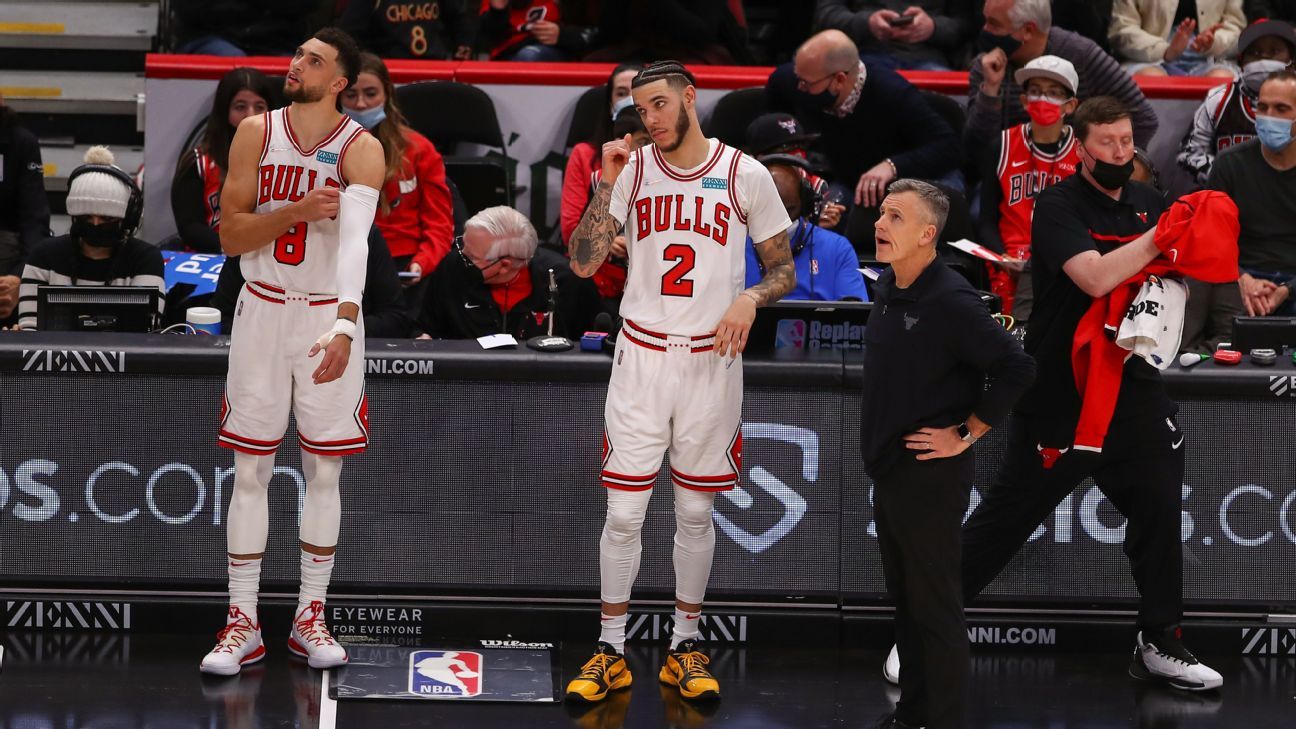 Chicago Bulls guards Zach LaVine and Lonzo Ball will not travel with the team for its upcoming road trip while each recovers from his respective knee injury, coach Billy Donovan said prior to Wednesday night’s game against the Cleveland Cavaliers.

It will leave the Bulls without their starting backcourt for, at least, the next three games. The Bulls begin a three-game road trip on Friday night in Milwaukee and do not return home until next Wednesday against the Toronto Raptors.

Neither LaVine or Ball has played since Friday’s loss to the Golden State Warriors.

While Donovan said he is encouraged by how well LaVine’s left knee soreness is responding to treatment, he acknowledged Ball’s status is more uncertain.

Ball missed his third straight game Wednesday with what the Bulls have determined is a bone bruise in his left knee, but he did not respond well to the initial treatment, according to Donovan, who did not have a timetable for his return.

“Now they’ve switched to a different kind of treatment for him and they’ll see how that treatment works out,” Donovan said. “Then there’ll be another step after that if we need to be. Right now it’s more just trying to help him get healthy.

“When he was on the road with us and didn’t play in Boston, there was some treatment he was given, didn’t really respond great to that, met with a doctor, there’s another set of treatments going on right now. Then we’ll probably know more [once] we see how it responds to that.”

Donovan was asked whether surgery was a possibility for Ball — who is averaging 13 points, five rebounds and five assists in 35 games in his first season in Chicago — but he said “we haven’t gotten to that point.”

“A lot is gonna depend on how he responds to the treatment of what he’s getting right now,” Donovan said. “That’s why there’s a reason to get him back as soon as possible from Memphis, because you just don’t want to waste days for any player.”

LaVine has been sidelined since aggravating his knee in the first quarter Friday against the Warriors, but he has been able to get back on the court for some light basketball activities. The Bulls are missing their second leading scorer in LaVine, who is averaging 24.9 points on 49% shooting in 38 games this season. However, Donovan said they still want him to test out his knee running and jumping before he is cleared to return to the court.

“He has responded well,” Donovan said. “I don’t have a return date for him at this point, but certainly he feels a lot better today than he did coming out of Golden State.”