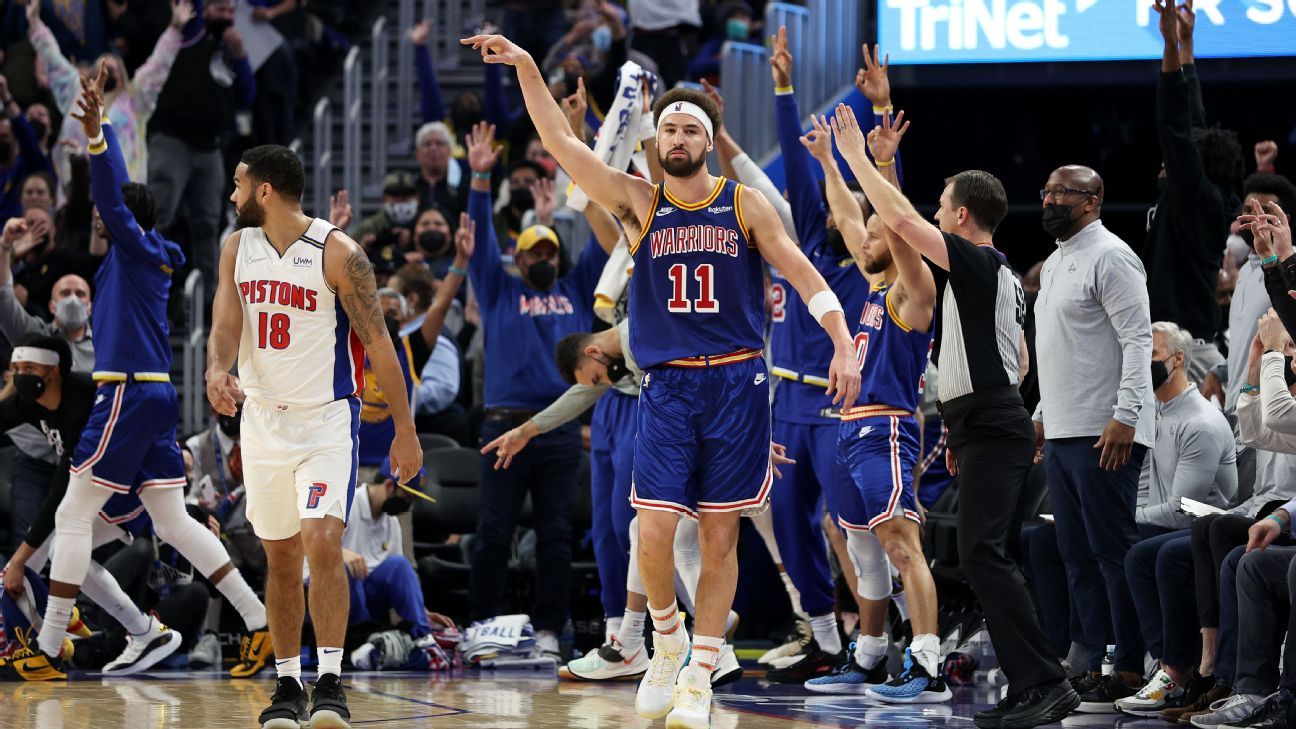 SAN FRANCISCO — Klay Thompson knew he needed to use the same patience he learned over the past 2½ years and apply it to his shot coming back. And for the most part, it looked to have paid off in the Golden State Warriors‘ 102-86 win over the Detroit Pistons on Tuesday night.

“Oh, yeah, no question,” Thompson said when asked whether his performance was his best since returning to the court. “Made some shots, made some tough shots on the move. … I was just happy to see the ball go through the rim.”

Thompson led the Warriors with 21 points on 6-of-13 shooting, including 3-of-8 from 3. It was the first time Thompson topped the team in scoring since posting 30 points in Game 6 of the 2019 NBA Finals — the game in which he tore his ACL. It also was his highest-scoring performance so far in his return and best by field goal percentage (46.2%).

“He’s getting his legs underneath him, for sure. He’s looking better and better, and his wind and conditioning has improved,” Warriors coach Steve Kerr said.

Thompson is shooting 35.7% from 3 in his five games since returning from his 941-day hiatus. Most of his misses have been short, but as his legs get back underneath him, as Kerr says they are, the Warriors expect those shots to come back.

Neither Thompson nor his team has ever been concerned about his shot. It’s what he does. And until it completely returns, they’ll live with the misses.

His favorite shot of the night was the last one he took in the first half: “A classic corner 3. Just a pump fake, side step, knock it down,” he said.

Since coming back, Thompson has added another dimension to his offense as a playmaker and a rim attacker.

“Steve was just holding me back,” Thompson joked about not creating as many plays for others before this season.

According to Kerr, the Warriors didn’t previously need Thompson to be a facilitator, as he was playing alongside Kevin Durant and Stephen Curry. But now, it’s something this current roster could use more of.

As for his increased efforts to attack the basket, Thompson takes it as a sign of good faith that his body is where it needs to be. He also said it has helped him get into rhythm as his shot from distance catches up.

Outside of Thompson having his best individual performance since returning over a week ago, the team believes it was the most cohesive it has played as a unit — particularly, the way Thompson and Curry played together. Curry finished with 18 points on 7-of-10 shooting, including 4-of-7 from beyond the arc, reminiscent of the days when the Splash Brothers played together at Oakland’s Oracle Arena.

“It happens so fast. [Thompson] and [Curry] heat up so fast,” Golden State forward Andrew Wiggins said. “When they do, it’s damn near impossible to stop.”

In the third quarter, Curry went back to the locker room for several minutes after banging his left hand on a deflected ball. He returned with a bandage wrapped around his left middle finger — the opposite hand that held him out of the Warriors’ game at the Minnesota Timberwolves on Sunday. Kerr doesn’t believe it’s anything serious.

Tuesday’s performance was the first piece of evidence for the Warriors that their patience so far has been paying off. But there’s more needed, as they wait at least two weeks for Draymond Green to return from a disk issue in his lower back and for Andre Iguodala to come back after sitting out against the Pistons.

But there is confidence that their patience will once again be worth the wait.

“I cannot wait for that day,” Thompson said.