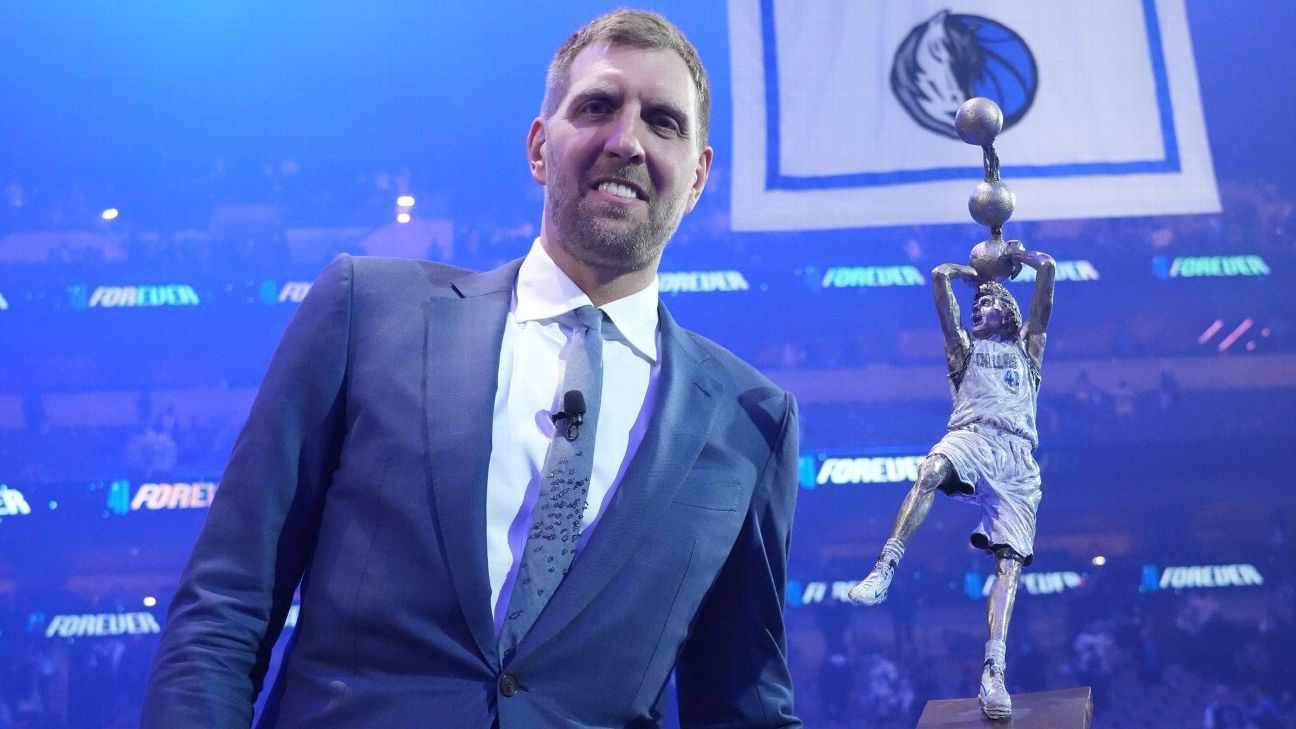 DALLAS — Dirk Nowitzki watched and listened to two tribute videos and three high-profile speakers Wednesday night before he finally took his place behind the lectern, which featured “41 FOREVER” on the front and was set up in the center of the American Airlines Center court for a postgame ceremony in which the Dallas Mavericks raised his number to the rafters.

True to form, Nowitzki started his speech with a self-deprecating story, recalling how nervous he was on the flight from Germany to Dallas after being drafted in 1998 and how touched he was by the reception at the airport. A large crowd showed up to welcome him, holding signs and cheering Nowitzki, making him feel that “Dallas was the spot to be,” he recalled.

Years later, Nowitzki mentioned to a Mavs employee how special that moment was to him.

Nowitzki, of course, made a massive impact on Mavs fans during his surefire Hall of Fame career, setting an NBA record by spending his entire 21-year career with one franchise, delivering Dallas’ lone NBA title in 2011 and earning a long list of accolades, including a league MVP award, a Finals MVP and 14 All-Star appearances. He also soared to sixth on the all-time scoring list with 31,560 points.

The Mavs’ 99-82 win over the Western Conference-leading Golden State Warriors served as a warmup act Wednesday night. The main event was the ceremony honoring Nowitzki, as the sellout crowd of 20,441 eagerly remained in their seats, greeting him with “MVP!” chants as he walked to the middle of the floor.

Mavs governor Mark Cuban, who formed an extraordinarily close bond with Nowitzki after buying the team in 2000, unveiled a model of the statue that will soon stand outside the arena.

“I want everybody to see your greatness forever, Dirk,” Cuban said. “So your name is on the court. And even though you didn’t want it to happen, your silhouette is on the floor. And one of the things we do so that all future Mavs fans and all future players will always know your greatness is, we put your numbers up in the rafters.

“But that’s not all we do, Dirk, because I want everybody to see more of you and because I made you a promise. I’m going to keep my promise.”

With that, Cuban removed a black cloth that was covering the model of the statue, which features Nowitzki shooting his famous, one-legged fadeaway jumper. The crowd roared its approval.

Nowitzki’s 20-minute speech consisted primarily of him thanking dozens of people. Nowitzki expressed gratitude to all three of his head coaches, citing specifics of how Don Nelson, Avery Johnson and Rick Carlisle helped him on his journey to becoming an all-time great. He thanked his teammates, particularly Michael Finley and Steve Nash, the ones who provided “guidance so much in the beginning when I was homesick.” He made a point to mention several behind-the-scenes people, such as team security, public relations employees, equipment managers and so on. He thanked his family, including his wife, Jessica, and three young children.

“I always tell you guys, find your passion in life and work hard,” Nowitzki said, speaking to his kids. “And great things can happen.”

Nowitzki included Holger Geschwindner, his longtime mentor since his teenage years in Wurzburg, Germany, as part of his family. Nowitzki laughed as he said he thought Geschwindner was “a weirdo” when they first met before coming to appreciate his unconventional training methods, such as doing leapfrogs across the court or dribbling while listening to saxophone music, and especially his unwavering loyalty.

“I know you don’t love the limelight,” Nowitzki said to Geschwindner. “You’re a shy and modest guy, but this is as much about you as it is about me.”

A theme of the ceremony was also honoring the 2010-11 championship team. More than half the players from the roster attended the ceremony, seated in chairs set up about 20 feet from the lectern, across the court from the 41 members of the Dallas Symphony Orchestra who played music.

Mavs head coach Jason Kidd, the point guard on that team, was one of the keynote speakers along with NBA commissioner Adam Silver and Cuban. Kidd, wearing a green No. 41 Mavericks jersey, praised Nowitzki for changing the game and setting “the standard for what it means to work and win.”

“We’re giving out 10-days,” Kidd said, referring to the short-term contracts. “You want to come back?”