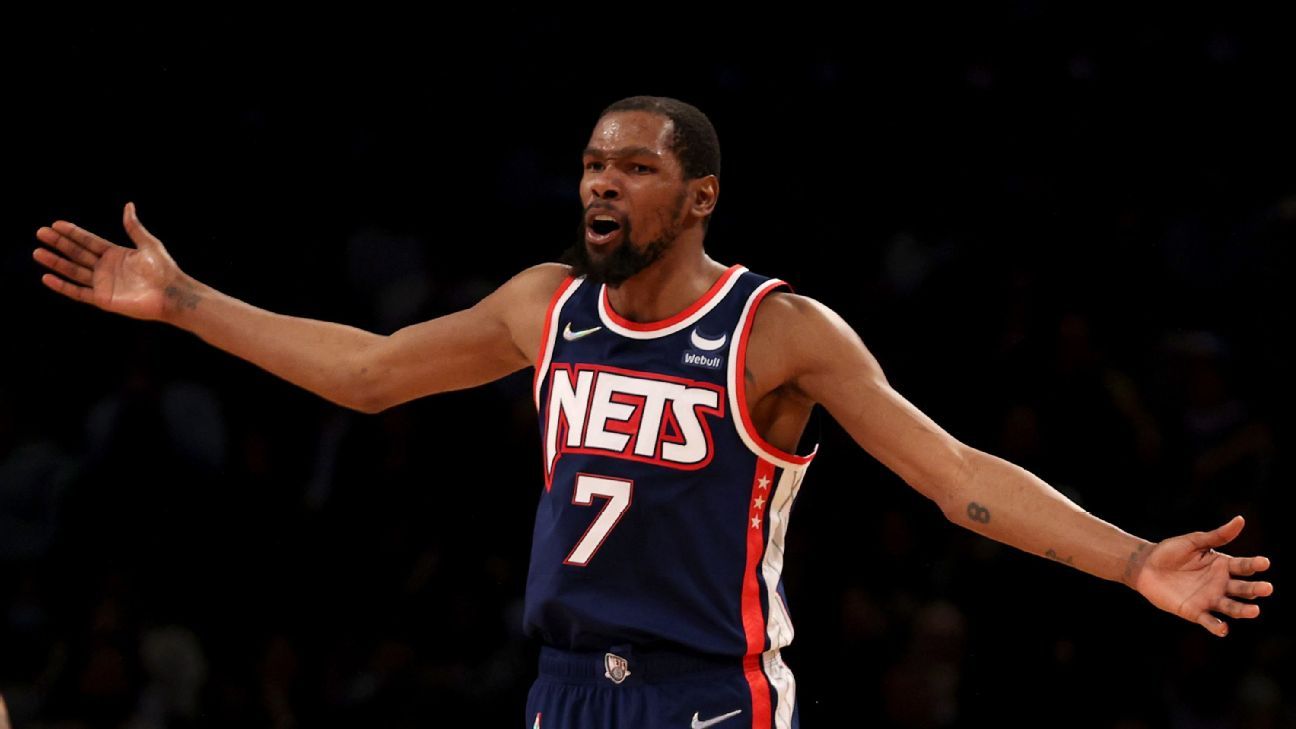 NEW YORK — Brooklyn Nets star Kevin Durant didn’t mince words after a disappointing 120-116 loss to a severely undermanned LA Clippers squad on Saturday night. He was frustrated by not only the fact that the Nets dropped their second straight game, but that they did so against a team he thought Brooklyn took for granted.

“We just relaxed too much,” Durant said. “We get up 10, miss a layup or turn the ball over, and they get a fast break, give up a 3, straight-line drive — like coach [Steve Nash] said, we didn’t deserve to win this game. We came in here with a f—ed-up attitude. Thinking we were just going to walk into a W.”

The Nets allowed a Clippers team — playing without Paul George (UCL tear in right elbow), Kawhi Leonard (right ACL rehab), Nicolas Batum (right ankle sprain) and a variety of other players who are dealing with a combination of injuries and health and safety protocols, as well as coach Tyronn Lue (health and safety protocols) — to hang around all night. Both Durant and Nash acknowledged the team’s intensity wasn’t where it needed to be from the start.

“It’s natural when a team is missing so many players,” Durant said when asked why the Nets’ attitude was the way it was. “They’re going through so much over there. [We] relaxed. You don’t think you could lose an NBA game like this. They’re missing how many guys? They’re playing guys that are up from the G League. Xavier Moon came in and hit some shots for them. Keon Johnson, James Ennis — they all made an impact I felt on the game, and I think we came in too chill to start.”

The Nets added to their own issues by turning the ball over 15 times — but it was the lack of attention to detail, especially on the defensive end, that did Nash’s group in.

“I just think [giving up] 71 points in the second half is unacceptable,” Nash said. “We just never really had the care factor. Turned it up, we had a chance up nine, 10, 11 in the third and fourth at different times and just took our foot off the gas and got what we deserved, really. All those guys in there, I think they know it, they’re disappointed of course, but it’s a disappointment for all of us — that was obviously a very winnable game that we let get away.”

Nash said his team would have to take the performance “to heart and rebuild” moving forward. Nets guard James Harden said he didn’t know why the “care factor” wasn’t there for a Brooklyn team that is now 23-11 on the season.

“I’m not sure,” Harden said. “That’s a good question. I don’t know. Obviously, I knew we wanted to win — it’s just, are we willing to do the things to secure the win or to do what we’re supposed to do? And I don’t think we did that from the beginning of the game and we give a team confidence and let them hang in the game for four quarters and stuff like this happens.”

Durant, who was as outwardly frustrated as he has been in a while, is hoping his team will learn from its mistakes after such a poor performance.

“Hopefully a loss like this, it’s in your brain until [Sunday],” Durant said. “Go out there and understand what your job is as an individual and how you can be the best at that job and how you can bring it to the collective. It’s always about the collective. So if you ain’t feeling like s— after this game, then you got to look yourself in the mirror.”

Nash noted that both players and coaches needed to speak up in the wake of that kind of loss.

“Obviously I tell them that can’t be us,” Nash said. “And that can’t be the level that we are gonna accept. And that we have to decide what’s acceptable for us and what’s not.”

Durant echoed a similar sentiment when asked how confident he was that the Nets would be able to bounce back after this type of loss to a much weaker opponent.

“We’re going to continue to get our ass kicked if we don’t approach the game in the proper way,” Durant said. “It’s about the group. It’s about how we’re going to come out here and be the best that we can each possession. Tonight wasn’t one of those nights.”