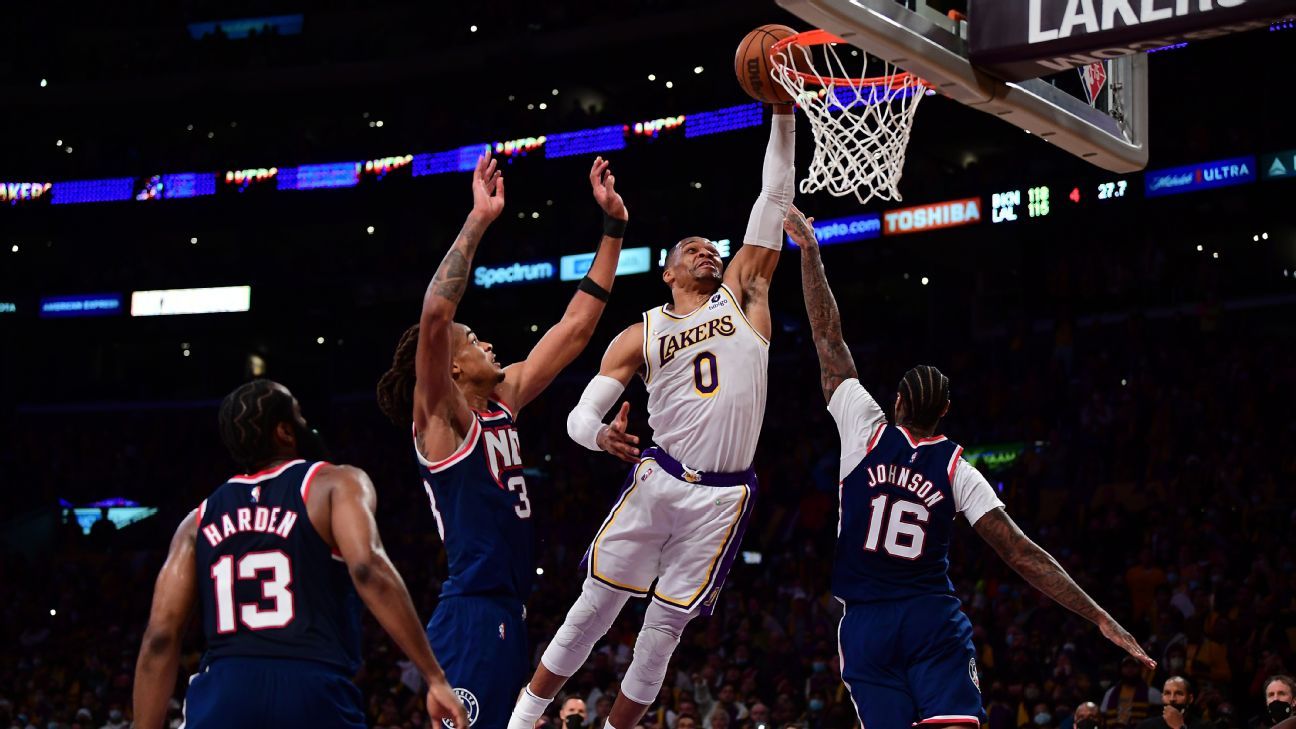 When the NBA schedule makers locked in the Los Angeles Lakers and Brooklyn Nets to play on Christmas Day, the vision was to pit L.A.’s big three of LeBron James, Anthony Davis and Russell Westbrook against Brooklyn’s Kevin Durant, Kyrie Irving and James Harden in a star-studded affair.

Thanks to a left knee injury to Davis and health and safety protocols for Durant and Irving, half those stars weren’t on the court in the Nets’ 122-115 win on Saturday.

Despite having two of its marquee names compared to just one for Brooklyn, L.A. still ended up on the losing end for the fifth straight game to fall to 16-18, eighth place in the Western Conference. And while Westbrook’s resume as a nine-time All-Star and former league MVP warrants him a mention in company like James, who scored a season-high 39 points, and Harden, who had a 36-point triple-double, his play on Christmas didn’t.

The Lakers point guard shot 4-for-20 from the field, finishing the game with 13 points, 12 rebounds and 11 assists with five fouls and three turnovers.

Westbrook left Crypto.com Arena without speaking to reporters, but James spoke up on his behalf and focused on what the 14-year veteran did well, rather than highlighting Westbrook’s struggles.

James dismissed the 16 misses, including an 0-for-3 mark in the fourth quarter that was punctuated by a missed dunk that got blocked by the rim with 26 seconds remaining that could have brought L.A. within one, as an “off-shooting night.”

Instead, James lauded Westbrook’s “spectacular” decision making that led to the guard’s double-digit assist total and pointed out how five of Westbrook’s rebounds came on the offensive glass, which meant more chances to score for the Lakers.

“He gave us extra possessions, he gave us a lot of looks around the basket, which I know that he can’t stand [failing to convert] as well,” said James. “But as far as the effort piece, if a guy plays hard, if a guy leaves it all out on the floor, I got no problem with that. It’s a make or miss league.”

Lakers acting head coach David Fizdale, filling in for Frank Vogel while he is in protocols, said that Westbrook’s expectations of himself in this, his L.A. homecoming season, have caused him to press the issue.

“A big part of it is he just wants it so bad,” Fizdale said. “I mean you can just see it in him, everybody does. He wants it so bad. And I know that’s just hard for him when it doesn’t work out. And I know he cares like crazy. … I just want him to take a lot of that pressure off himself, keep attacking, keep playing the way we know he can.”

There is value in the fact that Westbrook has played in all 34 games for L.A., while James has missed 12 and Davis has missed seven already and is expected to be out for at least another month while recovering from a sprained MCL in his left knee.

There was just such a stark contrast in Westbrook’s production compared to James’ on Saturday. In the 37 minutes Westbrook played, the Lakers were outscored by 23 points. Meanwhile, the Lakers were a plus-nine in the 40 minutes that James was on the court.

Fizdale, who was an assistant coach with the Miami Heat when James helped lead the franchise to two championships and four straight Finals appearances, lamented not being able to capitalize on James’ strong play.

“But to watch it, to be a part of it, even though those games are turning into L’s, I’ve never seen anything like this guy. And we better sure as hell be thanking our lucky stars for this guy.”